CHILDREN IN THE RAIN 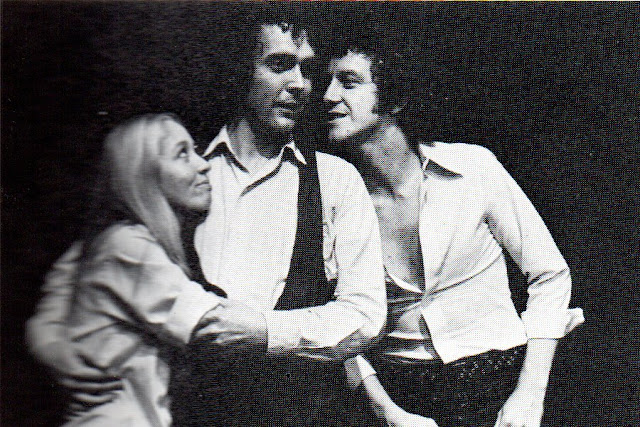 Reviews of live theatre being impossible during these days of the pandemic, THEATRE'S LEITER SIDE is pleased to provide instead accounts of previous theatre seasons--encompassing the years 1970-1975-for theatre-hungry readers. If you'd like to know the background on how this previously unpublished series came to be and what its relationship is to my three The Encyclopedia of the New York Stage volumes (covering every New York play, musical, revue, and revival between 1920 and 1950), please check the prefaces to any of the entries beginning with the letter “A.” See the list at the end of the current entry.

A structurally loose slice-of-life drama about three actors who take refuge in an abandoned theatre during a rainstorm, set up a picnic on the stage, and take drugs, going from pot to acid. Max (Lane Smith) is a failed actor and painter; Twig (Elizabeth Harryman) is a famous actress married to Max; and Gibbs (Frank Giordano) is a dancer, who turns out to be gay.

As the trio becomes stoned, each begins to release a flood of secrets—including Gibbs’s thing for Max—and it all ends with Twig being killed by her spouse. During the proceedings the actors toss food around, paint each other with ketchup, and talk endlessly. On opening night, at one point, a pickle landed in the face of a critic’s husband. At another moment, one of the actors slipped in the onstage potato salad and fell off the platform into a critic’s lap.

The rambling purposelessness of the play offended one and all. Dick Brukenfeld was typical when he assailed the work as “painfully close” to being “the worst play” he had ever seen. Martin Gottfried described it as “a childish play,” overwritten and underclear, not very sure of what it is about or where it means to go.” Playwright Dennis McIntyre would eventually overcome this setback with more effective plays, including Modigliani and Split Second.