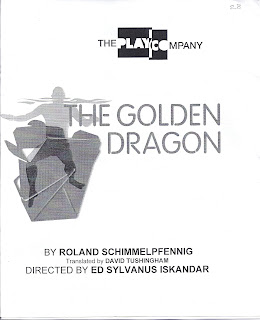 
It was warm and sticky in Greenwich Village last night, and by the time I made the 10 to 15-minute trek through the narrow, crowded streets from the W. 4th Street subway station to the New Ohio Theatre at 154 Christopher, where THE GOLDEN DRAGON is playing, I was dripping with perspiration and longing to sit in an air conditioned space. But the minute I got to the theatre lobby, I was asked to take a set of headphones and go on a 15-minute "soundwalk," listening to the attached MP3 instructions as I went. With the headset on, which was like wearing earmuffs in Bermuda, I walked out of the building and was told to look across the street at the Chinese restaurant and wonder what was really going on inside. As odd music played in the background, I was instructed to walk west toward the Hudson River, with occasional comments about what was happening inside the buildings across the way, or with requests to run my hand along the railing in front of an apartment building or across the rough bark of a tree. I was cautioned at street corners to cross carefully, or to watch out for bicyclists, and once I reached the river, was told to hold on to the railing and look deep into the water, contemplating what secrets lay beneath the murky surface. I then was asked to turn back toward the theatre, again being cautioned about the bike riders, but at this point I noticed a slim, middle-aged man walking a breed of dog very familiar to me because it was the only one I ever owned. “Basenji!.” I nearly barked (although Basenjis are incapable of barking), and the man lit up but, rather than simply acknowledging it was indeed a Basenji, engaged me in dog talk all the way back to the theatre. The fact that he was gay and I was alone had NOTHING TO DO WITH IT! So I missed the second half of the otherwise needless headphone narration and gave my ears the pleasure of feeling the balmy breeze coming off the Hudson.

Outside the New Ohio Theatre
Inside, I met my companion for the evening, who had listened to the headphones without taking the walk, and walked through hanging Asian fabrics forming a sort of hallway into the theatre, where we were greeted with a strikingly modernist set designed by the increasingly visible Mimi Lien, with five actors dressed in variations of white kitchen attire. The A/C was at full blast, but I was now really drenched so I took advantage of the wet, hot, rolled paper towels (what the Japanese called oshibori) distributed by the actors from stainless steel bowls to audience members. And, as I gradually became more comfortable, the play began.
The hallway outside the theatre
THE GOLDEN DRAGON is a German-language play by Roland Schimmelpfennig, whose name is a play unto itself. It is receiving its New York premiere (there have been 20 productions worldwide) under the brilliant direction of Ed Sylvanus Iskandar, the Indonesian, sarong-wearing director who was a Drama Desk nominee last season for his memorable staging of Amy Freed’s RESTORATION COMEDY at the Flea. Each staging of this play appears to have invited its director to explore innovative theatricalist ideas, but since this is the only one I’ve seen I can testify to the enormously creative job Iskandar has done in turning a not especially inviting work of dramaturgy into an exciting evening in the theatre running only an hour and a quarter.

The action is set largely in a Thai-Chinese-Vietnamese restaurant, but also in the apartment house above and a neighboring convenience store. Like the multi-ingredient meals the cooks in the kitchen prepare, each of them identified by the actors by their number on the menu and what goes into them, the play is itself a chop suey of many scenes, covering multiple topics, like illegal immigration, globalization, exploitation of immigrant workers, greed, and sex. There are several stories crosshatching the dramatic landscape, all within a combination of expressionist and realistic theatrical styles, with comedy jostling alongside tragedy, and with even an allegorical plot line about a cricket exploited by ants threading its way through the action. Stage directions, including “Pause” or “short pause,” are spoken by the actors along with their dialogue. Most prominent is the material about a Chinese boy working in the kitchen who has a rotten tooth that is wrenched out of his mouth by his fellow workers and lands in a bowl of Thai soup being eaten by a blonde flight attendant who, rather than being disgusted by it, seems so fascinated by the tooth she sucks it, enjoying both the tasty traces of its bloody and soupy taste until they vanish.


For me this was a triumph of style over substance, however, with Iskandar and his movement assistant, Erica Fae, creating numerous sequences of balletic kitchen work, sexual activity, shadow dancing, and so forth, as the actors carry on in a streamlined, open, rectangular white box (outlined in a thin strip of neon) that floats above the stage proper, with a trap door through which actors often enter or disappear, and with a stainless steel backdrop in front of which the kitchen activity takes place. Men play women and vice versa, even when a woman, playing a man, has intercourse with a man playing a woman. The white kitchen uniforms designed by Loren Shaw serve throughout for all roles, with barely any changes. Everything is precisely timed, and a constant sound track of music and special sound effects, designed by Katie Down and performed at audience right in view of the spectators, is one of the chief delights, especially when bings, dings, and rings are used to highlight moments of movement or other stage activity.  Similarly engrossing is the colorfully fantastical lighting of Nicole Pearce, who continually finds new and impressive ways to surprise your eyes with striking effects.


The cast of Noah Galvin, Peter Kim, K.K. Moggie,  Stephen Duff Webber, and Welker White, each of whom plays more than one role, forms an excellent ensemble, making THE GOLDEN DRAGON breath with true theatrical fire.
Posted by Samuel L. Leiter at 8:18 AM