15, Review of NIKOLAI AND THE OTHERS 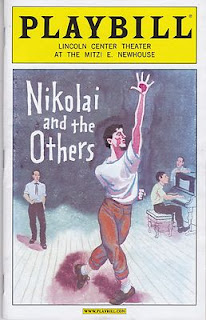 15. NIKOLAI AND THE OTHERS


Chekhov is hard enough for Americans to act and direct convincingly when it’s actually Chekhov you’re acting and directing. The problems are compounded when you’re doing pseudo-Chekhov, even when its creator is Richard Nelson, whose Apple family plays, as most recently represented by SORRY, share some of the Russian master’s ability to create subtle and moving drama and comedy out of the small details of everyday family life. Those plays’ characters are American, so their idioms and customs carry the touch of authenticity brought by an American playwright. But when, as in NIKOLAI AND THE OTHERS at Lincoln Center's Mitzi E. Newhouse Theatre, you have a play with a cast of eighteen characters gathered at the sprawling converted farmhouse of a Westport, Connecticut, home for a country weekend in 1948, all but three of them Russian émigrés, with names like Nikolai, Sergei, Igor, and Natasha, and tied to one another by complex strings of artistic and personal relationships, and when Chekhov’s plays are themselves referenced, you’re dancing on very thin ice. For me, the ice cannot withhold the strain, and NIKOLAI AND THE OTHERS eventually goes under.
Dancing (on solid ground) actually happens to be very much on the playwright’s mind, since a central character is the great ballet choreographer George Balanchine (smoothly played by actor-singer Michael Cerveris in a convincing toupee), who is finishing his important ballet ORPHEUS with fellow Soviet exile, modernist composer Igor Stravinsky (John Glover).


Although the playwright’s program note points out that Nelson, for all his extensive research (many of the books he used are listed), plays a bit loosely with some historical data, his Chekhovian dramaturgy focuses entirely on real people, many of them famous artists, including composer Nikolai Nabokov (Stephen Kunken), whose position with the Voice of America places him in a position where he can be a “fixer,” able to help other émigrés with their social or political problems, albeit at a moral price; Sergey Sudeikin (Alvin Epstein), famed scenic designer, the weekend’s frail, 88-year-old (like the actor who plays him) guest of honor because his name day is being celebrated; Vladimir Sokoloff (John Procaccino), classical actor reduced to playing exotic villains whose roles always seem to have him saying, in one accent or another, “I’m going to kill you, mister”; the great ballerina Maria Tallchief (Natalia Alonso), Balanchine’s native American wife, who costars in ORPHEUS with dancer Nicholas Magallanes (Michael Rosen); and Serge Koussevitsky (Dale Place), who will conduct the music for the ballet. And then there are the others, including the many women, such as Vera Stravinsky (Blair Brown), Natasha Nabokov (Kathryn Erbe), Lucia Davidova (Haviland Morris), and Lisa Sokoloff (Betsy Aidem), who serve their lovers and husbands (or ex-husbands) as muses, helpmeets, and confidantes. Aside from the dancers, the only American is the fluent Russian speaker Charles “Chip” Bolen (Gareth Saxe), a “former” State Department official whose presence is highly suspect among these sensitive Russians because of postwar political issues.


This is one of those plays where you think it might be nice to have the actors wear costumes with their numbers and names on them, since it requires your continued focus to figure out who is who, especially among the minor characters. You may feel after some time that you’ve more or less got them all down, only for a new passel of people to arrive and force you to pay attention again to learning their names and relationships. Even at the end of a yawn-filled two and a half hours, there were one or two people I never fully got a handle on; maybe because I was yawning (or dozing) too often.


So—imagine yourself at this lovely estate in 1948, with all these famous artists and intellectuals, one, two, or more of whom you know a lot, a little, or nothing at all—as they eat, drink, cook, move furniture, and flirt while pontificating about the meaning of art and the cultural wars of the period, express concern about their place in the political landscape, talk about their current and former relationships, tell sentimental anecdotes about each other, constantly recall their days in Russia (one scene has each say how old he or she was when they left), and watch as Balanchine demonstrates for them his creative methods as he previews in the barn his soon-to-be triumphant ORPHEUS, based on the Greek myth of the man who attempted to lead his wife out of Hades with the proviso that he not look back; that is something these exiles are, understandably, incapable of doing themselves.


They must somehow seem not only convincing at who they purport to be, but also convincingly Russian. The conceit here is that they are always speaking Russian among themselves, which, given the casting, sounds like very convincing American English. When a foreigner appears in their midst, they quickly resort to speaking with Russian accents and broken English. I guess this is as useful a device as can be expected under the circumstances, but it sure does draw attention to itself and make their Russian-language scenes sound distinctly ersatz.


Director David Cromer does an effective job of maneuvering his eighteen actors around Marsha Ginsburg’s attractive settings, and Ken Billington’s lighting and Jane Greenwood’s costumes make fine visual contributions; however, as is too often the case in curtain-less shows, the appearance of clunky stagehands to move scenery in full view of the audience during scene changes is extremely distracting and a definite mood breaker. Despite the presence of many solid actors, few of them are able to overcome the play’s languorous pace, rambling structure, and general air of artificiality. Too many scenes seem to have been written in consequence of Mr. Nelson’s research; I can imagine him thinking, “Ah, what a wonderful anecdote I’ve found. Where can I stick it in?” When the highlight of a drama about artists is a scene from a famous ballet, even with it being explained by its choreographer to his friends and colleagues, something is probably wrong with the drama.


Last season gave us UNCLE VANYA, IVANOV, VANYA AND SONIA AND MASHA AND SPIKE, and NATASHA, PIERRE AND THE GREAT COMET OF 1812. The new season has just begun and we already have NIKOLAI AND THE OTHERS. Should we be prepared again to shout, “The Russians are coming, the Russians are coming”?
Posted by Samuel L. Leiter at 5:39 PM