16. Review of THESE HALCYON DAYS 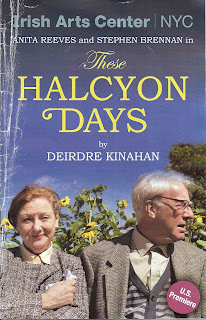 
All the way over on W. 55 Street near 11 Avenue, is an intimate, wood-paneled theatre, with a tiny stage in a place called the Irish Arts Center. It’s a bit of a hike from the 8 Avenue A train, but I’m glad I caught THESE HALCYON DAYS, a gem-like little 75-minute, intermissionless play by Deirdre Kinahan, before its imminent closing. If you remember THE GIN GAME, that marvelously performed work about two elderly folk in a nursing home who strike up an unlikely friendship, which originally starred Hume Cronyn and Jessica Tandy, you’ll have some inkling of the essence of this equally well- acted play starring two veteran actors you’ve probably never heard of, Anita Reeves and Stephen Brennan. I was so surprised by the delicacy, subtlety, authenticity, depth, and honesty of their performances that I couldn’t wait for the play to end just so I could check their bios in the program. It turns out there’s a good reason I didn’t know them, since they’ve spent the greater part of their careers on the Irish stage, in revered theatres like the Gate and the Abbey. Now, here they are in a far-flung corner of Manhattan, in the American premiere of a lovely two-person drama that deserves wider recognition, if only because it offers its venerable actors such exceptional opportunities to play cats cradle with your heartstrings. 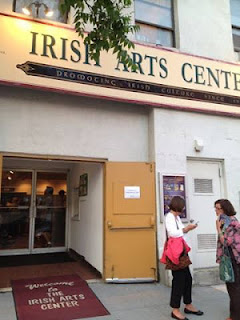 Kinahan’s play is inspired by her memories of a beloved uncle, a poet, who suffered increasing dementia while in a North Dublin nursing home. That uncle was, like the character played by Mr. Brennan, named Sean, but the Sean in the play is a retired actor, while his costar, Ms. Reeves, is Patricia, a former school teacher and principal. He, like the real-life Sean, is losing his memory, and he has resigned himself to whiling away his days until he dies, with nothing to look forward to. His hands shake, he struggles to rise from his chair, he is bent, and he needs a walker. But there is still something alive inside his abandoned body, and it takes another resident, Patricia, who actively resents her condition, to reveal it; she has degenerative cirrhosis of the liver (but denies she's an alcoholic), suffers from severe anxiety, and experiences ever more frequent strokes; she insists that she is there only for a rest before she can go home again. Home is the metaphor that continually surrounds these characters, the nursing home that Patricia refers to as a place of “incarceration,” the one that Sean will never see again, and the one that Patricia’s sister, Nora, may have to sell to pay for Patricia’s nursing home care.


When Patricia meets Stephen and finds out that he was an actor and even appeared in films with stars like Michael Caine (bit parts, he explains), she is excited to discover in this place a man of culture, she having been a teacher of literature and drama. Stephen’s talents are occasionally called on, as when he movingly recites Henry V’s “St. Crispin’s Day” speech, does a dance with Patricia inspired by his performance in THE KING AND I, or bursts into song to the music from the movie LOVE STORY when Patricia plays it on her boom box.


As the play progresses, the shy, dejected Stephen tentatively comes out of his shell under Patricia’s warm and caring guidance, although she, too, gradually reveals the anguish and fear underlying her generally positive disposition. She never married, she confesses, because she never made the time for romance during her career. She rarely is visited by her sister, and Stephen is never visited by his friend, Tom. There is a remarkable scene when, almost in spite of herself, she kisses Stephen passionately, even putting her tongue in his mouth,; he reacts with marked disgust, and she questions his response. One reason he gives is, "You're old!," but soon he reveals that he has no feelings in that way for women, and that since Tom, whom he explains is his lover, no longer will have anything to do with him (after Stephen's  health declined, they found themselves "no longer in sync"), he has all but given up on human relationships. Patricia, though shocked to learn that "you're a gay," quickly takes the news in stride, and the relationship grows into a kind of love until, at the end, with Stephen’s encouragement, Patricia, aware her next stroke will likely kill her, decides she really will go “home.”


The scenery by Maree Kearns, a small, shuttered room with a sun porch extension, is functional, as are the lights by Kevin Smith and sound design by Trevor Knight, but these are fairly secondary in a play brought to shimmering life by director David Horan through dialogue that is funny and moving, and characters that are charming and affectionate company, despite their very real physical and mental issues. One meaning of “halcyon” is golden, happy. In this sense, THESE HALCYON DAYS is a halcyon play.