14. Review of A PUBLIC READING OF AN UNPRODUCED SCREENPLAY ABOUT WALT DISNEY'S DEATH 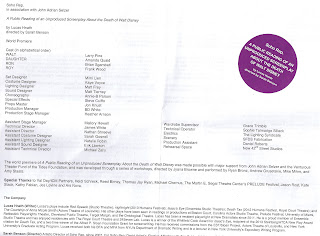 It’s always fascinating to learn the “real” story behind the myths of people we’ve come to consider epitomes of whatever it is that made them famous. Lucas Hnath, who garnered interest last season at the Ensemble Studio Theatre with ISAAC'S EYE, a quirkily novel and often bizarre look at Isaac Newton, likes to toy with the possible reality behind accepted perceptions, even though he has to create his own reality to do so. His Newton, while existing in a world of verifiable fact, was purely a product of the playwright’s imagination, even though most of us today have no idea of what Newton might have really been like or are even likely to care about it. With someone more contemporary, however, someone like Walt Disney, whose presence continues to surround us in movies, TV, and theme park America, we are more likely willing to be voyeurs, especially when we’re exposed to a man who is a complete contradiction to what we always thought of him. This is what makes Hnath’s A PUBLIC READING OF A SCREENPLAY ABOUT THE DEATH OF WALT DISNEY so intriguing. There’s certainly documentation to demonstrate that Walt Disney was a far cry from the images of fun, goodness, and family morality associated with his products, but there’s no reason to believe that the Disney we see in this play, no matter how believably written and performed, is anything like the real man.


Sarah Benson once again displays her directorial chops in making this four character play seem consistently authentic despite the playwright’s difficult stylistic approach. As is so often the case at the Soho Rep, the scenic environment is a surprise and nothing like anything you’ve seen there before. The large rectangular room, sometimes used as is with no scenery to speak of, and with seats dispersed in various configurations, has been converted by set designer Mimi Lien into a corporate boardroom whose walls are covered with dark wood paneling, both in the auditorium and on the stage. Overhead, to complete the sense of place, is a coffered ceiling. We sit on comfortable, cushioned chairs on white risers facing the red carpeted stage, where we see a long, wooden conference table with the actors upstage of it on rolling leather office chairs, facing us as if at a board meeting. A microphone, used only by Disney, is on the desk, with various official odds and ends, including fruits and cheese for snacking.


Before each actor is his script, for this is to be a reading of an autobiographical screenplay about Disney, with him (a marvelous Larry Pine) both reading lines to portray himself and also changing voices instantaneously to speak into the mic as if he were an announcer, reading directorial cues, such as calling for close-ups and cutting from one scene to another. The pretense of reading by Pine and the other actors is gradually abandoned, although now and then resumed, but the behavior of everyone leads you to wonder about their personas. When not reading they are interested and polite listeners, but when reading or saying their lines from memory, they are deeply invested in their characters, yet always with a slight tone of distance. Yet, given that Pine begins the play by referring to himself as Disney, to whom he bears a reasonable resemblance, we are probably meant to assume that the other actors are also the people they enact. Thus the reading of the screenplay uses Pine to play Disney playing Disney; Frank Wood to play Disney’s brother, Roy, playing Roy; Amanda Quaid to play Disney’s unnamed daughter playing that person; and Brian Sgambati to play the daughter’s husband playing himself. The performative nature of the experience, a reading of a screenplay, creates a metatheatrical experience that makes the revelations in the play that much more real while also emphasizing that none of it can be trusted, however much truth may be scattered among the fictions.


To add to the mixture, clearly fantastical elements are included, although even these are tinged with earthy reality. Most noticeably, Disney is presumably dying of something that causes him to cough up blood while nonetheless smoking continuously; to heighten his gradual demise, every now and then, as his coughing worsens, we watch him display blood-soaked handkerchiefs, at one point peeling one from another like a magic trick.


The screenplay itself is largely concerned with Disney’s dream of building an ideal city, which would presumably be Disney World, in Florida, and the conflict he has over its costs with his practically minded, browbeaten, but dependable brother, Roy. He also has fascinating interchanges with his seemingly clueless son-in-law, Ron, who will do anything to be employed by Walt; and his daughter, who refuses to name her son after the father she hates.  There is talk of cryogenic freezing to preserve people forever, and various other topics both authentic and whimsical, although figuring out which is which is not always possible.


Toward the end, as Walt, both the reader of the script and the character he is playing, grows progressively weaker, he continues muttering “cut to” over and over into the mic, and some tedium sets in as we await the final curtain, but all in all this is an offbeat exercise carried out with a polish and expertise that we've come to expect from the Magic Kingdom at Soho Rep.
Posted by Samuel L. Leiter at 7:54 AM