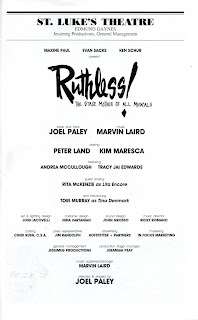 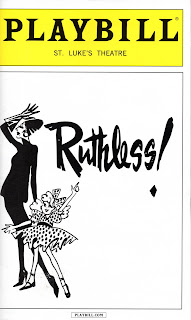 If you’re looking for a brassy, over-the-top, laugh-filled, show biz-spoofing musical that echoes the outrageousness of Charles Busch and the late Charles Ludlam at their campiest, look no further: RUTHLESS: THE MUSICAL (or, to use the program’s subtitle: THE STAGE MOTHER OF ALL MUSICALS) is back. This multi-award winning 1992 Off Broadway hit by Joel Paley (book, lyrics, and direction) and Melvin Laird (music), which has had a surprisingly long life throughout the hinterlands, had a brief run last year at the tiny Triad to raise money for Broadway Cares!/Equity Fights Aid. It’s now ensconced at St. Luke’s Theatre, where, under the direction of its book and lyrics writer, Joel Paley, a gifted gang of droll singers has been given free license to clown and warble each other off the stage. At the company’s heart is Tori Murray, a 10-year-old, talent-packing, gap-toothed, blonde cutie in Shirley Temple curls, playing Tina Denmark. In the original production, Tina, an eight-year-old BAD SEED-inspired show biz aspirant, was enacted by Laura Bell Bundy, who won a Drama Desk Nomination and was understudied by no less than—get this—Natalie Portman and Britney Spears.

The program says the time and place are “Here and Now” but the look is a mix of retro styles with the accent on the retro, as in the 1950s bouffant hairdo (later replaced by a beehive) and flaring, crinoline-supported dress worn by Tina’s Betty Crocker-like mother, Judy Denmark (Kim Maresca, terrific in her Off Broadway debut). Sylvia St. Croix (Peter Land), a flamboyant talent agent played by an actor in drag, wants to make Tina (“I was born to entertain”) a star by encouraging her to try out for Pippi Longstocking, the leading role in her third-grade show, Pippi in Tahiti, directed by the screwy teacher Miss Thorn (Andrea McCullough).

Miss Thorn, however, in thrall to the parents of the oversized, undertalented Louise Lerman (Tracy Jai Edwards), casts her instead, giving Tina the role of Pippi’s dog, Puddles, but also letting her be Louise’s understudy. Incapable of accepting anything but the lead, Tina makes murderous use of Louise’s jump rope to dispose of her rival, and opens in her stead. Arriving to review the show is Judy’s adoptive mother, Lita Encore (Rita McKenzie), an acerbic critic who makes John Simon look like a wimp, and who proudly belts “I Hate Musicals.” Ms. McKenzie, known for her Mermanesque vocal apparatus, unloads show-stopping vitality and vibrato in a number not quite as funny as it deserves to be. (In the current context, you’re free to think GYPSY.)

Judy, convinced that her only talents are domestic, like the many ways she can cook chicken, discovers that her birth mother is the late, great, Broadway star Rita DeMarco, thought to have killed herself, and that she has, indeed, inherited star talent herself. Four years pass, and the complications pile up like cars in a demolition derby: Tina’s incarcerated at the Daisy Clover Institute for Psychopathic Ingénues; Judy blossoms into the two-time Tony-winning diva Ginger DeMarco; Tina arrives from jail (a hilarious sight gag is involved); Ginger’s scheming assistant, Eve Allabout (Ms. Edwards), stirs up trouble (think ALL ABOUT EVE); Tina and her mother engage in a life and death struggle for show biz supremacy; and one deliberately silly surprise revelation and action after the other ensues until only one star is left standing. The lesson: you may be cursed with talent, but if you’re going to survive in this business, you’ve got be what the title says.

Plot-crammed as it is, the show’s actually been streamlined, including the excision of a major character, so that its original two acts now run a snappily-paced 90 minutes. Paley has staged everything to within an inch of its life, with musical underscoring helping accent each move and piece of business. The acting, as in similarly camp-oriented farcical exercises, is decidedly overdone, but tactfully enough to keep it within bounds;  you'll roar at some gags and gag at others. (This one, from Sylvia, scored nicely on the laugh-meter: "One day a producer came aboard and offered me a part in an all-white company of the all-black version of HELLO DOLLY!”) Ms. Maresca is both a comic and musical find, with a big voice and perfect timing. Mr. Land (married, by the way, to famed choreographer Dame Gillian Lynne) is a British-accented New Zealander who uses his tall, slender frame and craggy Johnston Forbes-Robertson features to great advantage in his theatrically flashy portrayal.

Whether or not W.C. Fields actually said, “Never work with animals or children,” those words sure ring true here, since whenever the diminutive Ms. Murray appears she steals the show. Her Tina Denmark not only has a voice that can blister shellac but she also knows how to toss off snarky one-liners with the mature expertise of a practiced vaudevillian.

Josh Iacovelli’s sets (like those often seen at St. Luke’s, which has several shows running in alternation) lean toward the chintzy; what catches the eye are Nina Vartanian’s vivacious costumes. Mr. Paley’s Drama Desk Award-winning lyrics are as amusing as ever, while Laird’s mainly up-tempo music keeps the audience awake as it steamrolls along, demanding big voices that occasionally confuse singing with shouting.

Given the show’s original understudies for Tina’s role, it’s interesting to note the absence of any Tina standbys in this revival. Just kidding of course, but, considering Louise Lerman’s fate in RUTHLESS, it’s fun to contemplate Ms. Murray demanding a clause in her contract prohibiting one.