"Slaving Away on 41st Street" 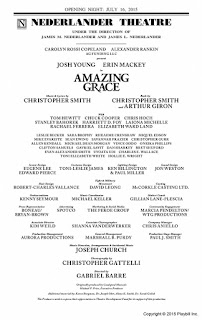 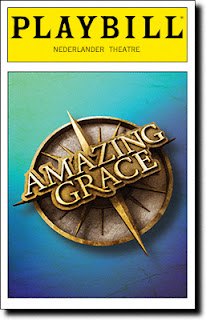 While nowhere near the wretch of a show some of its severest critics would have you believe, AMAZING GRACE, the new musical which comes to the Nederlander after its Chicago premiere, will nonetheless need what its title implies if, once lost, it is ever to be found by Broadway audiences. The show is definitely blessed with a number of virtues that many will find sufficiently entertaining to keep them in their seats for its two and a half hours, including an important historical lesson about England’s fight to abolish slavery in the 18th century, several big-chested songs sung by powerful singers, a remarkable underwater special effect, and, among other things, the beloved eponymous hymn (sung so touchingly recently by President Obama), which closes the show in a heartfelt, full-cast choral blast in which the audience gets to join. 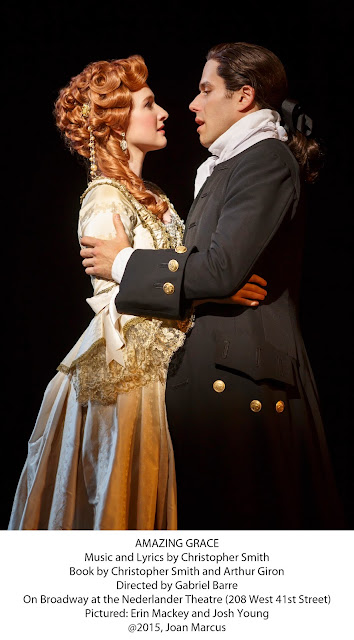 On the other hand, this tale, for all the veracity of its broad outlines, is a fictionalized distortion of what actually happened, its narrative is awkward and clichéd, its characters broad stereotypes, and its wit almost an afterthought. Unlike the 2006 movie of the same title, which followed the activities of abolitionist William Wilberforce, the musical omits that man and focuses on John Newton, former slaver turned abolitionist, who wrote the words to “Amazing Grace,” and who gets only secondary attention (although played by Albert Finney) in the film. 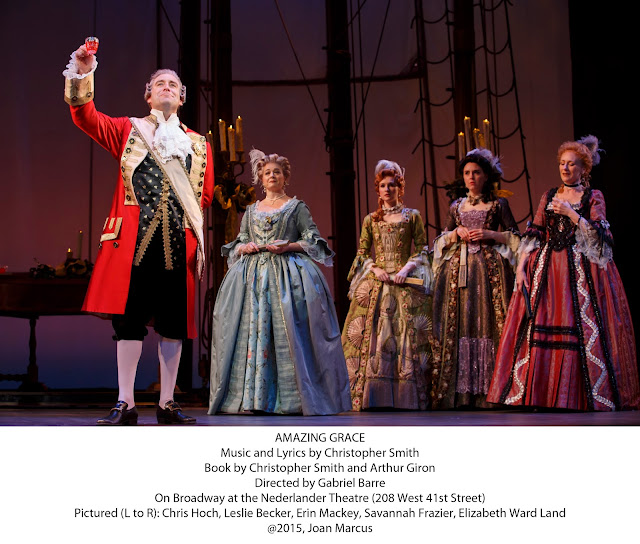 Newton, by the way, didn’t write the music for “Amazing Grace,” which, one could argue, is even more affecting than the words (for nonbelievers, at any rate), and which, following the use of earlier melodies, was attached to the song in 1835. None of this, however, is mentioned in the show, in which the hymn plays no part other than as an emotional coda to events that transpired many years before Newton wrote it; as it is, its direct connection to those events remains blurred. Despite the perils and suffering Newton endured during his slave trading years, and the fascination of his story, his contributions to the abolitionist movement don't seem to have been as significant as this show makes them out to be. 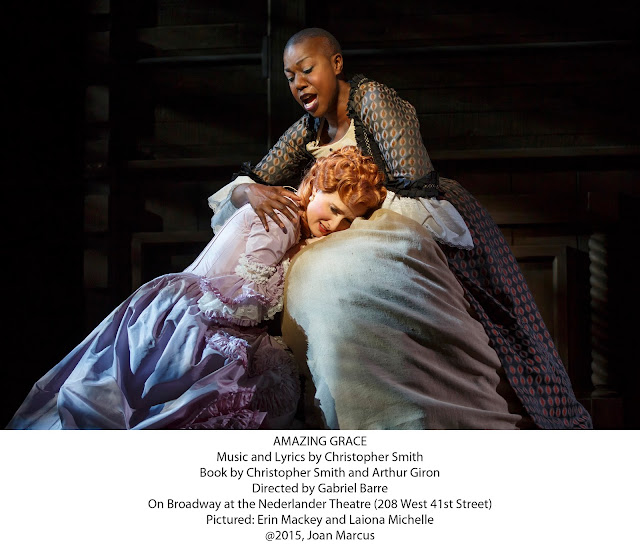 In AMAZING GRACE John Newton (Josh Young) is the handsome, dashing, callous, dissolute, and morally misguided son of a powerful slave trader, Captain Newton (Tom Hewitt); John’s experiences in the trade ultimately lead him to find God and, in time for the final curtain, to finally turn against slavery (which he didn’t actually do until years after the show ends). Unlike another recent musical, HAMILTON, which adheres—despite its hip-hop rhythms—rather faithfully to historical truth, Christopher Smith and Arthur Giron’s book for AMAZING GRACE plays fast and loose with who did what (even creating new characters) by using John’s romantic relationship with Mary Catlett (Erin Mackey), transformed here into a beautiful abolitionist spy admired for her lovely singing, as a central fulcrum; their relationship is complicated by a hackneyed love triangle the third corner of which is represented by the foppish Major Gray (Chris Hoch), whose mannered speech and behavior serve as the show’s chief source of humor. 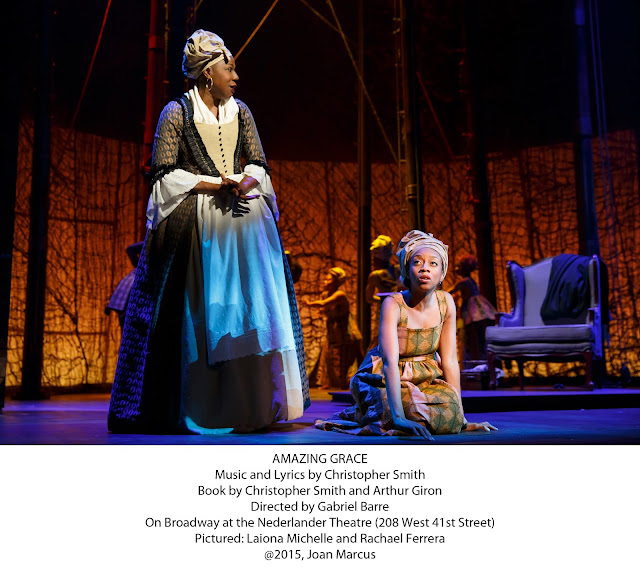 Subplots include Newton’s bond—broken, but eventually resealed in classic melodramatic fashion—with his black manservant, the nobler than noble Thomas a.k.a. Pakuteh (Chuck Cooper); Newton’s business association with a wickedly vampy, campy African monarch, Princess Peyai (Harriet D. Foy), who sells her own people into slavery; and Newton’s difficulties with his domineering father. And, oh yes, there’s the discovery of Yema (Rachael Ferrera), the long-lost child of Nanna (Laiona Michelle), Mary’s black servant, yet more fodder for the melodramatically inclined. 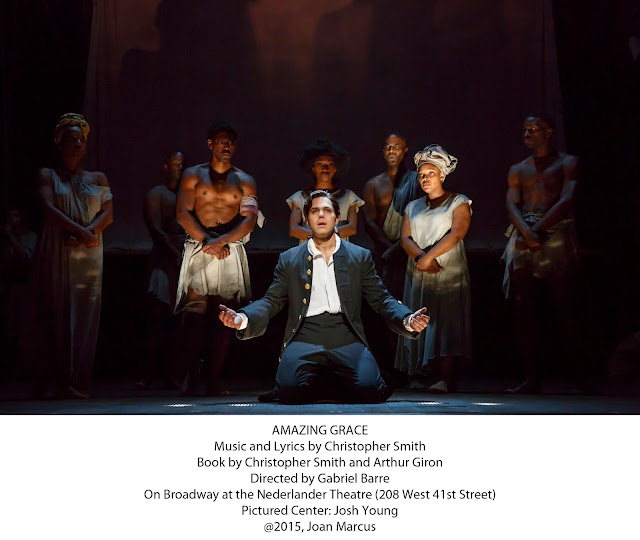 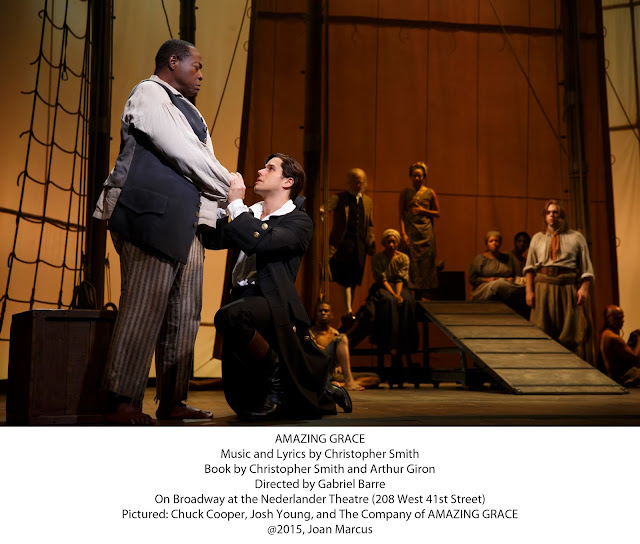 For all their excellent vocal talents (Ms. Mackey was my favorite), the leads—especially Mr. Young—fail to overcome the two-dimensionality of their characters, even the always admirable Chuck Cooper being shackled by the stiffness of the writing. Gabriel Barre’s direction isn’t much help in conjuring believable performances, but he makes the best of the episodic show’s theatrical possibilities, moving the large cast along briskly with the help of Eugene Lee and Edward Pierce’s flexible sets, frequently dominated by an imposing arrangement of ship masts and rigging. Christopher Gattelli is responsible for what choreography there is, although the African dancing in Sierra Leone seems rather kitschy. Toni-Leslie James’s period costumes are suitably attractive, and the extraordinary sound design by Jon Weston makes a smashing impact. 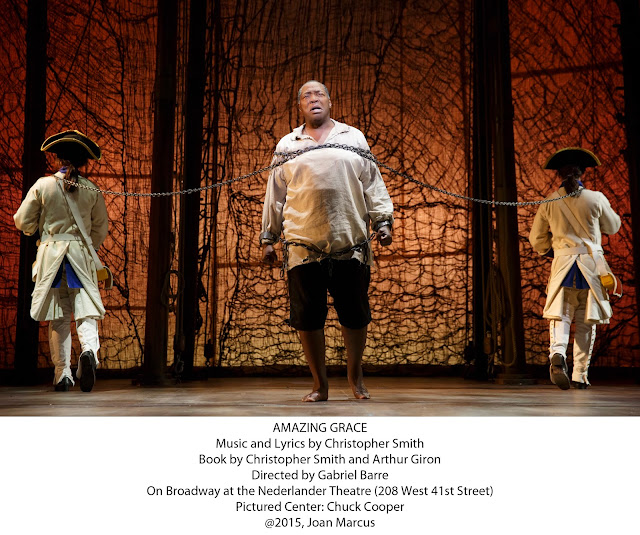 As noted earlier, the show includes a spectacular effect when, after a shipwreck toward the end of act one, the entire stage is brilliantly lit (by Ken Billington and Paul Miller) to represent the ocean’s depths, as John’s body sinks slowly into the brine only for the faithful Thomas to appear from above the proscenium swimming down to rescue his master and end the act. Had the same level of imagination been employed for all other aspects of the show, AMAZING GRACE itself might not be in as much danger of drowning. 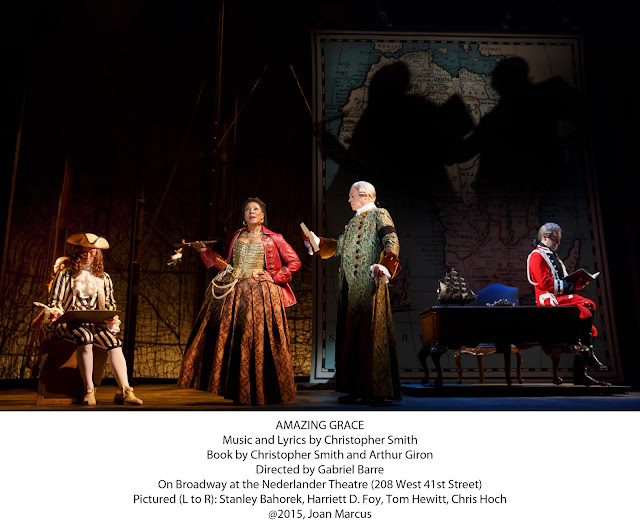