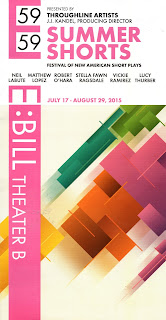 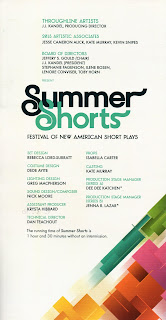 Every summer 59E59 Theaters produces two bills of one-acts, or “short plays” as they’re called here, under the rubric SUMMER SHORTS. One-acts, considered an endangered species--and not to be confused with the increasingly prevalent 90-minute (more or less) one-acts now even invading Broadway--survive mainly because of programs such as this, in which several are bundled into a single presentation. When people speak of them, of course, they’re generally referring to plays of 30 minutes or less; really short short plays are increasingly popular, though; some festivals celebrate 10-minute plays while others actually focus on one-minute dramas. The challenges of compressing narrative developments and character revelation into plays 30 minutes or less are profound and, as in the plays discussed here, the results are usually problematic.
As in the past, this year’s SUMMER SHORTS programs, labeled A and B, are by playwrights with established track records, supplemented by first-rate actors and directors. A neutral set has been designed by Rebecca Lord-Surratt to serve for all three plays, while Dede Ayite has seen to all the costumes, Greg McPherson the lighting, and Nick Moore the music and sound design. The best-known playwright on program A, which lasts an intermissionless 90 minutes, is the prolific Neil LaBute, whose 10K—which he also directed—leads off the evening. Although not particularly meaty, it’s the evening's most substantial work.
10K’s two characters are those ubiquitous constructs we know as the Woman (Clea Alsip) and the Man (J.J. Kandel). The Man and the Woman are joggers, and the “k” in the title refers to kilometers, which the Woman counts instead of miles. Strangers at a suburban park, they meet just as they’re beginning an early morning jog, and agree to run together. As they go, they chat casually, expressing themselves more or less obliquely in Mr. LaBute’s naturalistic dialogue, beneath which flows a stream of hint-dropping subtext. Neither is especially well informed, as they refer ignorantly to how Asian countries control population growth; mention their respective families while implying they’re unhappily married; discuss the wisdom of her having left her two-year-old girl at home alone; and drift into talk of fantasies vis a vis the messiness of reality. Naturally, their small talk inches toward sex and, for all their politesse, there’s a definite aroma of endorphins as the Woman slyly lights the man's emotional Bunsen burner. Nothing untoward happens, but it’s clear that the fantasy of a future encounter has created a chemical reaction.

The press release for 10K suggests that there’s more here than I’ve described, that perhaps these people aren’t meeting for the first time; could this be something the characters do regularly? Still, there’s little reason not to accept the piece at face value as the chance encounter of two unhappily married strangers who enjoy the momentary pleasure of a sexual fantasy that can sustain them when they’ve been jogged back to their personal realities. What makes the play most memorable, however, is that, for perhaps 80% of the time, the two fine actors jog in place, running in a steady rhythm toward the audience, much as Shelden Best did a couple of season’s back in THE LONELINESS OF THE LONG DISTANCE RUNNER. It’s a stunt performance, but both Ms. Alsip and Mr. Kandel carry it off by combining athletic sturdiness with honest and, under the circumstances, surprisingly subtle acting. Nice work.

Up next is Vickie Ramirez’s less substantial GLENBURN 12 WP, directed by Kel Haney and named for a very expensive whiskey that figures in the action. Ms. Ramirez, a Native American playwright, locates us in a small Irish pub on Vanderbilt Avenue opposite Grand Central Station. A young black man, Troy (W. Tre Davis), in backward-facing baseball cap, hoody, and winter jacket, enters to take a break from an apparently race-related protest demonstration at the station (the press release say it’s a “die-in” but the play doesn’t specify this). The joint is empty of both a bartender and customers until Roberta (Tanis Parenteau), an attractive, well-dressed woman in high heels arrives a moment later. She, it turns out, is a Native American attorney. In both cases, appearances can be deceiving.
Troy, sensitive to others’ perceptions of him, is very careful about not doing anything that might be mistaken for an illegal act, while Roberta acts more freely, taking drinks for herself and Troy, although leaving money to pay for them so as to assuage Troy’s fears. Much of their conversation covers racial issues, black and NDN (Indian), but the plot’s engine is driven by a crime, no more about which shall be said here. However, what seems an ordinary, if spiky, conversation between strangers drifts increasingly into improbability, especially once Troy and Roberta begin testing one another with arcane quotes from famous persons, and Troy reveals the unexpected news of what he does for a living. The point of this nicely performed exercise is summed up by Roberta’s parting quote from Native American Sherman Alexie, “Don’t live up to your stereotypes.”
Thinnest of the trio is Matthew Lopez’s sentimental THE SENTINELS, a 9/11-inspired piece about three widows who try to meet annually at a coffee shop near the site of the World Trade Center, where their husbands, all of whom worked for the same company, died that fateful day. Mr. Lopez uses the backward-moving chronology of plays like BETRAYAL, beginning in 2011, with each succeeding scene taking place the year before, thus giving an idea of how the women moved on with their lives after the tragedy. The clock moves backward to 2002, then skips to 2000, when the women are gathered at Windows on the World to celebrate the hiring of one of their husbands.
Director Stephen Brackett has chosen to have projections for each scene indicating which year is involved, but, unlike the script, has detached the words “September 11,” a date that soon becomes evident anyway. Some years go by without anyone showing up (other than the same waitress [Zuzanna Szadkowski]), others are missing at least one person, and others are represented only by one character, Alice (Meg Gibson), wife of the company’s owner, is the oldest of the group; she's determined to continue the tradition of memorializing their late spouses, while Christa (Kellie Overbey) grows increasingly cynical about the whole thing. And since Kelly (Michelle Beck) has remarried, moved to Oregon, and is expecting, the annual meetings appear to have run their course.
While there’s a certain curiosity in such reverse chronology plays as they strip away the layers of time to show how things got to where they are, there are few surprises here, the characters are more shadow than substance, and the play seems to rely mainly on the resonance of 9/11 for its emotional effects. The performances are all suitable, but the play itself never rises much above Ground Zero.

Like Mr. LaBute's 10K, the one-acts on this program are basically running in place.