"She's the Pique of Araby" 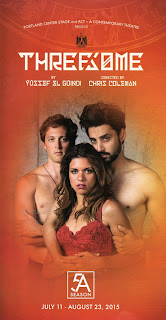 As my guest and I emerged into the summer evening after seeing THREESOME, a two-act dramedy by Yussuf El Guindi at 59E59 Theaters, I was about to say, “That was like two different plays,” when he took the words right out of my mouth. Act one of THREESOME, originally produced at Oregon’s Portland Center Stage, is almost like a sit-com parody of what might happen in the offstage “playroom” of Bruce Norris’s recent THE QUALMS, in which a young couple attempt to work out their personal issues by joining a swingers’ group. Act two, however, is something else entirely.
The first act is set in the bedroom of Rashid (Karan Oberoi) and Leila (Alia Attallah), Egyptian American lovers. Rashid and Leila are sitting in bed, smoking e-cigarettes, casually chatting. We learn that he’s a photographer, that he grew up here while she came later, that she’s written a book whose subject remains an annoying secret to Rashid, and that their relationship is troubled; we also note that they’re getting ready for something with which neither of them feels entirely comfortable. They bicker about gender-related anxieties, including the relative degree of concern men and women have about body issues, Leila dismissing the idea that men can be as obsessed about how they look as women. Then, suddenly, Doug (Quinn Franzen) enters from the bathroom, totally naked (which he remains for much of the act); Leila’s invited him to join her and Rashid in a threesome.
Apart from the initial shock of seeing this sweet-faced young man in the altogether, the play, like THE QUALMS, isn’t really about the display of sexual hijinks; more than titillation, it’s focused both on what in Rashid and Leila’s relationship led them to take this radical step, and what this means on the larger spectrum of male-female, East-West relations. As Doug, Leila, and the resistant Rashid play out their increasingly uncomfortable round robin of will they or won’t they, the mood is that of bedroom comedy (with a sprinkling of farce), exposing not only the principal lovers’ sexual and romantic apprehensions, but those of the amusingly insecure Doug. Laughter is mined from scatology, homophobia, germ phobia, body image, masculinity, and so on. Political issues (including an allusion to the Arab Spring) also poke their noses into the crossfire, to the point that Doug says, “I wasn’t anticipating this. It’s like a seminar. Without clothes on.”
Toward the end of act one, Mr. Guindi contrives a reason to get Doug momentarily offstage so the lovers' conversation can hint at the still undisclosed reason for the diminished passion between Leila and Rashid. We also discover that, to Rashid’s disgust, Doug is the photographer who’s been contracted to do the cover for Leila’s book.
With act two we’re in Doug’s studio, decorated to resemble a harem-like fantasy of Middle Eastern orientalism as a background for Leila’s book cover. Hanging nearby are an abaya and hiqab (a.k.a. hijab), ready to be worn by Leila during the photo shoot; Leila finds Doug’s ideas offensive but he defends them as necessary to sell the book. (This seems a shot at capitalistic merchandising practices and their contribution to international misunderstandings.) Later, you may wonder why she’s even there, since any model in a body and face-concealing abaya and haqib could as easily have fulfilled the task.
Act two is much darker than its predecessor. Leila and Doug discuss men’s anxieties (he’s in therapy) and their need for women to shore up their egos; her contention that the West inadequately depicts Muslim women as helpless, oppressed victims and that Arab women have imaginations and desires, “like everyone else”; the comparative values of fantasy versus reality, and so on. Then Rashid rushes in, drunk; having obtained and read a manuscript of Leila’s book, he’s angry about how thoroughly it depicts a violent experience she had in Egypt. This detonates more discussion, now touching on things like the differences in their respective bravery (he was a “hero” in the Arab spring), why Leila finds Rashid’s solicitousness offensive, how her experience alienated them as lovers, her turning what she went through into a cause, and his disgust with her assessment of “all men from that part of the world.”
After Rashid leaves, Doug returns to photograph Leila in her Arab garb, telling her a long story of something he did while a photographer embedded with American troops in the Middle East. His obliviousness to the offensiveness of his tale is startling, and leads to a striking final image, which, however, like other elements in the play, is somewhat muddled in its implications.
Mr. El Guindi’s dialogue is often interesting, but there’s too much of it, and the second act’s droning tends to drown the drama out. Few have the talent of George Bernard Shaw to make discussion drama continually compelling. Chris Coleman, who directed the Portland production, crisply repeats the assignment here, and each of the actors offers a sharply etched portrayal, Ms. Attallah being especially notable as the feisty, argumentative, intellectually alert Leila. Mr. Oberoi is convincing as the desperate, emotionally and ethically confused Rashid, and Mr. Franzen scores strongly as the sexually apprehensive Doug, who has a tendency to speak before he thinks.