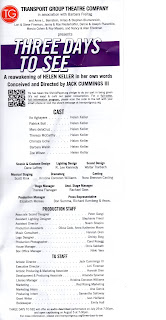 If you were blind and had three days to see, what would you choose to look at? This question was once considered by Helen Keller (1880-1968), the renowned woman who overcame blindness, deafness, and muteness—the results of a childhood illness—to become an internationally famous and beloved writer and speaker. To most people, the story of her first breakthrough into the world of language is best known from William Gibson’s play (and its subsequent film version) THE MIRACLE WORKER, in which Patty Duke and Anne Bancroft embodied Helen and her teacher, Anne Sullivan. Keller’s moving description of what she would see had she the opportunity, published in The Atlantic in 1933, forms part of an intriguing but problematic new work of devised theatre conceived and directed for the Transport Group by the perhaps overly imaginative Jack Cummings III.
Because Gibson’s depiction of that breakthrough into the mind of the violent, practically feral child by the remarkable Sullivan has become so potent an image, we may forget just what an extraordinary woman Helen Keller grew into. She knew five languages (English, Latin, Greek, French, and German, all of which she read in Braille), and was a public intellectual with strong, even provocative, ideas on many subjects, religious, social, political, romantic, literary, and artistic. Mr. Cummings has gleaned many of her writings from different sources, and, in edited form, presented them through a highly theatricalist staging. Unfortunately, none of them is either documented or dated for the audience, although this could easily have been accomplished by using projections. And since the company wishes to save paper, the program is merely a small sheet of paper with no room for explanations or commentary.

Harder to come to terms with, however, is Cummings’s staging. Instead of having a single person represent Keller and speak her words, as in a standard solo show, Mr. Cummings has divided the words up among seven white and nonwhite actors, male and female, and of varying ages, though none of them are senior citizens. (The actors are Ito Aghayere, Patrick Boll, Marc delaCruz, Theresa McCarthy, Chinaza Uche, Barbara Walsh, and Zoe Wilson.) Thus everyone on stage is Helen Keller, sometimes in dizzying succession, sometimes as part of a group talking among itself, and sometimes in dialogue scenes, since many of the selections are written in more than one voice. It’s easy enough to discern when Keller is talking to someone else, but unless one knows in advance that everything spoken was transcribed by Keller herself, it may take some time to comprehend the single voice responsible for it all.
The actors don’t simply speak the words, though, but have been thoroughly choreographed into all sorts of flashy movement patterns (Scott Rink is credited with the “musical staging”), all of it performed on the bare, brick-walled expanse of Theatre 79, which is actually East Fourth Street’s New York Theatre Workshop, temporarily given over to the Transport Group’s production. The scenery, designed by Dane Laffrey, who also chose the casts’ everyday clothing, is little more than several long metal tables and a bunch of plastic chairs. Effective lighting is provided by R. Lee Kennedy.
Mr. Cummings, working with sound designer Walter Trarbach, infuses many familiar American songs into the show’s fabric, usually attempting to highlight its themes in ironic ways. For example, an instrumental of “Bei Mir Bist du Schon” is heard during an epistolary diatribe Keller delivers in 1933 to the German publisher who, because of Nazi policies, told her he had to cut the references to Bolshevism and Lenin from one of her books. I suspect the song, with its Yiddish origins, is supposed to have some connection to the Jews in Nazi Germany, but your guess is as good as mine. Keller's defense of Russian communism, by the way, may surprise you more than her attack on Nazi ideology.
Probably the most extravagant use of music to underscore the material is an extended scene inspired by the famous tooth and nail battle between the young Keller and her teacher (which, in reality, knocked two of the latter’s teeth out) at the Keller family’s dining room table. As the actors take turns donning the blue apron associated with Patty Duke’s performance of the irascible child, and then give their physical and emotional all as Sullivan tries to wrestle Keller into submission, the audience hears a heavily amplified rendition of Benny Goodman’s big band swing classic, “Sing, Sing, Sing.” There are several vivid scenes in the intermissionless, 105-minute production, but this one's pretty much over the top.
Regardless of how theatrically evocative Cummings’s staging is, the question arises as to whether his deconstructive method is doing a service to Keller’s ideas or is using Keller’s ideas to serve the director’s self-interest in showing off his technique. I read the script before seeing the production and—even though I directed a production of THE MIRACLE WORKER myself in 1984—was struck and moved to tears not only by her exquisite, expressive discourse but by how much I’d forgotten of Keller’s intellectual contributions; of her life as a celebrity (she was a vaudeville star and acted in a 1919 silent movie about her life); of her single, unhappily concluded romantic liaison; of her political ideas; of her thoughts on feminism and marriage; of her reaction to reading GONE WITH THE WIND; of her razor-sharp wit; of her human goodness and concern for society’s neglected and downtrodden masses; of her incredible sensitivity to the beauties of art, nature, and music she could neither see nor hear; and to so many other aspects of her awesome experiences. I couldn't help feeling that a versatile actress, only lightly suggesting Keller’s cloudy speech, might very well have made the production far more emotionally and intellectually gripping than it is.

When watching THREE DAYS TO SEE, however, Keller’s existence only fitfully comes to life, mainly in the quieter scenes when a single actor speaks her words without the attention-drawing capers of Mr. Cummings’s theatrics. However much I appreciated his ingenuity, it was too often at the expense of Keller’s contributions, which reached me with far more immediacy on the printed page. More is not necessarily more.

There’s one part of the show that doesn’t derive from Keller’s writings. This is the opening sequence when the company comes downstage, using microphones, to rattle off a string of cruel Helen Keller jokes. This seems an intentionally ironic device to underline how insensitive people are to those with handicaps they deem amusing because of how different they seem. I can still recall seeing Helen Keller in person when she came to speak at my junior high school in Brooklyn, and how, afterward, we kids thought it funny to imitate the oddly obstructed diction of this old woman, who had learned to speak by feeling the vibrations on her teacher’s face. I was 13 or 14, old enough to know better. Yet, surprisingly, a number of adult theatergoers, apparently not aware of the show’s intent, laughed when the actors began their Helen Keller wisecracks. Whether or not they'd learned their lesson by the time the play ended I think this sequence deserves to be gone with the wind.

THREE DAYS TO SEE, despite the drawbacks of its style, has reopened my eyes to its somewhat forgotten subject, who surely deserves a major biopic. Helen Keller, blind, deaf, and dumb, saw and heard more than most sighted and hearing people. I can’t think of a better way to honor her than to reprint these concluding words (as lightly edited by Mr. Cummings) to Helen Keller’s essay on what she’d see if she had three days of sight.

I who am blind can give one hint to those who see. Use your eyes as if tomorrow you would be stricken blind. And the same method can be applied to the other senses.  Hear the music of voices, the song of a bird, the mighty strains of an orchestra, as if you would be stricken deaf tomorrow. Touch each object you want to touch as if tomorrow your tactile sense would fail. Smell the perfume of flowers, taste with relish each morsel, as if tomorrow you could never smell and taste again. Make the most of every sense; glory in all the facets of pleasure and beauty which the world reveals to you.

P.S. Although there is no signer present, the program notes that “an audio described performance” will be offered on July 29 at 7:30 p.m. and “open captioning” will be available on August 5, at 7:30 p.m.