“Len Me Your Ears” 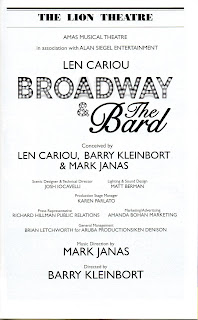 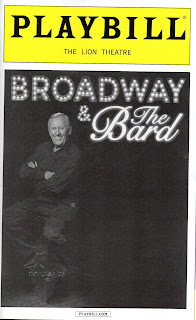 Early in Canadian actor-singer Len Cariou’s glorious stage, film, and TV career, he spent two years carrying spears and understudying at Ontario’s Stratford Shakespeare Festival. When he returned in 1981, he was a star, hired to play the major Shakespearean leads of Prospero, Coriolanus, Brutus, and Petruchio. His many stellar stage performances include not only the classics, of course, but leads in a sizable number of Broadway musicals, including a Tony-winning turn as Sweeney in the original SWEENEY TODD. A glance at the 76-year-old star’s Wikipedia entry reveals how extensive and significant are his contributions to Canadian and American theatre; an opportunity to see a talent of such stature perform his cabaret-like show, BROADWAY & THE BARD, up close and personal in an intimate venue, isn’t to be missed, even if certain allowances have to be made.

The show realizes Mr. Cariou’s long-held dream of creating an evening that combines speeches from Shakespeare with Broadway songs that can somehow be related to the Bard’s words. His Broadway debut, in 1968, was as Orestes in THE HOUSE OF ATREUS, but a year later he returned in the title role of HENRY V. Still, Canadian and American regional theatre audiences are probably more familiar than New Yorkers with his classical acting chops, so the show allows him to demonstrate them along with his once-vaunted singing skills, displayed in such Broadway musicals as APPLAUSE, A LITTLE NIGHT MUSIC, and others, including the one-performance flop DANCE A LITTLE CLOSER.

Conceived by Mr. Cariou, director Barry Kleinbort, and musical director Mark Janas, BROADWAY & THE BARD is tied together with a few unsurprising, practically gossip-free career anecdotes; identification of the titles, shows, and composer/lyricists of his musical numbers; and brief comments contextualizing his 13 spoken selections and 22 songs. (Occasionally, Mr. Janas speaks a line or joins in a lyric.) Like the Shakespeare parts, the songs are often truncated; some speeches earn more than one song, and some songs seem related to both a preceding and following speech. Most speeches have a light piano underscoring, enhancing their dramatic value. Mr. Janas’s tactful accompaniment is light on the touch, supporting the actor’s voice and never, as so often happens, competing with it.
The show is elegantly simple and unfussy: the silver-haired, genial Mr. Cariou, in gray slacks and a silky black shirt with blousy sleeves, moves easily about on Josh Iocavelli’s set: a grand piano, an upstage curtain pulled to one side, strands of hanging theatrical ropes, and a few props—a skull, a sword, a hat, etc. Although none of the latter are used, the star may don a golden laurel wreath or crown. Matt Berman’s superb lighting highlights with great sensitivity the evening’s shifting moods, bringing out all the values in Mr. Cariou’s expressive face.
There are few surprises among the speeches but the songs are all a delight, despite the tenuousness of how well some of them relate to the selections with which they’re paired. Of course, it’s possible to do a show that draws all its songs from musical adaptations of Shakespeare’s plays (or presentations of his life, like the current SOMETHING ROTTEN!), but we get only a sampling of such choices, such as “Falling in Love with Love” from THE BOYS FROM SYRACUSE, and, naturally, “Brush up Your Shakespeare” from KISS ME KATE, which would have led to thrown tomatoes if ignored. Instead, Henry V’s “Once more into the breach,” from HENRY V is paired with “Applause,” from the show of that name, “Down with Love” from HOORAY FOR WHAT! is connected to a speech by Iago from OTHELLO, and CAMELOT’S “How to Handle a Woman” is used to balance the words of Petruchio in THE TAMING OF THE SHREW. The ties are often clever but sometimes arguable.
Mr. Cariou is as good an actor as he’s ever been, providing honest, clearly spoken, insightful readings of his dramatic pieces (which include Sonnet 29, “When in disgrace with fortune and men’s eyes”), but, sadly, his vocal instrument is no longer the rich baritone it once was. While mostly on key, he has trouble with the power notes and frequently sounds strained and reedy. This forces him to act his songs as much as he sings them; happily, in this he never falters, squeezing so many nuances from the lyrics that you willingly forgive what the years have wrought.

Whatever pathos this confluence of age and understanding inspires is exquisitely expressed toward the end when, following Jacques’s “Seven Ages” monologue from AS YOU LIKE IT, he sings Anderson and Weill’s “September Song,” from KNICKERBOCKER HOLIDAY, giving it every drop of tenderness and wisdom it demands. The hour and 20-minute show may conclude on a jauntier note with “Brush up Your Shakespeare,” but it’s the elegiac “September Song” that lingers when the lights finally fade.