If you don’t recognize the title under which this review is being filed it’s because it refers not to a play, revue, or musical but to a museum exhibit located on Fifth Avenue between 37th and 38th Streets, in a building that also contains an exhibition about TV’s “Saturday Night Live.” Despite the proximity of stuff about Dan Ackroyd, John Belushi, and Gilda Radner, though, there’s nothing funny about the King Tut exhibit, unless you consider hilarious an extraordinary display of incredibly authentic-looking artifacts (they’re replicas, not originals) taken from the tomb of King Tutankhamun when it was discovered in the Valley of the Kings in 1923. Or maybe you’re still laughing at Ben Carson’s claim that the pyramids were intended to store grain.
There have been many world tours of both the authentic and the replica artifacts, especially since the 1970s, under oft-shifting titles. I saw one around five years ago at the Discovery Times Square exhibition center and still have in my den a baseball I purchased in the gift shop on which Tutankhamun’s (Tut from here on) face and associated symbols are depicted. Unfortunately, no such souvenir is available in the current gift shop, although there are plenty of other kitschy things to spend your money on.
My own purchase this time was the exhibit’s attractive catalog, which sells for $20. There’s also a nice one for kids priced at $16. The exhibit doesn’t provide a program, and the only takeaway document is a faux-newspaper, “The Tut Times,” available only when you exit, which has some interesting stories about the craze for Egypt and Tut-related material since Tut’s tomb was discovered, including its manifestation in Egyptian-themed American movie palaces. According to "The Tut Times," there was even a pop tune of the day called "King Tut Was a Wise Old Nut." You’ll also learn about the “Downton Abbey” connection, which you may guess at when one of the exhibit’s videos flashes an image of the impressive pile known as Highclere Castle, the residence of the fifth Lord Carnarvon, the wealthy Brit who financed the archaeological explorations that led to Tut’s discovery; Highclere, you see, plays the role of Downton Abbey on the TV series. There are no restrictions against taking your own photos (see those accompanying this report), but the catalog photos and accompanying captions and essays are sure to beat whatever you can capture on your IPhone, even if, like me, you also photograph all the many informative placards.

I visited the exhibit late in the afternoon one recent freezing day and was surprised at how sparsely attended it was. Hopefully, the cold weather was responsible for the turnout because this is a really impressive display, easily accessible on the city’s main shopping street, and spread out over two large floors. Many of the items are shielded behind lucite, but most are fully exposed within touching distance (NOT ADVISED), where you can observe the awesome craftsmanship and artistry with which they were created.
The exhibitors have done a great deal to bring the statues, tombs, weapons, wall paintings, and chariots to life, taking you on a guided tour with a headset and remote whose numbers correspond to those posted at specific places along the route. In addition to the physical objects you get to examine close up, each with its helpful placard, there are videos on continual loops whose narration you can both hear on your headset and read on the subtitles.

Early in the tour you enter a darkened room for the most elaborate of these videos, a documentary in which actors are seen playing the leading figures in the story leading up to the discovery of the pharaoh’s tomb. Chief of these is Howard Carter, whose experiences are deeply fascinating. Photos of the tomb’s discovery taken by Harry Burton are a principal source of interest, and when you exit from the exhibit proper you do so through a room whose walls are covered with many of his images.
THE DISCOVERY OF KING TUT introduces you to the astonishing world of Egypt’s 18th Dynasty, over 3,000 years in the past, its focus being on burial practices, but also what the excavations reveal of their times. Visitors will learn much about ancient Egyptian religion, gods, pharaohs, politics, wealth, and artistry, as well as about modern techniques used in examining and understanding what the excavations reveal. The discovery itself is one of the great modern stories; learning how Carter, after years of trying, finally found the place is stirring, but there are many other things to marvel at, not least of them the difficulties his team had in removing the artifacts from where they’d been sealed off in tiny rooms for so many years. 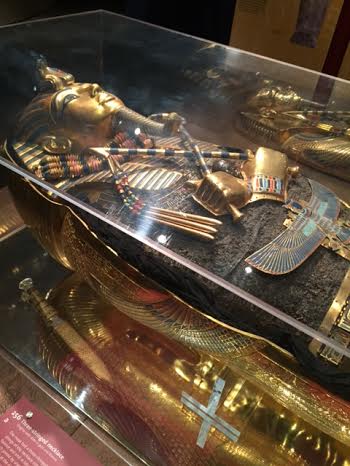 There’s much to contemplate here but you should know there’s no coat check and, despite the occasional presence of benches, you’ll be standing much of the time. I did the full tour in two and a half hours, although it’s possible to stay longer. Nothing on view here was ever intended for anyone to see once the tomb was sealed (although, as you’ll learn, tomb robbers managed to break in and disrupt things early on), so examining these awesome examples from ancient history is a rare privilege. There may not be any pharaonic baseballs on sale, but THE DISCOVERY OF KING TUT nonetheless hits a home run.