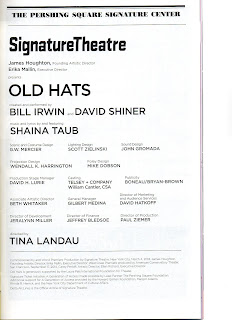 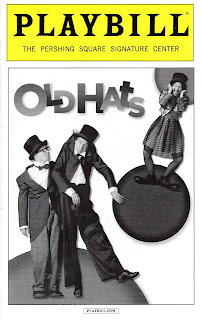 I first saw OLD HATS, with Bill Irwin and David Shiner, at the Signature in 2013. New York should be jumping with joy that they’re back at the same venue, where they once more had me laughing so hard the tears were streaming down my legs. The show they’re giving is essentially the same as the earlier one, although they’ve tweaked some of the material, and the terrific singer/musician Nellie McKay has been replaced by the equally gifted Shaina Taub and her band. The following is an expanded and updated version of the review I posted for the original production.
Bill Irwin and David Shiner are once more the princes of New York clownery with their show, OLD HATS, at the Signature Theatre. As sparklingly directed by Tina Landau, this is one of the most delightful theatre events of the season, as these two veteran funnymen seem ageless in their physical dexterity and comedic spirit. OLD HATS is given in the format of an old-time vaudeville show within a gorgeously red false proscenium designed by G.W. Mercier. A placard stand at stage left announces each act’s title in an attractive digital style, showing that while the show may be old hat in format, it’s new hat in technology. Mr. Irwin even has a memorable scene in which he creates some awesome effects interacting with a tablet. To further this tech-oriented theme, the acts are often backed by marvelous video projections created by Wendall K. Harrington, including one that shows Mr. Irwin’s face blown up to giant size so that when he opens his mouth wide the flesh and blood actor can step into it and then come hurtling out of it a few moments later.
The show is composed of a sequence of comic and musical acts whose quality barely dips, showing the full range of these artists’ mimic, musical, movement, and comedic skills. Their costumes (also designed by Mr. Mercier) are often surrealistically clown-like exaggerations of everyday clothing that allow their limbs the room to create all sorts of limber movements. Their ability to shrink and grow within their clothes gives you the impression that these middle-aged comedians are composed of equal parts flesh, bone, and silly putty.
Except for one classically pathos-ridden scene by Mr. Shiner as a forlorn, lonely hobo (think Emmet Kelly) on a park bench, the actors don’t wear clown makeup. They do sometimes put on funny faces, though, like the wig, glasses, and large nose worn by Mr. Irwin in a scene that does wonders with the contents of a large pot full of stringy spaghetti. In another bit, they wear bright false teeth smiles and slicked down wigs to play rival politicians in a broadly slapstick political debate, with arrows beneath their upstage photos registering their degree of success in winning voter enthusiasm. A number of bits that revolve around the juggling of their oversized top hats reveal the technical perfection of their art.
The humor is mostly in good taste, only occasionally skirting the edges, as when Mr. Shiner and Mr. Irwin play baggy pants commuters on a train platform sharing each other’s pills and reacting accordingly. When Mr. Irwin takes a certain pill from Mr. Shiner, the sudden rise in his pants tells us instantly what it was; Mr. Irwin has the hardest time trying to beat the thing down. In another scene, Mr. Shiner is a pony-tailed, lounge lizard-type magician and Mr. Irwin is his broadly smiling, buxom, blonde female assistant; their slick, dance-like moves are worked out precisely to a Latin rhythm.
This magician routine requires an audience volunteer, and a young woman is brought on stage to be sliced in two. Specific audience members are frequently addressed, especially those in the front row. Mr. Shiner often looks at some old lady and, doing a quick phone gesture, mouths the words “call me.” Four audience members come on stage to participate in a brilliantly comic routine about the making of a silent cowboy movie, with Mr. Shiner as director and cameraman. If you see the show with someone else it’s pretty likely you’ll be talking afterward about whether any of the shanghaied participants was a plant, since everyone seems so believably clumsy and ill at ease. Mr. Shiner’s frustrated reactions to the presumed thick-headedness of his assistants is alone worth the price of admission.
To top it all off, the show is accompanied by a terrific orchestra placed outside the proscenium at stage right, and led by a pianist, accordion player, and singer named Shaina Taub. This young brunette wrote the wonderful jazz-pop songs she sings, always with smartly original lyrics to catch your ear. For instance, her first song, "Might As Well," begins:

Did you know you spend seven years of your life in the bathroom?
And just about a third of your life asleep?
They say you spend nine years combined talking on the phone or waiting in line
So I might as well spend some of the time with you
With you

She capably replaces the marvelous Nellie McKay, who was in the 2013 version of the show but couldn’t return because of other commitments. Ms. Taub ties the whole show together and, near the end, joins her male costars for a bit of tap dancing on stage. My guest couldn't wait to download Ms. Taub's music.
For sheer sustained fun and laughter, there are very few shows that can rival OLD HATS, and very few clowns as multitalented as Mr. Irwin and Mr. Shiner, who dance, sing, play musical instruments, and clown with the nonverbal, physical genius of the great silent movie comics. This is the kind of show you can see over and over and still find that it never becomes old hat.
OTHER VIEWPOINTS:
Show-Score