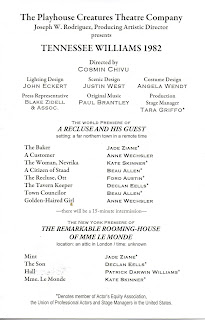 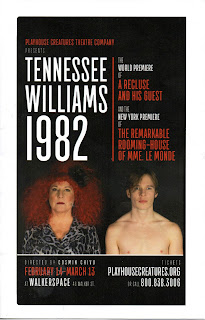 Here's a question: if a great playwright also wrote lousy plays, should those plays be produced or should they be allowed to rest in peace?


Between 1944 and 1961 Tennessee Williams had an unparalleled number of critical and commercial successes that led many to consider him America’s greatest playwright, placing him, in some pundits' eyes, above even Eugene O’Neill and Arthur Miller. These were the years of The Glass Menagerie, A Streetcar Named Desire, Summer and Smoke, The Rose Tattoo, Cat on a Hot Tin Roof, Orpheus Descending, Suddenly Last Summer, Sweet Bird of Youth, and The Night of the Iguana, to name only the most successful.
But the theatre’s times they were a-changing, and Williams found it difficult to change with them. The new guys changing the rules included Pinter, Ionesco, Albee, Beckett, and Orton. Writing was Williams’s oxygen, though; despite numerous critical failures, he kept producing both full-length and short plays, almost to his tragic end in 1983. He mostly abandoned the lyrical realism of his classics in search of a wide variety of experimental modes, such as his masterful rivals often employed. The critical disdain with which many of these later plays were greeted, however, has meant they rarely, if ever, get produced, at least not in New York.

Over the past three years a few Off-Broadway revivals of Williams’s lesser works have been presented, one being a disastrous IN THE BAR OF A TOKYO HOTEL and another an only marginally more watchable THE TWO-CHARACTER PLAY. More interest was generated, however, by Romanian-born director Cimo Chivu’s 2013 staging of 1966’s THE MUTILATED (one of two one-acts originally produced on Broadway as SLAPSTICK TRAGEDY); while the play proved interesting on its own terms, much of the attention it received derived from the casting of Mink Stole, veteran of John Waters’s films, and downtown artist Penny Arcade.
With TENNESSEE WILLIAMS 1982, a two-play program, presented by the Playhouse Creatures Theatre Company, offering the world premiere of “A Recluse and His Guest” and the New York premiere of “The Remarkable Rooming House of Mme. Le Monde,” Mr. Chivu again is advocating for the viability of Williams’s neglected oeuvre. He’s strongly defended the current program’s works, saying: “Both plays have the recurring theme of life in imposed exile and fear of accepting love. And at the bottom of both is a familiar theme from Williams’ work: how a woman survives. Each of the two plays complements the other. They are like windows into Tennessee Williams’ soul.” Which is fine with me, but does it translate into effective theatre?
The acting area for both plays, which faces bleachers on one side and a couple of rows of seats on another, resembles a collection of artfully arranged rubbish, much of it consisting of discarded old TV sets, some practical, allowing grainy images to play across their screens. This generalized concoction of castaway objects—well designed by Justin West and creatively lit by John Eckert—serves as a neutral space in which anything can happen, although it seems more literally appropriate for the attic environment in “The Remarkable Rooming-House of Mme. Le Monde.” Seen in a corner of the set throughout is cellist Paul Brantley, whose original music helps make both plays seem more intriguing than they are.

If you picked up “A Recluse and His Guest,” the opening play, from a stack of anonymous scripts, and began to read it, chances are you’d never guess it was a Williams play, even if you were a Willams maven. It has all the earmarks of a fable, set as it is in an imaginary “far northern” country "in a remote time," where people pay with renzigs, characters say words like “akh,” “kraak,” and “flebst,” favorite foods are chokstrass and trapler, and much ado is made about an animal called a noxwit. The simple plot is about a mysterious, leather-clad, middle-aged woman named Nevrika (Kate Skinner), able to speak to animals and birds, who arrives in the town of Staad after emerging from the woods. She moves in with Ott (Ford Austin), the misanthropic town recluse, serves his every need with patience and love, and even gets him to join the town’s spring revels. The central crisis arises when a letter from another man arrives demanding Nevrika back and Ott must decide what to do.

The storybook-style dialogue has a definite charm and sex plays a role, especially when a drunken town councilor (Beau Allen) insists Nevrika is a whore and forces her to behave accordingly. Still, the only real surprise is that Williams wrote it. Its acting is energetic in a broad, fairytale kind of way, and Ms. Skinner makes a sturdy Nevrika, but the overall impression is of a children’s story with an adult ambience. Take away Williams's name and not much else is left.

Even less impressive, despite flashes of flashy writing, is the grotesquerie called “The Remarkable Rooming-House of Mme. Le Monde.” Whereas “A Recluse and His Guest” avoids any hint of Williams’s famed Southern influence by moving the action to an imaginary European country, this one is set in London, and all the characters are English. It transpires in the attic residence of a weird young gay man named Mint (Jade Ziane), a former public school student whose legs are useless and who moves about by swinging from hooks on the wall.

Mr. Chivu has said he had to overcome various technical obstacles in staging the play. The biggest was clearly that of requiring Mint to propel himself from hook to hook; what the director and his team have done is to hang a series of ropes along a beam so the actor can swing from one to the other and attach himself with a body rigging to whichever he happens to arrive at. It’s probably as suitable an answer as any, short of casting a monkey in the role.
If only Mr. Chivu had been able to solve the problem of making it easier to sit through this odd piece of self-conscious decadence. In addition to Mint, there's Mme. Le Monde’s feral Son (Declan Eells), who uses Mint for brutal anal sex as casually as you might use a pin cushion; Hall (Patrick Darwin Willams), a loudmouthed, garishly dressed, onetime classmate of Mint’s, who expounds about his sexual encounter with a hooker and reads at from a newspaper article about certain disgusting acts of violence involving chickens; and Mme. Le Monde (Ms. Skinner) herself, the garish, cunningly evil landlady and whorehouse proprietor with a red hairdo "like a nuclear explosion" to whom Hall believes he’s made a fortune by selling her shares in a company he represents.
The writing is filled with childish puerilities, as if Williams felt free to finally say things the 1950s would have banned, the characters seem like discarded junk from bad absurdist plays, and the actors are unable to bring the slightest bit of humanity to a fever dream suggesting that Williams was guilty of WUI (writing under the influence).
Tennessee Williams addicts will appreciate the opportunity to see these plays by their beloved idol, and Mr. Chivu is to be commended for making them available in a reasonably effective form. But now that they’ve been exposed, it may be better in the future to put them back in the box and let them R.I.P.