“When an A-List Director Tackles a D-List Play” 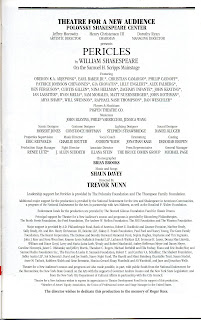 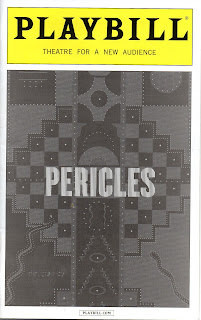 If a team of critics were asked to separate Shakespeare’s plays into graded lists running from A-D (we’ll respect the Bard by avoiding Fs), there’d probably be consensus on the As (HAMLET, OTHELLO, KING LEAR, TWELFTH NIGHT, etc.). Picking the few Ds might be a bit stickier, but it’s likely PERICLES, one of Shakespeare’s early Romances and last plays, which Ben Jonson called “a mouldy tale,” would be one of them. So what happens if you take this rarely produced D-lister and match it with an A-list director, England’s Trevor Nunn, who’s directed not only nearly the complete bardic canon (this is his 35th!) but also the original productions of such commercial musicals as CATS and LES MISÉRABLES?

Mr. Nunn’s PERICLES, his first Shakespeare production for an American company, is now occupying the stage at Theatre for a New Audience’s Polonsky Shakespeare Center in downtown Brooklyn. He’s made the rambling play accessible by taking liberties with Shakespeare’s text; since the first nine scenes are most likely by another author, George Wilkins, purists needn’t get upset. Such freedoms are very welcome in this problematic work. Mr. Nunn also has introduced a substantial amount of tuneful music (composed by Shaun Davey and performed in character by the Pigpen Theatre Co.), but not so much as to make it that much different from many other musically rich Shakespeare productions you may have seen. Only at one point, when Pericles (Christian Camargo, of TV’s “Dexter”), Prince of Tyre, bursts into song after being shown his daughter’s alleged grave, does the music seem intrusive. Otherwise, the play is unreal enough to allow for all sorts of directorial innovation.

PERICLES is a shaggy-dog story stringing numerous incidents together without a subplot. A lot of what happens is fanciful and requires a firm suspension of disbelief. Trouble is you have to remain suspended for nearly three hours before the emotional payoff arrives. Narrating the events, mainly in song, is Gower (Raphael Nash Thompson), a storyteller inspired by John Gower, who wrote the story on which the play is based.
Essentially, there are two parts, separated by 16 years, In the first, we follow the Prince of Tyre (a Lebanese city) on his adventures after he attempts to answer a riddle posed by Antioch’s King Antiochus (Earl Baker, Jr.) that will allow him to marry the king’s daughter (Sam Morales); he infuriates Antiochus, however, by realizing that the riddle means he and his daughter are engaging in incest. What follows includes Pericles' flight from Antiochus’ vengeance, during which he rescues from famine the starving people of Tarsus, ruled by Cleon (Will Swenson) and Dionyza (Nina Hellman). He’s shipwrecked at Pentapolis, where he wins a competition for the hand of the exquisite Princess Thaisa (Gia Crovatin), daughter of the avuncular King Simonides (John Rothman). On his voyage home to the now leaderless Tyre, Thaisa presumably dies during childbirth and is buried at sea in a coffin. It washes up at Ephesus, where a doctor named Cerimon (Mr. Baker, Jr.) revives her. Then Pericles entrusts his baby daughter, Marina, to the leaders of Tarsus on his way home.
Fast forward 16 years and Dionyza seeks to have the beauteous Marina (Lily Englert) slain because she so outshines her own daughter. Before that happens, Marina’s shanghaied by pirates who sell her to brothel owners Bawd (Patrice Johnson Chevannes) and Pander (Oberon K.A. Adjepong) in Mytelene. Then follow the Bawd and Pander’s disappointment when Marina’s virtuousness turns customers chaste; Pericles’ depression (“melancholy”), including the donning of sackcloth when he’s told in Tarsus that Marina died, and his refusal thereafter to wash or cut his hair; the growing bond between Lysimachus (Ian Lassiter), the Governor of Mytelene, and Marina, after he too is converted by her virtue; and the ultimate end of suffering by Marina, Pericles, and—yes—the still living Thaisa, when they’re reunited (like Leontes with his wife and daughter in The Winter’s Tale). As you might expect, the entire company emerges for a festive dance number (choreography by Brian Brooks).
There’s obviously plenty of action—too much, in fact—but Pericles, kind, wise, and brave as he may be, also grows flat, dull, and tiresome. Through much of the play’s latter part he’s silent, depressed, and unkempt, looking like a piece of flotsam from one of his several shipwrecks. Things happen to him more than him making them happen, and his Job-like suffering isn’t connected to any particular religious implications--it just is. Mr. Camargo is a fine, well-spoken actor but his performance, straining to give body to a hollow character, has a stagey, “Shakespearean” air, especially in the final moments when he rages about before reuniting with his loved ones.

PERICLES is performed on Robert Jones’s thrust stage--a black, wood floor at one end of which is a soaring wall reached by five steps fronting a huge orb-like opening that opens and closes to either side to show additional images, including large, undulating waves during the sea scenes. Mr. Nunn’s staging is filled with lovely features, among them the use of billowing sheets and ship’s rigging. If you’ve seen lots of Shakespeare, though, you’ve seen them all before.

Dramatically lit by Stephen Strawbridge, and with many striking costumes—some with a Japanese flavor, others more Middle Eastern—by Constance Hoffman, the production is conventionally attractive; the Middle Eastern feeling dominates what décor there is, with its scattered pillows, rugs, and hanging lamps (for the brothel scene). Much of the music conspires in this atmosphere, sounding like something from a belly dancer's repertoire.

So what happens when an A-list director meets a D-list Shakespeare play? I’d say the answer is a C+.