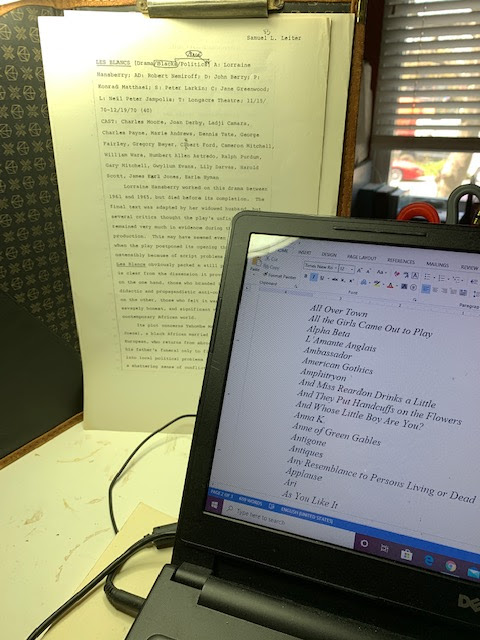 Lorraine Hansberry, the first African-American female playwright to succeed on Broadway when her A Raisin in the Sun premiered in 1959, worked on this drama between 1961 and 1965, dying in the latter year aged only 34. The final text was adapted by her widowed husband, Robert Nemiroff, but several critics thought the play’s unfinished state remained very much in evidence. This may have seemed even more obvious when the play postponed its opening three times, ostensibly because of script problems.

Regardless, Les Blancs packed a still potent punch, as is clear from the dissension it provoked among, on the one hand, those who branded it a work of didactic and propagandistic anti-colonialism, and, on the other, those who felt it was a dynamic, savagely honest, and significant version of the contemporary African world.

Its plot concerns Tshembe Matoseh (James Earl Jones), a black African married to a white European, who returns from England on the occasion of his father’s funeral. He thereby finds himself swept up into local political problems that produce in him a shattering sense of conflicting loyalties to both the black and white worlds that form his background.

Clive Barnes was among those who scored the play for being politically superficial and having pasteboard characters. But Richard Watts thought it a work of “power,” Lee Silver considered it “most absorbing,” and Arthur Sainer believed it to be exciting and thought-provoking. Harold Clurman, rebuking those who felt it necessary to chastise him for favoring a piece of black, anti-white propaganda, said Les Blancs was an “intelligent, compassionate drama,” a “forceful and intelligent statement of the tragic impasse of white and black relations all over the world."

James Earl Jones gave a searing performance as Tshembe, Walter Kerr saying: “This may be the actor’s very best work, which is saying a great deal. Surely it is his subtlest.” Barnes supported this, describing how Jones captured the character’s “pride, his wariness, weariness, ironic detachment, his wit, his final inevitable involvement and ensuing grief. . . . [H]e lived the role, transcending the play.”

The sizable company included several distinguished thespians, including Lili Darvas, Earle Hyman, Cameron Mitchell, and Harold Scott. Jones was given the Drama Desk Award for Outstanding Performance. Lili Darvas –who played Madame Neilsen, a missionary’s wife—was nominated for a Tony as Best Featured Actress in a Play, while Jane Greenwood was nominated for Best Costumes.