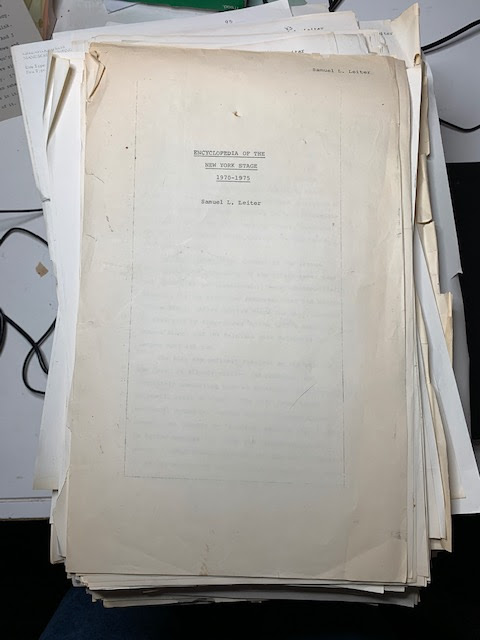 I will try to post at least one entry daily. When time allows, I’ll provide more. The manuscript exists on fading, fragile paper and, because no digital files exist, must be retyped. Hopefully, the tragic health situation we’re all enduring will abate before I get too far into posting these entries but, for the time being, devoted theatre lovers may find reading these materials informative.
ALL GOD’S CHILLUN GOT WINGS [Dramatic Revival] A: Eugene O’Neill; D: George C. Scott; S: Ming Cho Lee; C: Patricia Zipprodt; L: Thomas Skelton; P: Circle in the Square; T: Circle in the Square Joseph E. Levine Theatre; 3/20/75-5/4/75 (53)

In 1924, Eugene O’Neill’s tragic view of a racially mixed marriage (a metaphor for the doomed liaison between his own mother and father—both white, of course—whose names the couple bear—was a work of shocking proportions, especially when its white heroine kissed the hand of its black hero. O’Neill’s treatment of miscegenation had little pertinence remaining, however, other than its historical importance, when given this first New York revival at the city’s leading O’Neill theatre, 51 years later.

The dramatist’s depiction of blacks was awkward and poorly observed, and his characters seemed more like “labels instead of characters,” said Douglas Watt. Watt blamed the play for its “crude outline and clumsy . . . speech,” and Clive Barnes cringed at its datedness, “patronizing” tone, and “bad writing.” Martin Gottfried saw no reason for bringing back this “curiosity,” and John Simon spurned it as “abysmal claptrap.”
Just as bad was the production, with star actor George C. Scott, making his directorial debut, at the helm. “Why must this absorbing actor insist on becoming a dreary director,” queried Simon. Scott’s then wife, Trish Van Devere, in her Broadway debut, was embarrassingly ineffectual as Ella, while Robert Christian’s Jim was merely adequate. (Scott had planned an earlier version, in the late 60s, with James Earl Jones in the lead but it went nowhere.)

David Sheward, in his Scott biography, Rage and Glory, reports that Scott and Devere "brought their offstage conflicts into their professional lives." He quotes Van Devere's understudy, Judith Barcroft:

I thought she was very difficult to direct. He wanted her to use the maternal side of herself. There was a scene where Ella is supposed to hold a straw doll. He wanted her to hold the doll and rock it. But she didn't want to go near it.

They had a tremendous fight just before opening and she left the theatre. So I had to go on. I didn't have any rehearsals and I'd never even been backstage before. The hairdresser led me around. But my husband was a stage manager and he had told me an understudy should always be prepared. I went on and got bravos.

The remainder of the cast, aside from Vickie Thomas as Hattie, the hero’s sister, was even less appreciated than the leads. On the other hand, the lighting was good enough to land Thomas Skelton a Tony nomination.