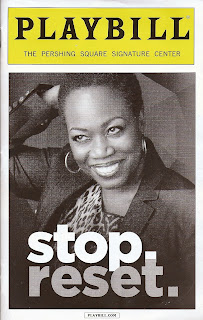 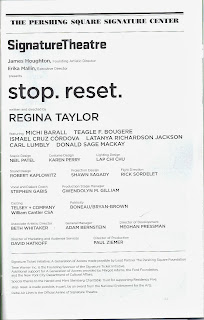 Regina Taylor’s STOP. RESET, at the Signature’s Linney Theatre, which she also directed, is a blah blah yada yada “tone poem on memory and change” based on a potentially promising academic/sci-fi premise. It is produced with elaborate and sophisticated technical expertise but is theatrically flat, vague, and pretentious. 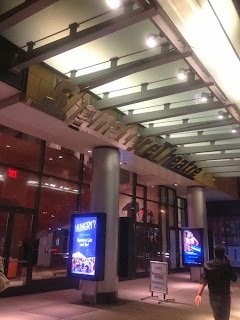 
The play imagines a Chicago publishing house devoted to black literature presided over by the 70-year-old Alexander Ames (Carl Lumbly), the recent victim of a stroke, who grieves over his son, senselessly shot while standing in the street. The effects of his stroke, however, are visible neither in his speech nor in his rather limber movement. Because of the advent of technology and social media, and the consequent decline in book sales, the business is going downhill;  since it is a subsidiary of a much larger corporation, Ames is being forced to cut his already skeletal staff of four down by one. Having built the business from scratch, he is reluctant to downsize further but, forced to do so,  he decides to interview his employees. Each has an interview scene except Jan, a 59-year-old woman who has been with him the longest. The only reason she never has her interview is because she’s been sent out to buy coffee and, with a snowstorm swirling, all the Starbucks stores nearby are closed; when she comes back she’s practically frozen to death. Each of her coworkers, Deb (Michi Barall), an Asian-American woman; Tim (Donald Sage MacKay), a white man; and Chris (Teagle F. Bougere), a black man, is asked during their uncomfortable interviews whom they would fire if it were up to them;, this is a decidedly unprofessional question and one that the workers do their best to navigate. These scenes are the most effective in the play.

Meanwhile, the janitor, J (Ismael Richardson Córdova), a bizarre young man of indeterminate racial makeup, who seems to be an avatar from the future, goes around the office with a squeegee and duster, while stealing computer data on a memory stick and talking to someone we don’t see, the way people do with Bluetooth devices in their ears. He seems engaged in some kind of beyond-digital game, racking up points so he can get to a higher level. He gradually captures the boss’s attention and eventually assumes a position of authority, being hired to move the company into the future by abandoning books as we know them, and going beyond e-books into some ambiguously futuristic experience involving capturing the entirety of a person’s memory (his “soul,” says Ames) and reliving it, or something like that. There's a lot of talk about how, in 100 years time, race and gender issues will be little more than pixilated concerns. As a sort of pseudo-magical realist style invades the premises the script becomes increasingly dense; I found it easy to tune out to J's mumbo jumbo or how Ames, going off into some kind of spiritual transport, was responding to it. 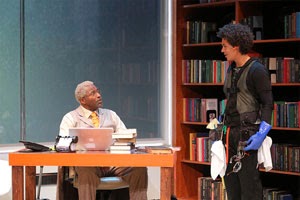 
However talented the actors may be, they all struggle to make their versified language sound believable, and their cardboard characters to seem real, expending a lot of professional energy in getting through an intermissionless hour and 40 minutes of tedious drama. Ms. Taylor demonstrates once again how unwise it can be for a playwright to stage her own material, as she is unable to coax the play to life or to make clear or compelling whatever it has to say about what the onslaught of technology augurs for mankind’s future.


Neil Patel’s attractively sleek, white office, with glass panels used for projections and other technical effects combined with floor to ceiling bookcases—a perfect combination of the new and the outdated—is combined with a marvelous array of verbal and pictorial images—many of African-American faces and writing related to the Civil Rights movement—designed by Shawn Sagady. We don’t go to the theatre to watch sets and video projections, however; their purpose is to support dramatic writing, not to be appreciated on their own.


If there were a way to stop and reset this play, you can bet I would have done it.
Posted by Samuel L. Leiter at 7:24 AM