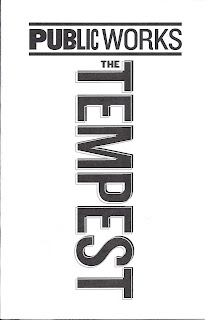 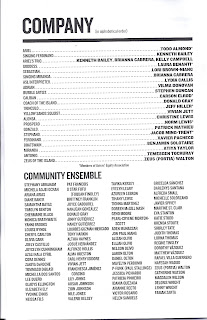 The Public Theatre, founded by Joseph Papp, and now the bailiwick of the redoubtable Oskar Eustis, is making another of its admirable forays into the realm of theatre art and community outreach with a program called Public Works. Its inaugural production, Shakespeare’s THE TEMPEST, is inspired by the gigantic 1916 masque, CALIBAN BY THE YELLOW SANDS, produced by the poet Percy MacKaye and involving thousands of participants in a work based on Shakespeare's play. Having originally produced it in St. Louis, with 7,000 performers, MacKaye wanted to produce it in New York’s Central Park, but the idea ran into opposition and he settled for the now vanished Lewisohn Stadium in Harlem, where, according to THE TEMPEST’s program, 1,500 people (2,000-3,000 says Wikipedia) performed to audiences of 20,000 (15,000 in Wikipedia) each night. MacKaye, son of the extraordinary 19th-century theatrical visionary Steele MacKaye, was a leader in a national movement to produce such community-based pageants. Now, director Lear Debessonet has taken the seed of MacKaye’s idea and given it new life, but, given contemporary financial and other restraints, on a much smaller scale, with a company of 206 actors mingling top-flight professionals with amateurs. In regard to their locale, the three performances given this past weekend at Central Park’s sold-out Delacorte Theatre, although not part of the Shakespeare in the Park series,  succeeded where MacKaye did not.


It isn’t my intention to compare Ms. Debessonet’s accomplishment with MacKaye’s, although it would be interesting if someone did, but to record that seeing even 206 eager performers fill the Delacorte’s stage (and sometimes, auditorium) was both theatrically exciting and emotionally moving, even if the production, which was at least a year in preparation, was not without its imperfections.  I would like to consider this more of a Theatrical Event than an Artistic Production, and, regardless of their relative stage-worthiness, I will not soon forget the thrill of seeing and hearing the multiple community groups that were incorporated as the visual and audible spirits of Prospero’s island.


Although the program says the play was “written by” William Shakespeare, Ms. Debessonet has made so many alterations to the original script that she should, indeed, be credited as its adapter. While some of the Bard’s more famous speeches remain intact, what appear to be a majority of the lines have been modernized for easy understanding, and various other important revisions have been made as well. Sebastian (Lori Brown-Niang) is played by a woman dressed as a man, and Alonso is now a woman, Alonsa (Vivian Jett). Ariel, for one thing, is not the traditional spirit often played by a dancer or slender female; instead, Ariel is in the hands (and voice) of Todd Almond, a playfully fey Justin Timberlake-like singer, dressed in modern-day off-white silk slacks and vest, who serves as a friendly narrator, speaking almost entirely in everyday language, and frequently informing the audience of when he or others are invisible.  Mr. Almond also wrote the show’s music and lyrics, but because the program is vague I don't believe (tell me if I'm wrong) that he's responsible for the numbers performed by the "cameo groups," so called, which incorporate different musical styles. For example, one of the finest moments comes when a group of preadolescent boys and girls in ballet costumes perform delightfully eccentric ballet movements to a routine called "Meshugana Dance," which was choreographed by Eliot Feld for these kids, known as Ballet Tech and hailing from the NYC Public School for Dance; it can be seen on YouTube videos of several years ago.  Some of the songs are performed straight, as when Broadway star Laura Benanti does a solo as a “Goddess” (in a number I didn't particularly care for), but much of it is presented both by choral groups and dancers, such as the hip-hop "Boyz and Girlz," performed by a group called Generation X and choreographed by Kelly Peters (this, too, seems to be a preexisting routine). Generation X, by the way, includes a beanpole dancer whose physical qualities make his robot-like moves magnetically viewable, while casting the blanket of ordinariness over his more familiarly built team.
Matt Saunders's spare and open set combines the platforming and the stage left Cantina remaining from the Delacorte's recent LOVE'S LABOUR'S LOST with a high gallery at stage right, which also seems pulled from stock, while a pinwheel of light at upstage center goes on off in different configurations as the play proceeds. In general, Tyler Micoleau's lighting keeps things bright and visible, with spotlighting for the more intimate moments.

The main characters are played by a racially mixed cast, representing every color in the rainbow, and there is similar diversity among the numerous supernumeraries who represent the island’s elves and spirits, few, if any of whom, ever appear in conventional stagings of THE TEMPEST. The performers range in age from senior citizens to preschoolers.  Here, every hint that permits them to appear brings on a new group of singers or dancers, dressed in costumes credited to Paul Carey and ranging from brilliantly colored cartoon-like versions of modern clothing (replete with oddball hats and sunglasses) to ballet leotards and skintight polos to authentic native dress to Elizabethan-inspired garments (the main characters); I suspect, though, that some of the costumes--like those worn by the Calpulli Mexican Dance Company, probably were in the wardrobes of the performers. (Again, please correct me if I'm wrong.) The production, in fact, is structured like musical theatre rather than straight drama, and the abundance of singing and choreography takes precedence over the story, which becomes a charming excuse for introducing the wild variety of community performers, who sometimes simply come on, do their numbers, and make their exits. Thus the show prides itself on 106 community ensemble members, 32 gospel choir singers, a sign language interpreter, 24 ballet dancers, 3 taxi drivers, 12 Mexican tap dancers, 1 bubble artist, 10 hip hop dancers, 5 Equity actors, 6 taiko drummers, 5 brass band players, a guest star appearance, “and YOU.”


It seems unfair to single out the well-known professionals (Norm Lewis as Prospero, Carson Elrod as Caliban, Jeff Hiller as Trinculo, and Jacob Ming-Trent as Stephano), while not acknowledging every other member of the company, such as the nonprofessional Miranda (Atiya Taylor) and Ferdinand (Xavier Pacheco), and so many others, or not to mention all the “cameo groups” involved (including, in addition to those cited above, the Kaoru Watanabe Taiko Ensemble; the Middle Church Jerriese Johnson Gospel Choir; and the Raya Brass Band). All contribute to the good feeling of sharing in a work of cooperative community creation across professional lines.


Lear Debessonet’s exceptional production of Brecht's THE GOOD PERSON OF SZECHWAN, given at La Mama earlier this year, will soon be revived by the Public Theatre. If you were unable to see her work in THE TEMPEST, a Theatrical Event, you should be making preparations for catching THE GOOD PERSON, an Artistic Production.
Posted by Samuel L. Leiter at 1:36 PM