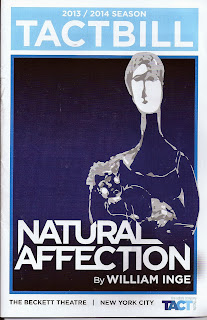 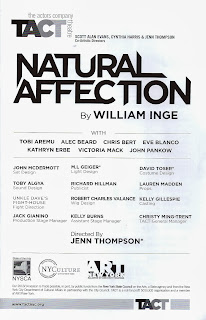 In 1963, leading American playwright William Inge’s NATURAL AFFECTION opened on Broadway with a sterling cast led by Kim Stanley as Sue Barker; Harry Guardino as her lover, Bernie Slovenk; and Tom Bosley as their raucous, alcoholic friend and neighbor, Vince Brinkman. Rising young British director Tony Richardson (recently married to Vanessa Redgrave) staged the play. A newspaper strike reportedly hurt the show’s publicity but the negative critical reaction was probably even more damaging, and the play lasted only 36 performances. Howard Taubman in the New York Times faulted the play for being contrived, lacking plausible characters, and having a hollowness in its central relationship between Sue and her teenage son, Donnie (Gregory Rozakias). One is tempted to imagine that the performances, especially that of the great Ms. Stanley, were at least worth the price of admission, but they, too, met with a negative response.


A decade later an Off Broadway theatre on the 15th floor of a building at W. 46th in the Broadway district gave the play its first New York revival, one of the very few it has received anywhere over the years. Directed by Israel Hicks, it had no major stars (Sandra Seacat played Sue and Nathan George was Bernie) and another Times critic, this one named Howard Thompson,  reviewed it very positively, saying Inge, who had just committed suicide, “would have watched it with quiet satisfaction.” He noted that “A play, which when read seems merely to arrange unappetizing people and clanging sexual frustrations, now comes to life strongly and vividly, perhaps for the first time.” He also observed, in a note redolent of the time, that the role of Sue’s lover was being played by a black actor, which he said “rates, admirably, no elaboration.” (Director Hicks also was black.) Perhaps, at this moment, the play somehow illuminated the hopelessness and despair that had led Inge, an alcoholic and a homosexual in a homophobic world, to take his own life.


NATURAL AFFECTION, in a production directed for TACT by Jenn Thompson at the Beckett Theatre, has returned to New York for its first revival since 1973. (Several reviews, including the one in the New York Post, mistakenly claim the 1963 premiere to have been the play's first and last New York production before this one.) Kathryn Erbe is Sue, Alec Beard is Bernie, John Pankow is Vince, and Chris Bert is Donnie. Apart from Mr. Pankow’s standout performance, the production falters seriously and the play brings to mind Taubman's original critique. The sad thing is that, as Thompson’s review reveals, the play, while seriously problematic, requires someone with the right key to open its lock.


Inge, previously preoccupied with small-town Midwestern life in 1950S classics like PICNIC, BUS STOP, COME BACK LITTLE SHEBA, and THE DARK AT THE TOP OF THE STAIRS, turned to the Chicago urban scene for NATURAL AFFECTION, being especially concerned with the rash of violence in the news that made city life at the time so disturbing. His play seeks to root out the source of such acts by depicting a domestic situation that reflects the changes being experienced in contemporary social relations. The heroine, Sue, is on the cusp of these changes, being a successful department store buyer who had placed her baby boy in an orphanage (the father, a bellhop, had run off) only for him to grow up as a troublemaker and be sent to reform school (a.k.a. "work farm") for stealing a car and assaulting a woman.

Sue, unusual for the time, lives openly with Bernie, a younger man who has trouble earning a decent living. A male chauvinist, he refuses to marry Sue because he’s embarrassed by the inequality between them. Sue, in fact, pays the rent on the handsome apartment they share; he also happens to be carrying on with Vince’s floozy wife, Claire (Victoria Mack). When Sue’s son, Donnie, is allowed home on leave, with the possibility of not having to return if his mother takes him in for the year that would end his incarceration, a dangerous triangle emerges; at the points are the resentful, pitiless Bernie; the unstable, troubled Donnie; and the confused Sue, who tries to make up for her years of neglectful motherhood by smothering her son with “natural affection”; her behavior eventuates in Donnie’s putting an incestuous move on her.

Further drama is injected into this troubled little world by Vince, who makes good money but is in trouble over his taxes. Vince, who knows full well Claire’s relationship with Bernie, also is burdened by repressed homosexual longings, hinted at in the second act when, smashed to the gills, he carries on outrageously as he and his wife prepare to go out to the Playboy Club on Christmas Eve with Bernie and Sue. As the tensions surrounding him gradually increase, Donnie loses control in a sudden act of extreme violence.


All this sexual, alcoholic, and incestuous carrying on clearly brings to mind the work of Inge’s friend, Tennessee Williams, whose SWEET BIRD OF YOUTH is alluded to satirically; Vince refers several times to Chance Wayne’s castration by recalling how they “cut off his paraphernalia.” But Inge’s writing here is coarser and less poetic than that in Williams’s plays, too much of the plotting is contrived and melodramatic (especially toward the end), the dialogue is often clichéd (Sue to her juvenile delinquent son: “Now run along like a good boy”), and the subtextual acting required to cover up the dialogue's artificiality is sorely lacking.


The actors, most noticeably the usually reliable Ms. Erbe, play only the surface of their roles, making it hard to accept the motives driving their behavior. Director Jenn Thompson, as my theatre companion, an experienced theatre director noted, fails to get the company to focus on the reality of their conflicts, and, with everything seeming rushed, doesn’t create textured performances with effective pacing and nuance. Mr. Pankow, so good as the loudmouthed TV producer on HBO’s “Episodes,” plays a not dissimilar but far more varied role here; he has little to do in act one, but in his big second act scene he manages to go way overboard playing the boorish, drunken clown yet never loses his sense of truth; when he calms down and has an intimate scene with Bernie, sitting on the edge of a bed, his disgust with his life is palpable; with his line, “It’s awful hard for two men to show that they like each other,” we feel his quiet desperation.


Design-wise, we are once again in a typical stage apartment, this one created by John McDermott, abetted by the wide space of the Beckett stage, which allows for a bedroom at stage right, a living room with upstage kitchen at center, and a hallway at left showing the entrance to the Brinkmans’ apartment. The set has an unconvincing cheapness, most obvious in the thin, wooden door of Sue and Bernie’s apartment, and the not very well painted stripes on the hallway wallpaper. Original music, used in the 1963 production (and considered one of the show’s few highlights), is eschewed in favor of moody jazz recordings; Toby Algya’s sound design includes some recognizable pop tunes played at extreme volume levels by teenage Donnie on the record player, including James Brown’s “I Feel Good,” although I wonder if that's what this particular white boy would have been listening to in the early 1960s. David Toser’s costumes, in the “Mad Men” vein, are unexceptional, and some of Donnie’s clothes are questionable for a kid of his age; I was there, so I know. And, unless it can be argued that Sue is an orthodox Jew, wig designer Robert Charles Valance should have to wear Ms. Erbe's sheitl himself when she's not using it.


I wish I had a more affectionate response to this revival. I can understand how the play stumbled in its first production. But I wish I knew a bit more about just what Thompson saw that made that 1973 version work.
Posted by Samuel L. Leiter at 9:41 PM