91. THE LIFE AND SORT OF DEATH OF ERIC ARGYLE 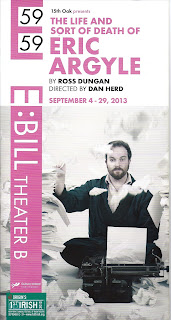 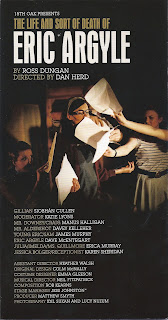 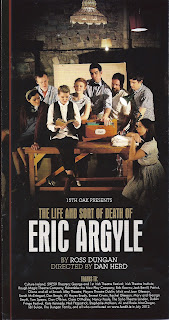 In OUR TOWN, Emily, who has died, is granted the chance to come back to earth to view herself and her family on a day of her choosing. In Ross Dungan’s THE LIFE AND SORT OF SORT OF DEATH OF ERIC ARGYLE, now playing at 59E59 as part of Origin’s 1st Irish Theatre Festival, New York’s annual festival of Irish theatre, 58-year-old Eric Argyle (Dave McEntegart), killed when hit by a car, is given the chance to view several major incidents in his life. The point seems to be not, as in OUR TOWN, to make us realize how much we must pay attention to and appreciate every moment we’re alive, but to show us that every life, no matter how mundane, counts for something. Perhaps the title should have been IT’S A WONDERFUL LIFE AND SORT OF DEATH OF ERIC ARGYLE. The theme, however, remains more elusive than in Frank Capra's movie classic.


To fulfill this notion, director Dan Herd and his cast of 8 talented young Irish actors (of the 15th Oak company) have created an ensemble piece that, based on Dungan’s program notes, appears to be the result of a year's collaboration with the writer and a design and musical team. They started with practically no resources and gradually developed the present work until it reached the Edinburgh Festival before moving to a run in London’s Soho district and then New York. It has many elements often encountered at devised theatre pieces, such as a very low-budget set (by Colm McNally) with minimal scenic pieces that can be converted to multiple uses; lighting that comes from found sources (such as the array of illuminated old lamp shades hanging overhead); costuming that allows for actors to play more than one character with the simplest of changes; and among other conventions, the use of a narrator or storyteller.


Eric Argyle’s sad life of loss and missed opportunities is narrated by various actors who read from dog-eared paperbacks, as if this is a piece of pre-existing literature being expressed both through direct narration and acted scenes. The action begins at 1:01 a.m. when a cellist, Jessica Bolger (Karen Sheridan), is woken up by the postman delivering 5,307 letters from a stranger, Eric Argyle. At that very moment, Eric’s uncle, Mr. Aldershot (Davey Kelleher), and Eric’s former shopkeeper boss, Mr. Downey (Manus Halligan), are waiting for others to arrive (they never do) for Eric’s funeral, while several minutes later, the late Eric Argyle, in his pajamas and robe, is ushered into a room where he is to be interrogated by a "moderator" (Katie Lyons), while watching scenes from his life. Soon we are enmeshed in a shaggy dog story that includes highlights from Eric’s often unhappy life (Young Eric is played by James Murphy). These begin with his preadolescent speech problems, which are treated by  his uncle, the overbearing Mr. Aldershot, a speech therapist. Soon Eric is reviewing his involvement in a teenage schoolboy prank that leads, ironically, to his finding a place for himself in the heart of Mr. Downey, who recently lost his own son; his friendship with Craig (Manus Halligan, again), who marries the pretty Gillian (Siobhán Cullen); his ambivalent relationship with Gillian, on whose affection he fails to capitalize after Craig passes on (people are always dying in the play); and, among other things, the odd coincidences that emerge from Jessica’s perusal of the 5,307 letters meant not for her but for Gillian, and that, when properly organized, comprise a book of Eric’s life.


Eric is led to believe that his interrogation will lead to a decision by the people questioning him, but he can never fully discover what is being decided, if anything; apart from a few clues, the audience also remains mostly the dark. During the trial-like questioning, the audience is addressed as if it will have some decision-making function, which never happens, and when questions from the audience (which is assumed to be made up of dead people) are asked for, the questions come from actors on the stage. As the clock ticks down (as noted in the dialogue) to the early morning hour when the interrogation is to be completed, the play’s multiple threads come together in a harmonious fashion. Eric’s interrogation over, we are told by the narration of his fading from consciousness, never to know the touching occurrences we are informed will soon transpire among the living because of him. But then again, that's life, isn't it? (Better yet, that's death.)


Throughout most of the performance lovely guitar music by Rob Kearns is strummed in the background by the actors, adding considerably to the whimsically elegiac mood. There is a poetic lilt to Dungan’s prose, especially as spoken with the richly musical Irish accents of these actors, and much of it is pleasant to listen to. But the play is performed from the start at too rapid a clip, and the staging and performances, which use only subtle hints to differentiate among characters, make it hard to figure out at first what is happening and who the characters are. Since all the actors are young (they all look like to be in their 20s), and the merest physical changes are used to suggest age, the characterizations rarely come to life as recognizable and believable individuals. I found myself going into and out of the play, focusing on some scenes and losing focus on the others.

There is an excessive reliance on narrative storytelling rather than dramatized action; much more happens in the literary narrative’s exposition than in the acted scenes themselves. Dungan definitely has a gift for language, and he infuses his writing with twee conceits, charming comments, humorous remarks, and sweet sentimentality, but the production remains too intent on moving things along, with the dialogue spoken at a trot, to allow healthy digestion of all the narrative information we are fed.

I sort of enjoyed THE LIFE AND SORT OF DEATH OF ERIC ARGYLE, but then again I sort of didn't.
Posted by Samuel L. Leiter at 7:25 AM