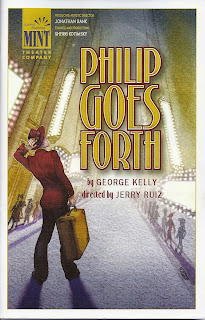 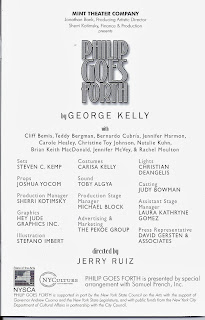 During the 1920s George Kelly was one of America’s most promising playwrights, his first three Broadway plays being THE TORCHBEARERS (1923), THE SHOW-OFF (1924), and the Pulitzer Prize-winning CRAIG’S WIFE, each of them made into movies (including remakes); these plays, especially the first two, continue to be revived. Subsequently, Kelly (uncle of movie star Grace Kelly) found it hard to sustain this level of success, and, after a rather unfair appraisal of PHILIP GOES FORTH (1931) from New York Times critic Brooks Atkinson, he didn’t write another Broadway play until 1936, and after that not until the mid-1940s; none of his later plays were hits. He often wrote about the theatre and about self-centered people who need to learn the truth about their deficiencies. Now, the Mint Theatre, which stakes its reputation on the revival of forgotten plays, has attempted to breathe new life into PHILIP GOES FORTH, but the production fails to do much more than locate an erratic pulse. There’s still life in the old play, but, a few moments aside, it would require a larger shot of artistic adrenaline than is injected here to make it stand up and dance. 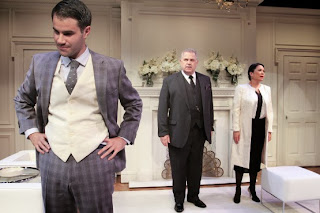 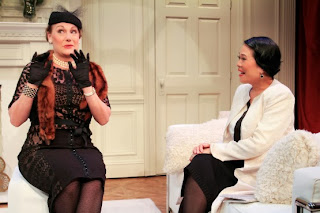 Carole Healey (left) and Christine Toy Johnson. Photo: Rahav Segev.
When originally produced, it was deemed a didactic satirical comedy. Commonweal critic Richard Dana Skinner called “a happy if uninspired comment on that youthful egotism which expresses itself in a desire to run away from practical affairs and ‘do something significant.’” The youth alluded to is Philip Eldridge (Bernardo Cubria), 23-year-old son of the millionaire businessman Mr. Eldridge (Cliff Bemis), who lives in an unspecified city 500 miles from New York. Philip works for his dad, and shows every sign of being as able a businessman as he, but son and father clash when Philip, influenced by the advice of friends, decides he wants to go to New York and become a playwright. The time is early in the Depression (the play has a single reference to “the Crash”), when people are happy to have a job, any job, but Philip is willing to chuck it all rather than finding time to write during his free time from his cushy position. His worried but maternally compassionate Aunt Marian (Christine Toy Johnson) supports him (there is no mention of his mother), and he also receives grudging approval from the flamboyant matron Mrs. Oliver (Carole Healey), who once wrote a play herself, and much stronger backing from her daughter, Cynthia (Natalie Kuhn); Cynthia loves him and naively believes, without ever having seen a word he’s written, that he must be a wonderful writer.


He cuts his ties to his unhappy father and moves to New York where the residents at his boarding house include a depressed pianist-composer, Haines (Brian Keith MacDonald); a pretty, eccentric young poetess, Miss Krail (Rachel Mouton); and his offbeat, insincere old college friend, Mr. Shronk (Teddy Bergman), who has a hand in Philip’s writing. The landlady, Miss Ferris (Kathryn Kates), was once one of America’s leading stage stars. Philip, who has true business ability, is succeeding very well at a job not unlike the one he had with his father, and also has managed to write a play, although we learn from Mrs. Ferris that he hasn’t been at his typewriter for some time. She takes a close interest in her residents and, with brutal honesty, ultimately lets Philip know how talentless he is. His aunt, Mrs. Oliver, and Cynthia show up at the boarding house, followed by Mr. Eldridge; can reconciliation be far behind?


Philip says at one point that his plays will be about life and avoid typical happy endings; in the sense that he fails at his goal PHILIP GOES FORTH’s ending could be considered unhappy. But Philip’s dilettantism and immaturity is so clear from the start that—barring a specifically satirical purpose—it would have defied belief to have him succeed as a dramatist. So the ending is, indeed, conventionally happy and sentimental, especially when Philip’s father, so resistant to his son’s becoming a playwright, makes one of those close-to-the curtain revelations designed to make you feel warm and cozy about the gruffer examples human nature.


The play is not especially dated, and its characters and situations remain generally plausible, if stereotypical, with much of the dialogue smart and listenable. The Mint’s production manages to maintain an audience’s interest through some decent performances, appropriate pacing, and fluid movement, but the effort falls short of artistic success. Only two performances exceed the familiar stock company level so common at Off Broadway revival houses—Natalie Kuhn as the sweet and optimistic Cynthia, who makes you sympathize with the disappointment she will feel when she eventually discovers Philip’s literary ineptitude, and Cliff Bemis, whose convincing ease and honesty as Mr. Eldridge avoids making him a pompously unappealing patriarch.


Kathryn Kates (replacing Jennifer Harmon shortly before the show opened) as the former Broadway star, Mrs. Ferris, has a cynical, Thelma Ritter-like earthiness that seems out of character for a former stage star, who should be grander and more theatrical. Carole Healey’s wealthy socialite, Mrs. Oliver, brings colorful vivacity to her scenes, but her British accent is too stagey and reminiscent of those used by moneyed matrons in early 30s movies. Teddy Bergman as Mr. Shronk offers an oddball performance without any lifelike qualities, and Bernardo Cubria makes Philip a petulant, charmless, spoiled brat. While director Jerry Ruiz’s staging is generally effective, he needs to have worked more closely with his actors to shave off their artificial edges and reach more deeply into their hearts.


Steven C. Kemp has designed two substantial sets for the Mint’s tiny stage, which often surprises with how far it can go under such limited circumstances. His first act set of an all white formal living room is eye-catching, but the obtrusively bright green room he conjures for the boarding house parlor is both garish and unconvincing. Carisa Kelly’s costumes aren’t able to overcome budgetary obstacles; too many have a make-do lack of authenticity. Christian DeAngelis’s lighting is effective, especially the gobos he uses in act one to suggest sunlight hitting the rear wall through unseen arched windows.


Despite these drawbacks in the Mint’s realization, the play displays a stage worthiness that should tempt other companies looking to revive little-known plays by once important dramatists. (Another example on the horizon is William Inge’s NATURAL AFFECTION, which I’m seeing Saturday. ) You’ll need to go forth to PHILIP GOES FORTH, though, to see if you agree.
Posted by Samuel L. Leiter at 9:17 AM