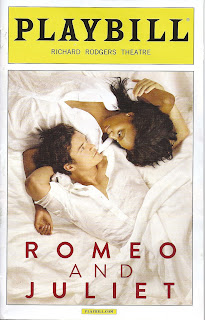 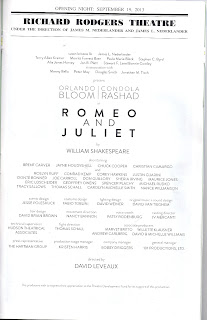 In the spring of 1959, when I was a theatre major in my freshman year at Brooklyn College, I desperately wanted to be cast as Romeo in the upcoming department production of ROMEO AND JULIET, and I practiced for weeks to prepare for the auditions. No luck, but I did get cast in the tiny part of Balthasar, Romeo’s “man.” Every time I’ve seen a production of the play since then, I’ve waited for Balthasar to speak his few lines to see how I should have handled them in my own fledgling performance. For the record, then, let it be said that Joe Carroll, who plays Balthasar in the current revival of ROMEO AND JULIET at the Richard Rodgers Theatre, is just fine and I learned something for the next time I play the role. Oh, yes, the production also stars Orlando Bloom (of movie fame) and Condola Rashad (recently so good in THE TRIP TO BOUNTIFUL) as the star-crossed lovers, in this first entry of what promises to be a rather abundant season of Shakespeare productions, on and Off Broadway.


David Leveaux’s modern-dress staging pictures the Capulet family as black and the Montagues as white, but nothing in the direction suggests that the enmity between the two families is specifically racial. Lord Capulet (the always remarkable Chuck Cooper), when needled at the masked ball by Tybalt about Romeo’s unwanted presence there, tries to calm the black Tybalt down by speaking favorably of the white Romeo, just as he does in most productions where color is not an issue. Tybalt’s attitude toward Romeo is nasty in the original, and remains so here without any additional emphasis on racial hatred, so the conflict between the Montagues and Capulets remains a given, lacking clearly defined motivation, just as it does in Shakespeare. All we need to know is that the two families dislike each other, and the color separation simply clarifies who is on which side, although Juliet’s nurse is played by a white actress, Jayne Houdyshell; perhaps this is intended as a touch of irony by having a white person cast as a servant in a black household.

A side note: the production is being advertised as the first  Broadway revival of ROMEO AND JULIET in 37 years, since one starring the late Paul Rudd (not today's actor of that name) and Pamela Payton-Wright at the Circle in the Square in 1977. But I just happened to note in the program for Regina Taylor's STOP. RESET at the Signature Theatre that her bio claims not only that she was in a ROMEO AND JULIET at Broadway's Belasco Theatre in 1988, but that she was Broadway's first black Juliet. Further research disclosed that there was indeed a production of the play at the Belasco in 1988, along with two other Shakespeare plays, but that they were not counted as part of the season and were part of a Public Theatre program for New York City schools. So technically, one could argue that Ms. Taylor is correct, and one could argue that the current production's claim about how long it's been since ROMEO AND JULIET has been seen on Broadway is correct; at the same time, one could argue the opposite for both claims. 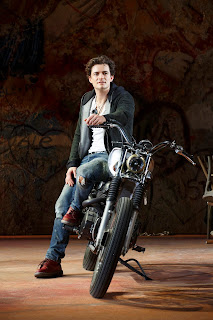 
The play begins with a loud bang, followed by a metal bar along the front of the stage bursting into flames and a white dove flying in and landing on a large metal bell. At this moment, the actor playing Friar Laurence (Brent Carver) enters to speak the prologue. Then, following a street fight that breaks out with knives and chains between the Capulet and Montague servants, Romeo enters on a revved up motorcycle. Fabio Toblini has created a look for the young men suggesting a cross between WEST SIDE STORY and British rock, with skimpy jackets, T-shirts, and skinny jeans. Christian Carmago’s Mercutio resembles a young Keith Richards in his tight leather jacket, bushy hair, and bony movements, and Orlando Bloom wears an abbreviated motorcycle jacket/sweater with zippers and a hoody, a white, body-hugging polo, ripped jeans, and red leather shoes. Not all the costumes fit this look, of course, and Juliet wears dresses and shifts, while her mother, played by the very buff Roslyn Ruff, her hair clipped close to the head, wears an armless, formfitting, floor-length maroon dress, with a gold band around one of her well-toned biceps. One of the more questionable costumes is that of Friar Laurence, whose traditional cassock is here replaced by a pale blue hoody. 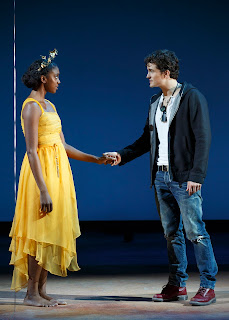 
The rapidly paced action is played against Jesse Poleshuck’s set design, essentially consisting of a thick rear wall, placed in front of the cyclorama, painted with a fuzzy Renaissance-style mural of several haloed saints on which graffiti has been sprayed; it separates into multiple sections to form new arrangements that allow for speedy shifts from scene to scene. The wall also has rungs that actors can climb up and down on. The church bell noted earlier hangs at stage left throughout. An assortment of gray wooden chairs serves for whatever furniture is needed. When Juliet’s balcony is needed, an odd, Japanese bridge-like contraption, which seems strangely out of place, flies on at left, suspended in midair and presumably leading to Juliet’s room somewhere in the wings. David Weiner’s lighting design, abetted for some reason by bars of metal with gas jets that flame up on cue, adds color and romance when needed.


The actors playing the teenaged lovers and their friends are all far older than their characters, which is rather traditional given the difficulties very young actors have in playing Shakespeare. Franco Zeffirelli’s great 1968 film of the play achieved the rare feat of succeeding with 16-year-old Olivia Hussey and 17-year-old Leonard Whiting, but when famous actors are involved it’s more common for them to be in their late twenties, thirties, or even older. Laurence Olivier was 36 when he costarred (unsuccessfully) as Romeo on Broadway with Vivien Leigh as Juliet, who was 27, in 1940. Modern Broadway Juliets include a host of actresses of a certain age. In 1923 alone, when there were three Broadway Juliets, Julia Marlowe was 58, Ethel Barrymore was 44, and Jane Cowl was 40. Eva Le Gallienne, then an infantile 24, did it Off Broadway seven years later, but when Katherine Cornell gave Broadway its great revival of 1934, she was 41, while her Romeo, Brian Aherne was a mere 32. It’s hard to deny that, traditionally, Juliet has been more of a cougar than a teenybopper.


Orlando Bloom remains slim and lithe, and makes an attractive, energetic, and effective Romeo, despite his admitted lack of Shakespearean experience. My nearly 22-year-old granddaughter, Briar, had no trouble accepting Mr. Bloom in the role, and said that he was exactly what she’d always imagined Romeo to look like. Ms. Rashad, given the play’s history on Broadway, is practically a minor, and she gives a respectable performance, some scenes being a bit of a struggle (like her death scene in the tomb) and others (like that on the balcony) being quite touching. Her voice is a bit too high-pitched and, although very attractive, she is also rather formidable-looking; at nearly 5’ 11”, she’s nearly an inch taller than her Romeo. (Oh, THAT’s why he wears those thick-soled and heeled shoes!)


The direction, for all its cleverness, is not all it could be. Because the young men are played by older actors, however, including the 42-year-old Christian Camargo as Mercutio, director Leveaux seems to have felt it necessary to amp up their hi-jinx, so they often engage in playful teenage antics, jumping all over each other as if to work off their excess energy, which gets rather tedious, as does the director’s choice of having the actors, including Ms. Houdyshell’s nurse, emphasize with physical gestures every possible bawdy word or inference. The audience laughed dutifully at these bits, but much of it is unnecessary. Among other directorial touches is the very lengthy kiss Romeo plants on Juliet's lips when he first meets her at the ball, done in full view of anyone who cares to look; no one does, for that might have put an end to Romeo and the play right there. On the other hand, when Romeo first sights Juliet across the crowded room, Mr. Leveaux has her all the way up stage right, with Romeo far away down stage left, with dancers in between them. So while he, if not some seated in the audience, can easily see Juliet at this moment, no one, except the audience, can see him kissing her in what appears to be the middle of the ballroom. In another doubtful touch, when Juliet takes the potion and seems to die, the bed she is lying in flies up to the top of the stage, where it remains until the tomb scene when it descends again. Ms. Rashad must lie there, unmoving, all the while, surely not the most comfortable situation. I wonder if Katherine Cornell would have consented to such a directorial choice.
To guarantee that Shakespeare’s dialogue is easily comprehensible, the verse often goes out the window in order to break the rhythm into more prose-like speech. The several fight scenes, well-staged by Thomas Schall, are exceedingly swift and fluidly performed, with knives mostly standing in for swords. Percussion and cello music accompanies much of the staging, with the drummer (David Van Tiegham, who composed the helpful original music) in a side balcony at stage left and the cellist (Tahirah Whittington) in one at stage right. And, in one of the few nods to the casting’s racial divide, the ball dancing has a Caribbean ethnic (tribal, Briar suggested) flavor; “movement direction” is credited to Nancy Bannon. In general, then, the approach is to make the material accessible, and it must be admitted that the audience seemed to be with the production every step of the way. There was a standing ovation, but this is now so common on Broadway, it can ordinarily be ignored as a sign of a show's success.


All the actors give commendable, if not brilliant, performances, with one exception. Mr. Camargo’s Mercutio is lively and animated, and his “Queen Mab” speech is delivered with clarity and flair; many productions of ROMEO AND JULIET often receive their finest performances from the actor in this role. Ms. Houdyshell, always excellent, makes no breakthroughs here, either comedic or pathetic. Geoffrey Owens's Prince is appropriately authoritative, Brent Carver’s Friar is intelligent but dull, Conrad Kemp’s Benvolio is too given to shouting, Corey Hawkins’s Tybalt is monotonously nasty, and Justin Guarini’s Paris is bland. There is one truly conspicuous performance, however, that of Chris Cooper as Lord Capulet, playing this frequently neglected role with a spectrum of emotions demonstrating his remarkable power, not only at conveying fatherly love, humor, and warmth but at blowing the roof off with fiery anger and disgust. This is a plus-sized talent (physically and emotionally) who must move on to play bigger and greater classical roles. He would be a phenomenal Lear and a great Falstaff.


Very soon, New York will have another ROMEO AND JULIET, starring Elizabeth Olsen (24-years-old), and the unknown Julian Cihi, a graduate student in theatre at NYU. There should be plenty of things to say about that Off-Broadway version, at the Classic Stage Company, in comparison with the Bloom-Rashad one on Broadway. Till then, parting is such sweet sorrow . . .
Posted by Samuel L. Leiter at 12:48 PM