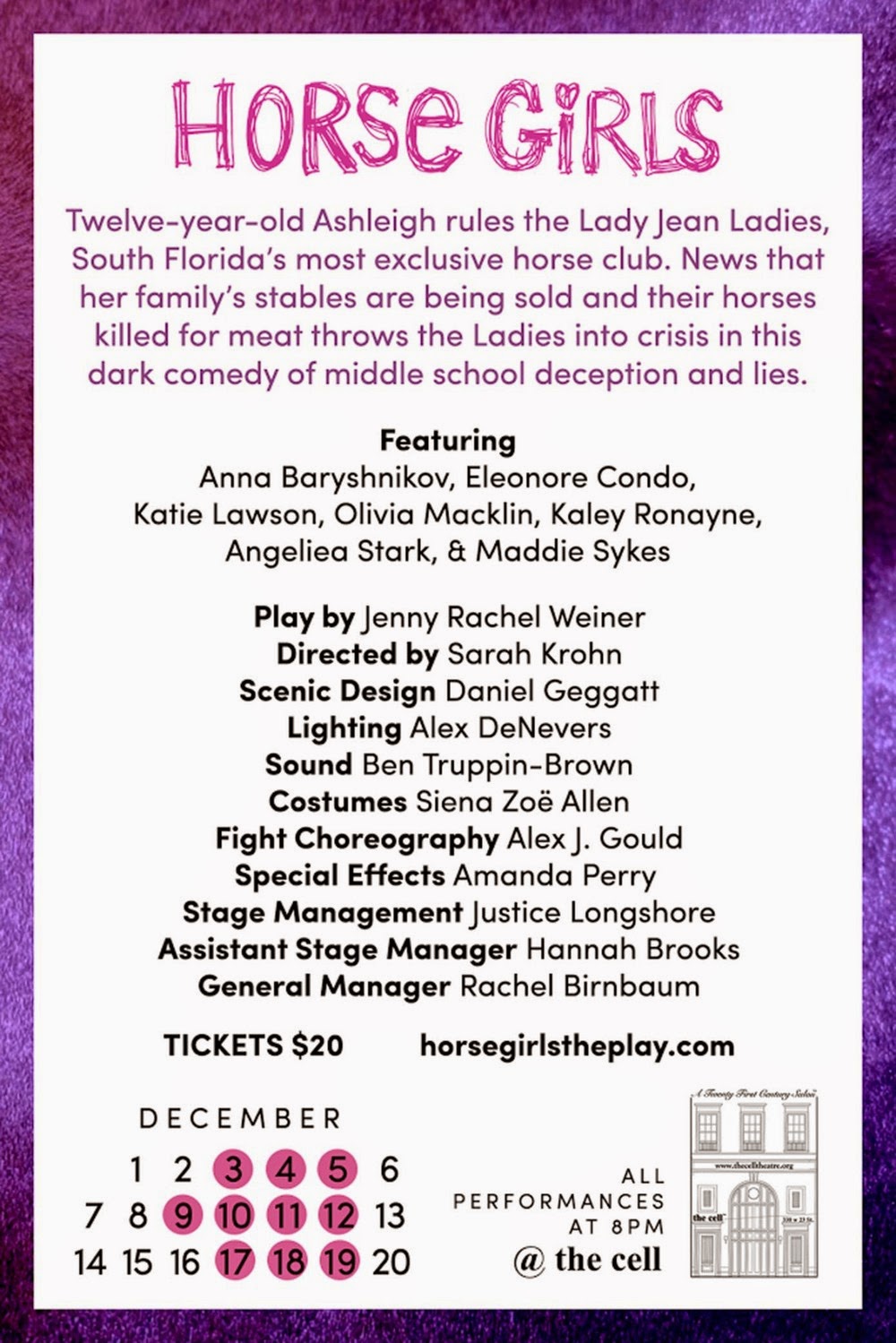 Oh my God, you guys, like you’d really better get down to the Cell Theatre to see this new play if you want to spend some time with some awesome cool girls who are like so into horses their motto is “Boyz May Come and Boyz May Go But Horses R 4Ever”!

Jenny Rachel Weiner’s amusing little black comedy, just this side of sketchdom, closed on December 19 but has now reopened to run until January 23. It takes you into the hearts and souls of seven horse-loving tweeners, exposing their prepubescent fixations and verbal and physical tics with pinpoint accuracy. The plot goes a bit south in the last 15 minutes, but enough charm has been stirred up by then to keep you engaged even when all credibility has flown. If the piece ran any longer than its just-right 50 minutes, I’d have begun itching to put my feet in the stirrups and gallop off down West 23rd Street.

The setting is the girly-girly bedroom (well designed in the tiny Cell space by Daniel Geggatt) of the wealthy Ashleigh (Olivia Macklin), 12-year-old president of the Lady Jean Ladies, a suburban Florida club passionately devoted to the art of equestrianism. Trophies, in the form of statuettes and ribbons, abound, since Ash, whose family owns the adjoining Lady Jean stables, is a champion rider. Ash, once fat but now a sleek blonde with carefully tended tresses that her friends vie to have the privilege of French braiding, sits tall in the saddle, dominating her friends with the carefully calibrated methods of a classic mean girl manipulator.
The other kids come in a variety of sizes, shapes, and hair styles and colors, including the brunette Tiffany (Angeliea Stark), the club’s 13-year-old vice president, Ash’s best friend and closest competitor, and the only other girl who owns a horse; Robin (Maddie Sykes), Tiff’s chubby sister, who serves as the secretary; 12-year-old, braces-wearing Margaret (Karley Ronayne), tall, gawky, and inclined toward human fillies; 12-year-old Brandi (Katie Lawson), bespectacled club historian, with a mouth on her; 13-year-old Camille (adorable blonde Mariah Lee, understudying Anna Baryshnikov, daughter of you know who), who brings her 13-year-old cousin, Trish (Eleanore Condo), along to the meeting. The roundish Trish, from a liberal Manhattan family, provides, through her various expressions, an outsider’s bewildered, skeptical perspective on the goings on.

The gathering, with its jealousies, hazing, and group rituals, reveals how the girls jockey for favor and toady with power. As in the recent Punk Rock, when unsupervised young folk get together in a play, Lord of the Flies is never far behind. Making the girls’ love for horses the thing that ties them together—horses, of course, can be seen as a sublimation of prepubescent sexual desire on a level with whatever pop singer young girls are obsessing over—allows playwright Weiner to set up a situation that brings the girls’ frustrations to a boil. This happens when Brandi, 20 minutes late for the meeting, bursts in with the horrible news that the stable and its horses are being sold, with the animals to be turned into horse meat.

From this point on the play’s heightened comic realism begins to merge with farcical surrealism. It’s easy enough to buy the girl’s hilarious attempt to ask Ann Romney, whom the girls revere as a patron saint, for help by trying to reach her through Michelle Obama at the White House, but when an eruption of violence leaves the stage littered with—well, let’s just say it’s not horse meat—you can be excused for thinking Horse Girls needs to be reined in. Still, there’s a bizarre poignancy to the final moments as Ash, alone under a disco ball with her hair blowing in the wind, struggles to sing Mariah Carey’s “Forever” to a karaoke accompaniment.

Director Sarah Krohn does a terrific job in creating an ensemble of enjoyably believable maidens, all excellently played by actresses in their twenties. Each (aided by the pitch-perfect costuming of Siena Zoë Allen), is clearly defined, with her own quirks and habits; as expected, there’s a surfeit of declarative statements ending in upward inflections. The girls’ phantasmagorical reaction to news of the horse’s fate, done under strobe lights, is effective, but something similarly stylized seems called for when the (rather pale) gore begins to flow.

Much as Horse Girls sometimes seems like parodistic fluff, along the lines of an extended SNL bit, its strengths and weaknesses were enough to spark a lively discussion with my guest as we sat on the subway afterward. That’s what good, even if imperfect, theatre should always do. Ride on, Lady Jean Ladies, ride on!