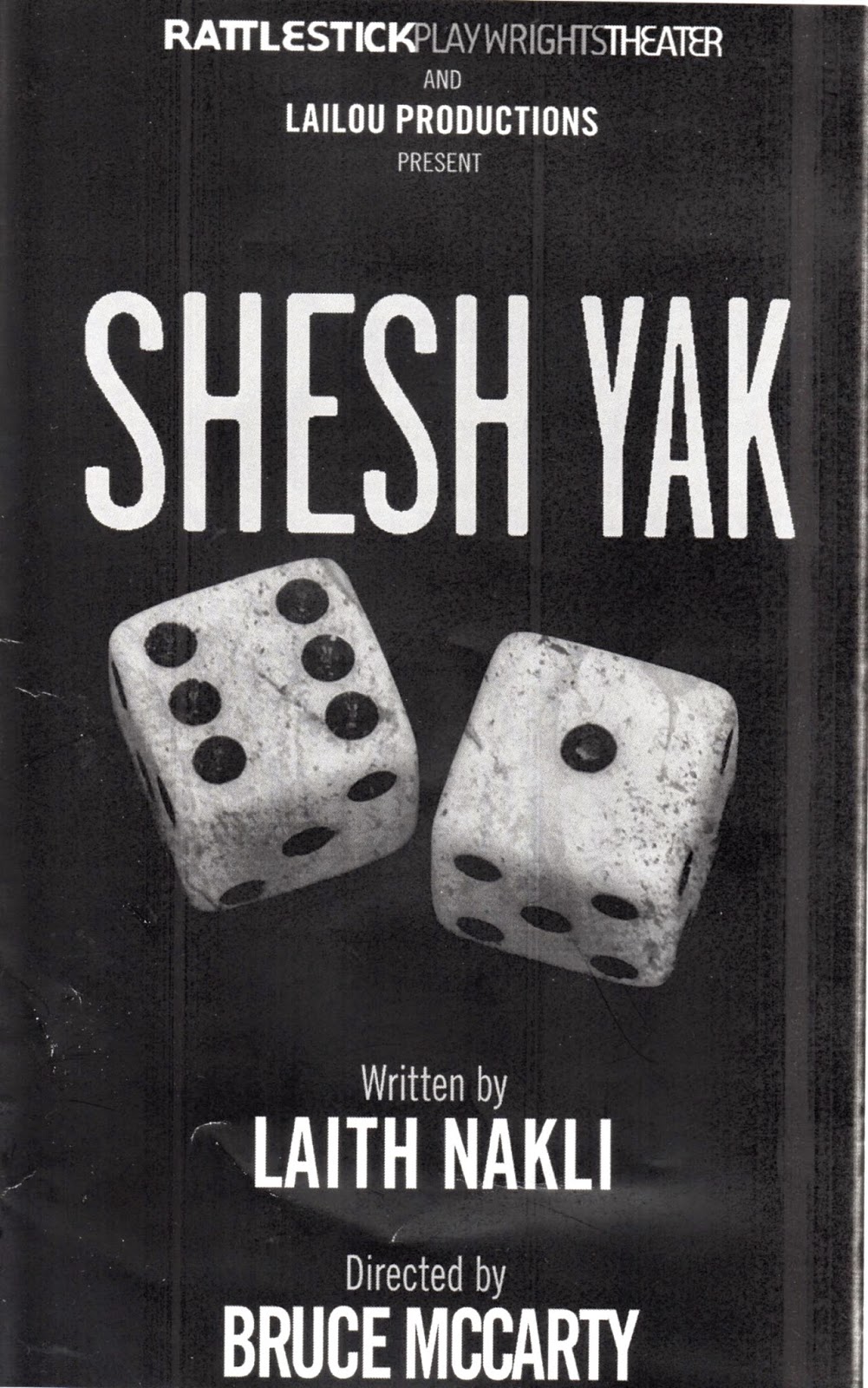 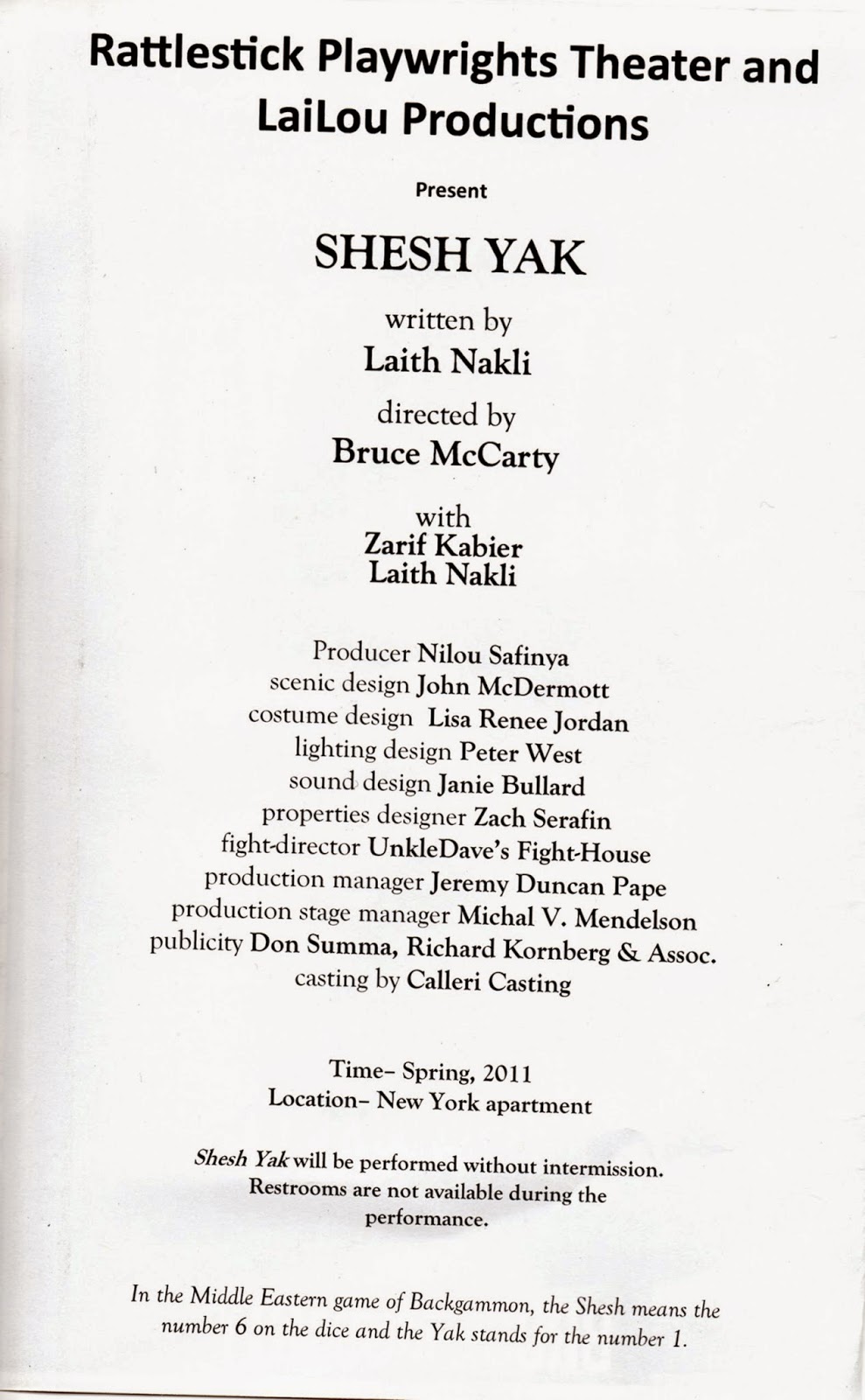 “Ripped from the headlines” is the way reviews often characterize plays inspired by the political zeitgeist in the Middle East and South Asia. Examples: DISGRACED, set in New York but touching on Islamic extremism; the same author’s recent THE INVISIBLE HAND, about an American prisoner of Pakistani terrorists; and the currently running THE ROAD TO DAMASCUS and SHESH YAK. The last two take place in the United States but are preoccupied with Syria, the first dealing with the near future, the second with events of the past.

THE ROAD TO DAMASCUS deals with the specter of specific political events and has global implications, while SHESH YAK concentrates on incidents in which its two characters, Jameel and Haytham, participated; it deals with universals such as guilt, redemption, and forgiveness, but it does so on a highly personal level. Despite taking place in 2011, during the Arab Spring, the background could be applied to many circumstances in which someone seeks vengeance for wrongs done under a repressive political regime. In fact, the play, by Syrian-British playwright Laith Nakli, who also plays Haytham, is strikingly reminiscent of a much better play, DEATH AND THE MAIDEN, by Chile’s Ariel Dorfman.

Dorfman’s play, set in a Latin American country, tells of a female political prisoner who was raped by one of her captors. Years later, under a new regime, the rapist happens to visit her home; recognizing him, she binds him so that she can get him to confess his guilt. For much of the play, which also involves the woman’s husband, the rapist sits bound before us during the interrogation.

In SHESH YAK we’re in the slightly shabby New York apartment (realistically designed by John McDermott and nicely lit by Peter West) of Jameel (Zarif Kabier), a guy in his thirties whose mother keeps calling from Syria to urge him to find a girl and get married. This may be intended to show what a regular fellow Jameel, once a potential soccer star, really is. When the play begins he’s visited by the burly, middle-aged Haytham, a former karate champ, whose severe limp will later be cruelly exploited. Both are Syrian émigrés and Jameel appears overwhelmed with pride to have Haytham, a supporter of the Free Syrian Army, as his guest. Haytham, after all, is about to appear on a TV panel discussion. Apart from its mention of things like the Secret Police, the Syrian conflict is used mainly for context and isn’t the play’s principal subject. In fact, SHESH YAK assumes the audience is familiar with the politics and offers little expository background. It’s almost as if the words “Assad” and “Islam” don’t exist (although an Islamic state and the Islamic Brotherhood are each referred to once).

The enthusiastic Jameel treats Haytham deferentially but, after they begin playing backgammon, he slips his guest a mickey. When Haytham comes to he’s bound and, occasionally, gagged, as the now threatening Jameel questions him, often brutally (oh, that gimpy leg!). Now and then someone phones Jameel, suggesting that what’s happening is part of a planned conspiracy, but the situation remains ambiguous. Gradually, Haytham and the audience learn the reason for Jameel’s animosity.

Shesh Yak (a reference to the numbers six and one on backgammon dice) runs for 80 minutes but seems much longer because of its increasingly static nature, with Jameel circling his prey as he leads up to his big reveal. Their chit-chat adds local color about life in Syria, but offers little of great personal or political interest. Meanwhile, Haytham must grimace in agony as his tormented tormentor torments him; when Jameel’s revelation finally arrives, it’s nothing we might not already have figured out for ourselves. The mildly surprising conclusion that follows is about the only unpredictable thing on view.

SHESH YAK demands a sense of danger and suspense, but neither of its actors, for all their competence, is capable of taking it to that level, and director Bruce McCarty hasn’t been able to inspire anything approaching the necessary cat and mouse tension. It doesn’t take long before you begin to feel almost as captive as Haytham.