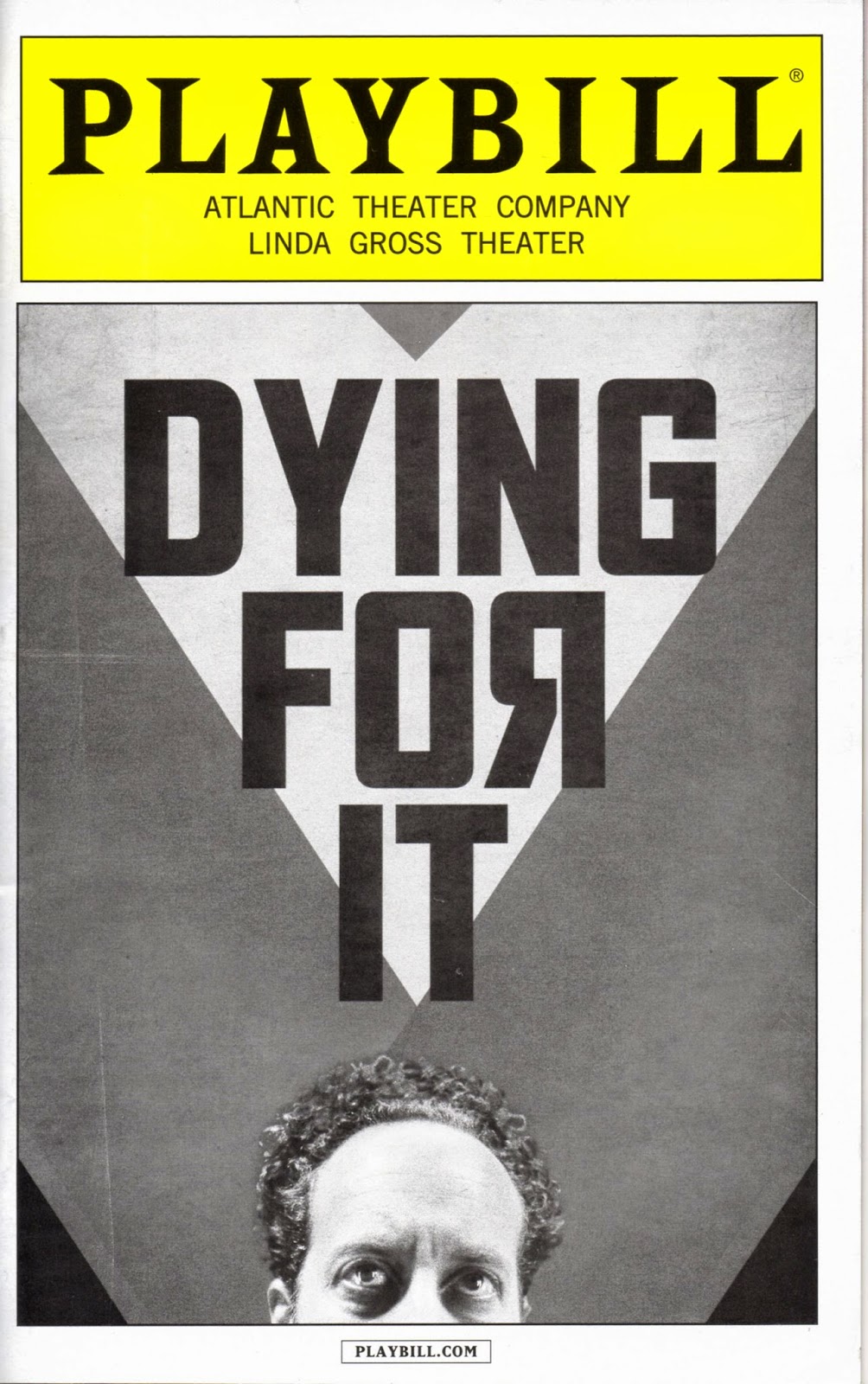 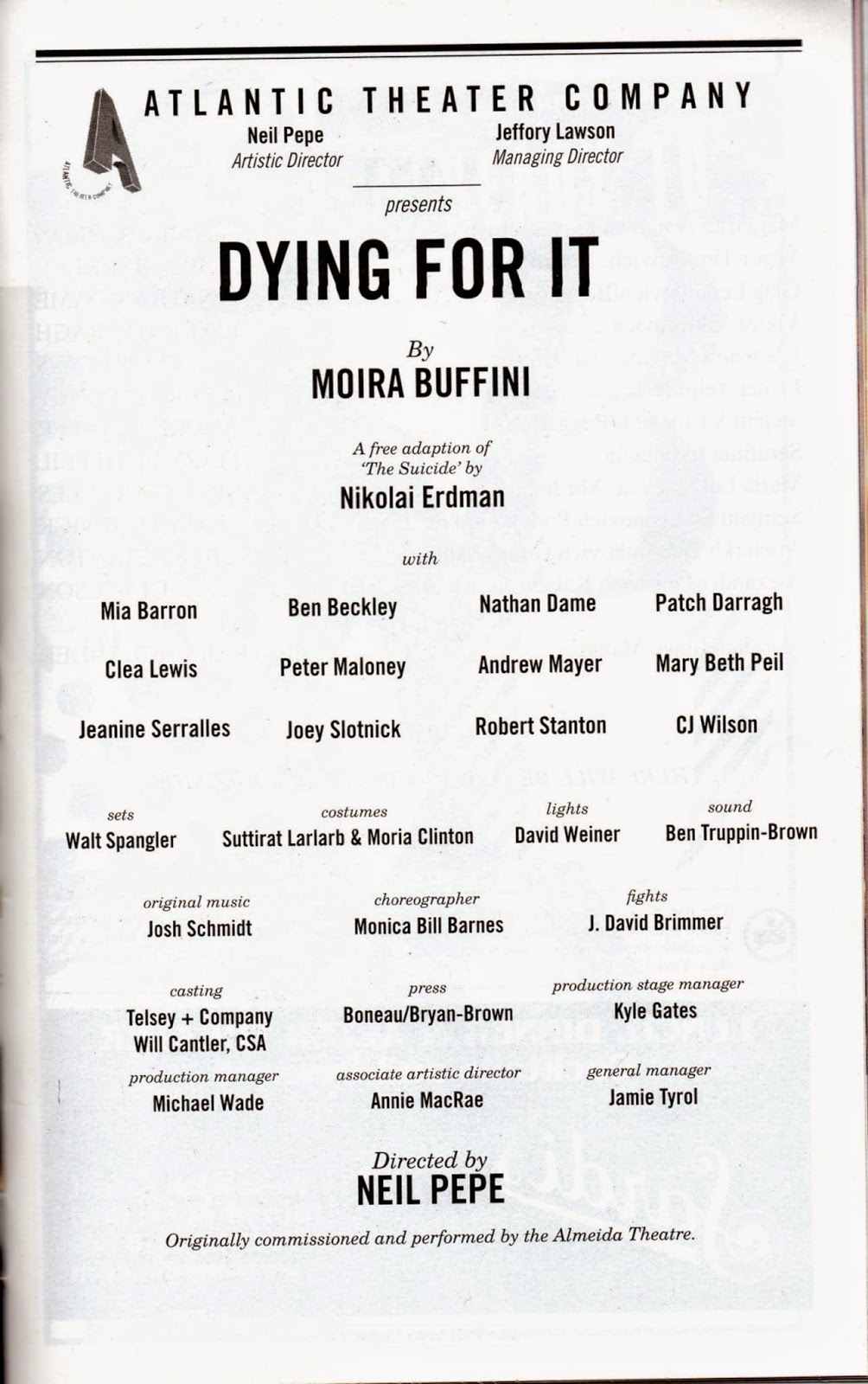 There’s a definite timeliness to this generally unexciting revival of Soviet playwright Nikolai Erdman’s (1900-1970) historically important political satire, whose title has been changed by British adaptor Moira Buffini to DYING FOR IT from the much better-known THE SUICIDE (Samoubiitsa). It was under the latter name that I saw this tragic farce when it appeared on Broadway, starring Derek Jacobi, in 1980. 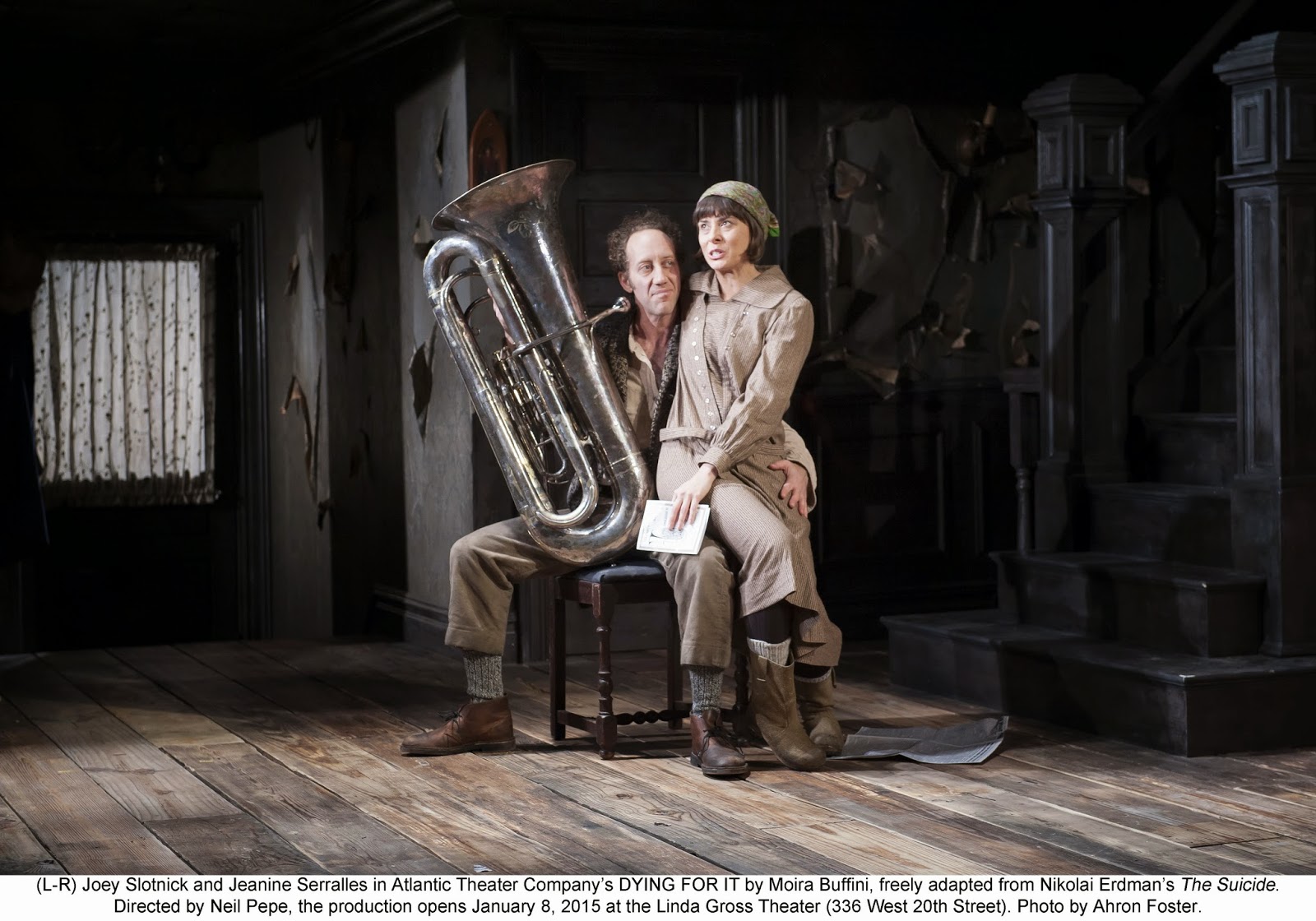 Its timeliness comes not so much from its subject matter—which pokes fun at the repressive Soviet government under Stalin—but at the circumstances surrounding its production history. Attempts to stage the play by both Vsevelod Meyerhold and Konstantin Stanislavsky were stopped by Stalin’s censors in 1932, and the playwright himself was arrested and exiled to Siberia from 1933 to 1936. When he returned he wrote principally for feature and animated films. In 1969 a Swedish world premiere led to the play’s receiving international recognition; the script had been smuggled from Czechoslovakia, where a planned 1968 production had been halted when Prague was occupied by Soviet troops. In 1982, after productions in Germany, England, Canada, and the United States, THE SUICIDE received its Moscow premiere, but was closed down after only six performances. By 1987, however, perestroika had ushered in a more liberal atmosphere, and the play soon was being staged all over the Soviet Union. 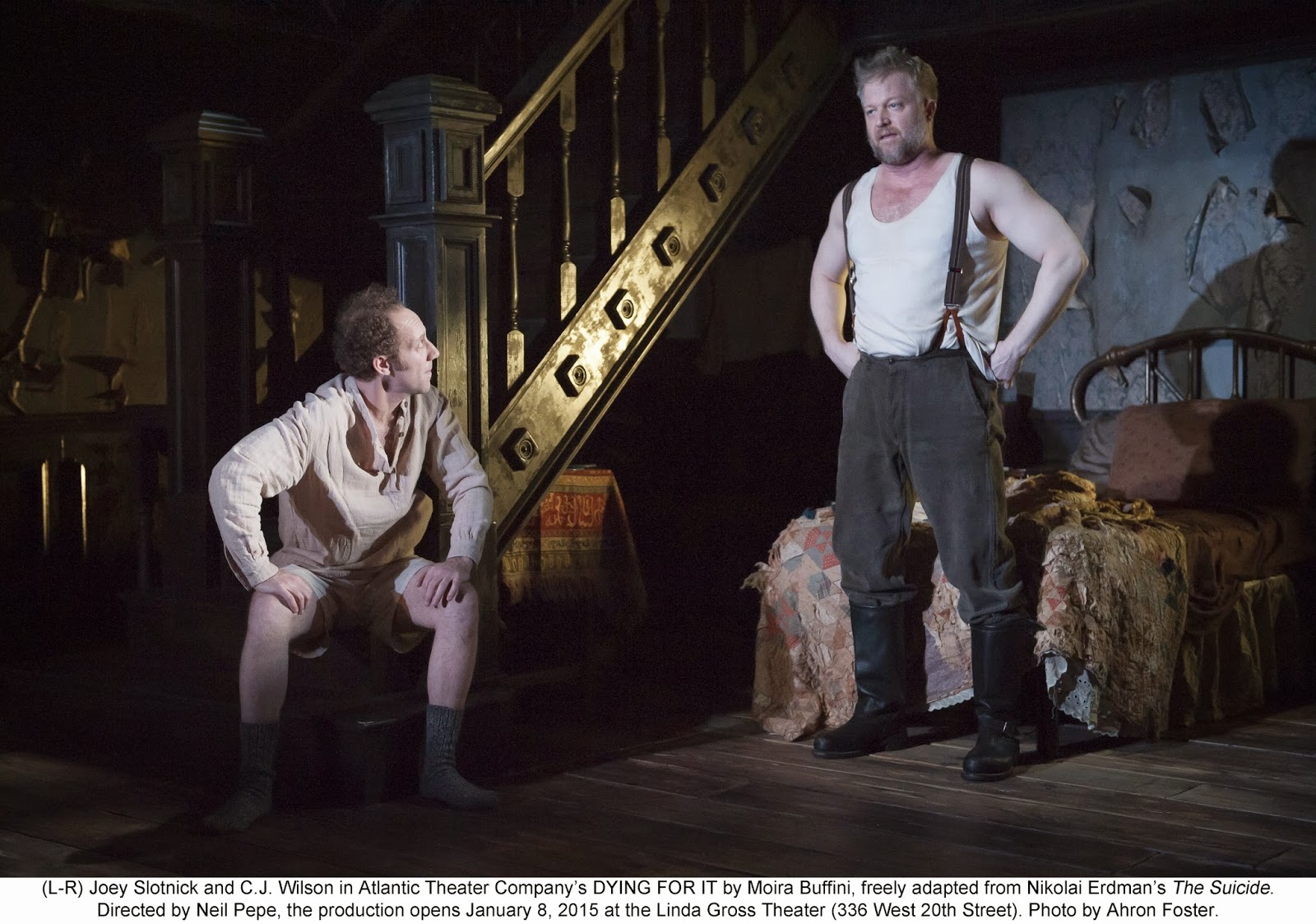 I saw DYING FOR IT on the day when Charlie Hebdo, the French satirical magazine, was murderously attacked by Muslim extremists who were reportedly disturbed by cartoons they found offensive. This made it impossible to separate the performance from its relation to the problem of free expression, so basic to our Western notions of democracy, most recently in the news because of a movie making fun of North Korea’s leader. America itself, of course, has its own history of repressive censorship, examples of which continue to emerge on the local, if not the national, radar. 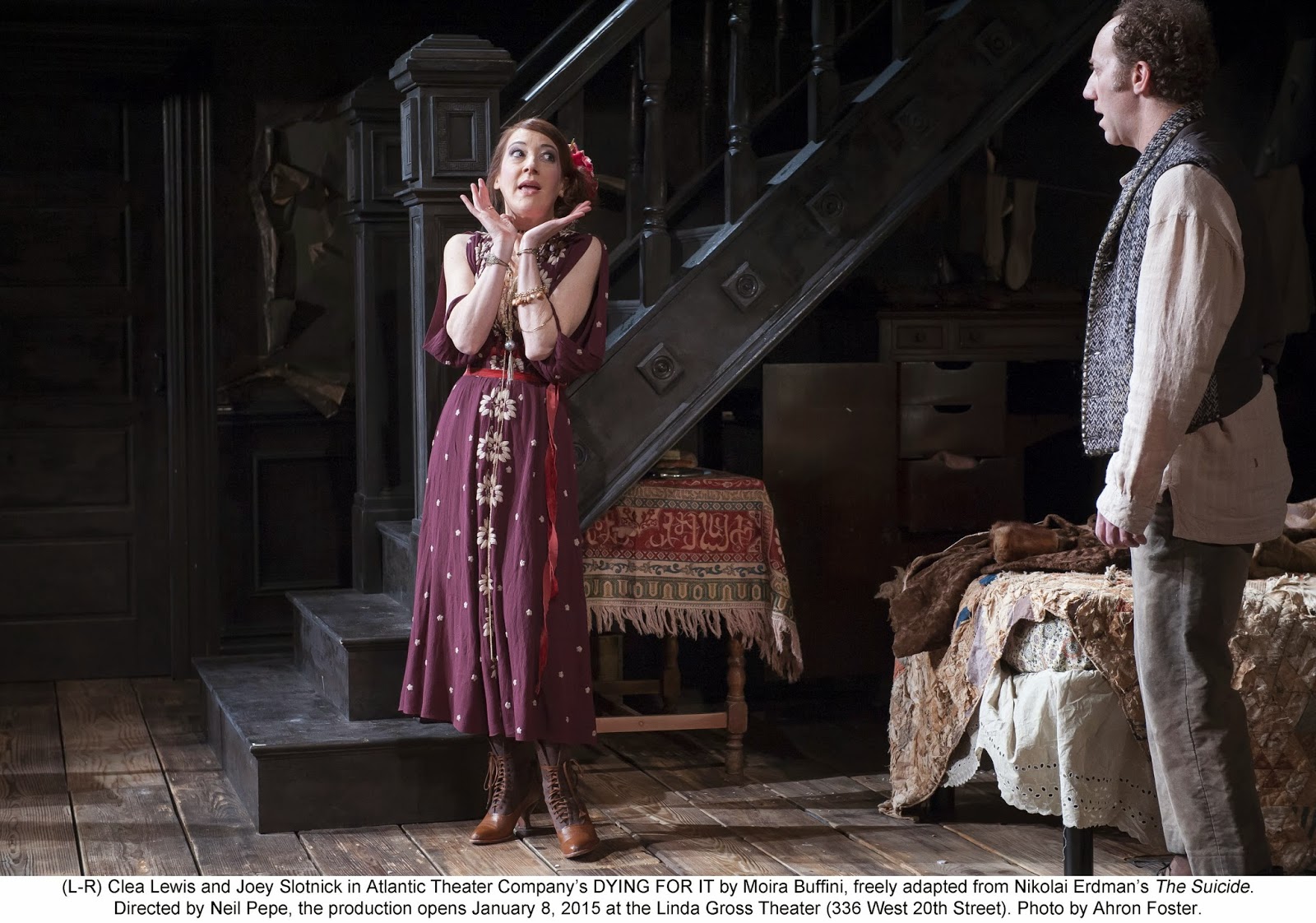 Ms. Buffini’s is actually one of at least nine English-language adaptations of Erdman’s play; it changes the title but remains attached to the world of 1920s Stalinism, with its location in a ramshackle, multi-floored, decrepit tenement shared by disparate characters. A number of changes have been made to Erdman’s script, itself the subject of numerous revisions, including greatly reducing its length (the play runs two hours), using only a single location, and eliminating various characters, including Erdman’s original “suicide” (the person, not the act) referred to in the title but now omitted from the dramatis personae. 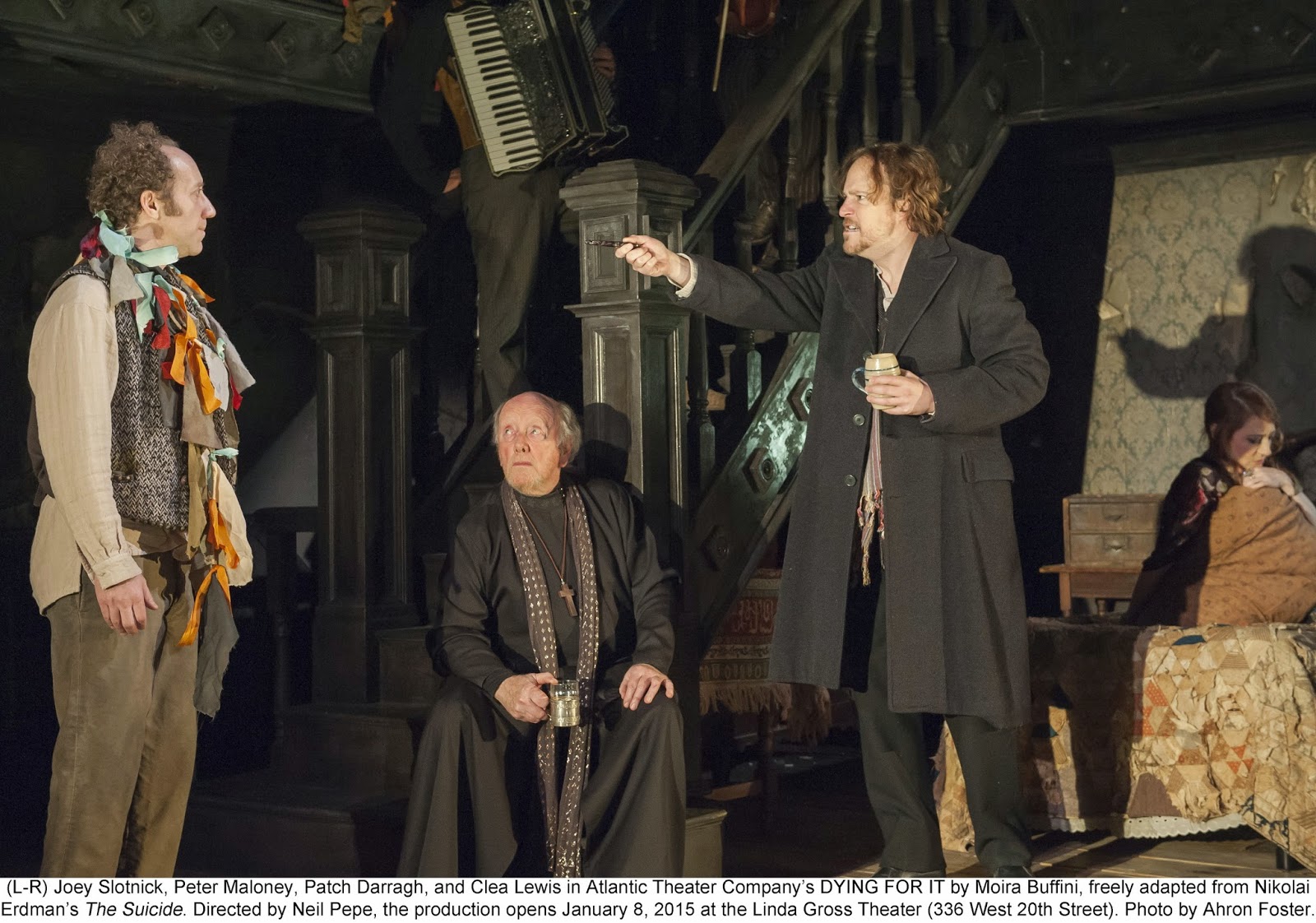 Semyon Semyonovich Podeskalnikov (Joey Slotnick) is a poor, unemployed, clueless, self-centered schlub living with his wife, Masha (Jeanine Serralles), who supports him, and his pest of a mother-in-law, Serafina (Mary Beth Peil). They occupy what is essentially a hallway space because they can’t afford a room of their own. Depressed about his inability to find a job, Semyon cooks up a harebrained scheme to teach himself to play the tuba so he can make a living, but when it goes bust, he decides to kill himself, obtaining a pistol for the purpose. A neighbor, the strapping Alexander Kalabushkin (CJ Wilson), aware of Semyon’s plan, decides to capitalize on it by taking money from a string of unhappy persons who think they can use Semyon’s suicide to further their own aims. Semyon is happy to profit from what transpires. 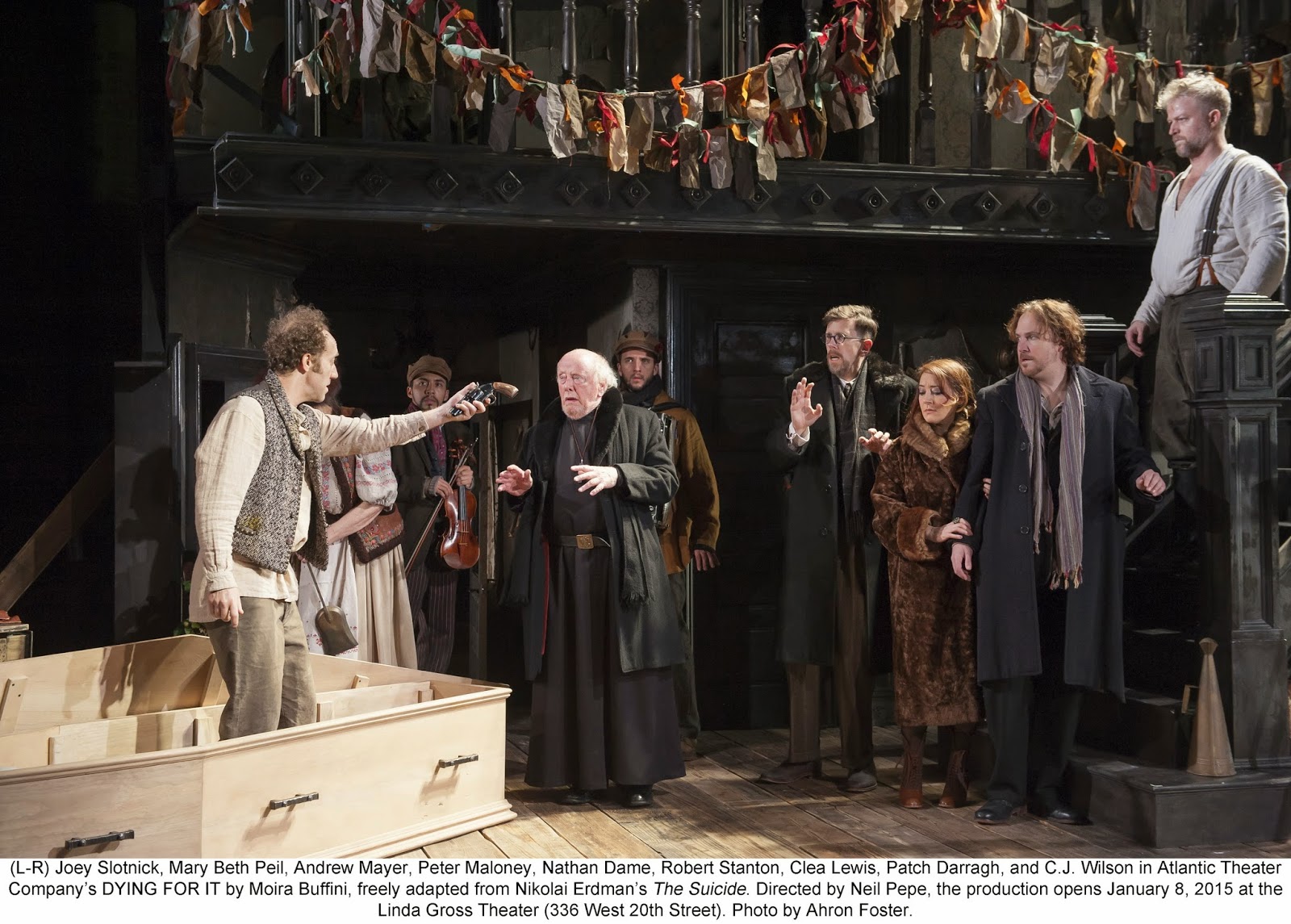 These colorful stereotypes include the intellectual, Aristarkh Dominikovich Grand-Skubik (Robert Stanton), an opponent of political tyranny; Viktor Viktorovich (Patch Darragh), a poet seeking artistic liberty; Father Yelpidy (Peter Maloney), a lecherous old priest hoping for religious empowerment; Yegov, the postman, who wants to exploit Semyon's death in the interests of his ideology; and a hooker named Kleopatra Maximovna (Clea Lewis), called “Kiki,” on behalf of romanticism. Each wants Semyon to write a suicide note stressing their specific cause. Then follow the farcical events connected to Semyon's anticipated suicide. Subsequently, a lot of the action takes place around a coffin, there’s an ironic ending, and, despite its title, the play turns out to life-affirming.

Throughout, many unsayable things about Marxism and the Soviet government are aired, cautiously by most but candidly by Semyon, the nebbishy Everyman who has nothing to lose. Even today, one winces at some of these comments, knowing the Kremlin’s ruthlessness. Given the naughty things Semyon says, it’s surprising that Erdman got only three years of exile for his outspokenness. (His sentence may have been softened by Stalin’s fondness for JOLLY FELLOWS, a movie Erdman had written.) I suspect, though, that the many middle-aged Russians attending (the lobby and basement lounge were buzzing with Russian chatter when I went) will find the play dated.

DYING FOR IT, to use its current title, is the kind of experimental European play that made Russian theatre of the late 1920s world famous. Its association with the leading experimentalist, Meyerhold, who staged Erdman’s The Warrant in 1924, reflects its avant-gardism. Neil Pepe’s production, however, despite the fiddler and accordionist who introduce the play with vivid Russian tunes, also performed between each scene, inclines toward the drably realistic. Walt Spangler’s imposing tenement set is filled with dreary details, including peeling wallpaper, and both David Weiner’s lighting and the costumes of Suttirat Larlarb and Moria Clinton heighten the sense of a  bleak time and place.There's little here that suggests Meyerhold’s iconoclastic theatre (he was arrested in 1939 and executed in 1940).

The acting, while energetic, is no more heightened than that in, for example, the current revival of YOU CAN’T TAKE IT WITH YOU. Unlike the comic conviction of the cast in that production, however, the actors in DYING FOR IT struggle to invest their characters with truthfulness. Some (like the always reliable veterans, Mr. Stanton and Mr. Maloney) are more engaging than others, but the overall tone is forced and artificial. In this ensemble’s mouths, Ms. Buffini’s colloquial language (including the “f” word) has that ersatz quality so typical of translated plays. When the audience laughed, it often seemed more dutiful than organic.

DYING FOR IT remains intellectually and historically interesting. This earnest, hardworking production, however, lacks the conceptual inspiration that might have given it life.