"Parting Was Not Such Sweet Sorrow" 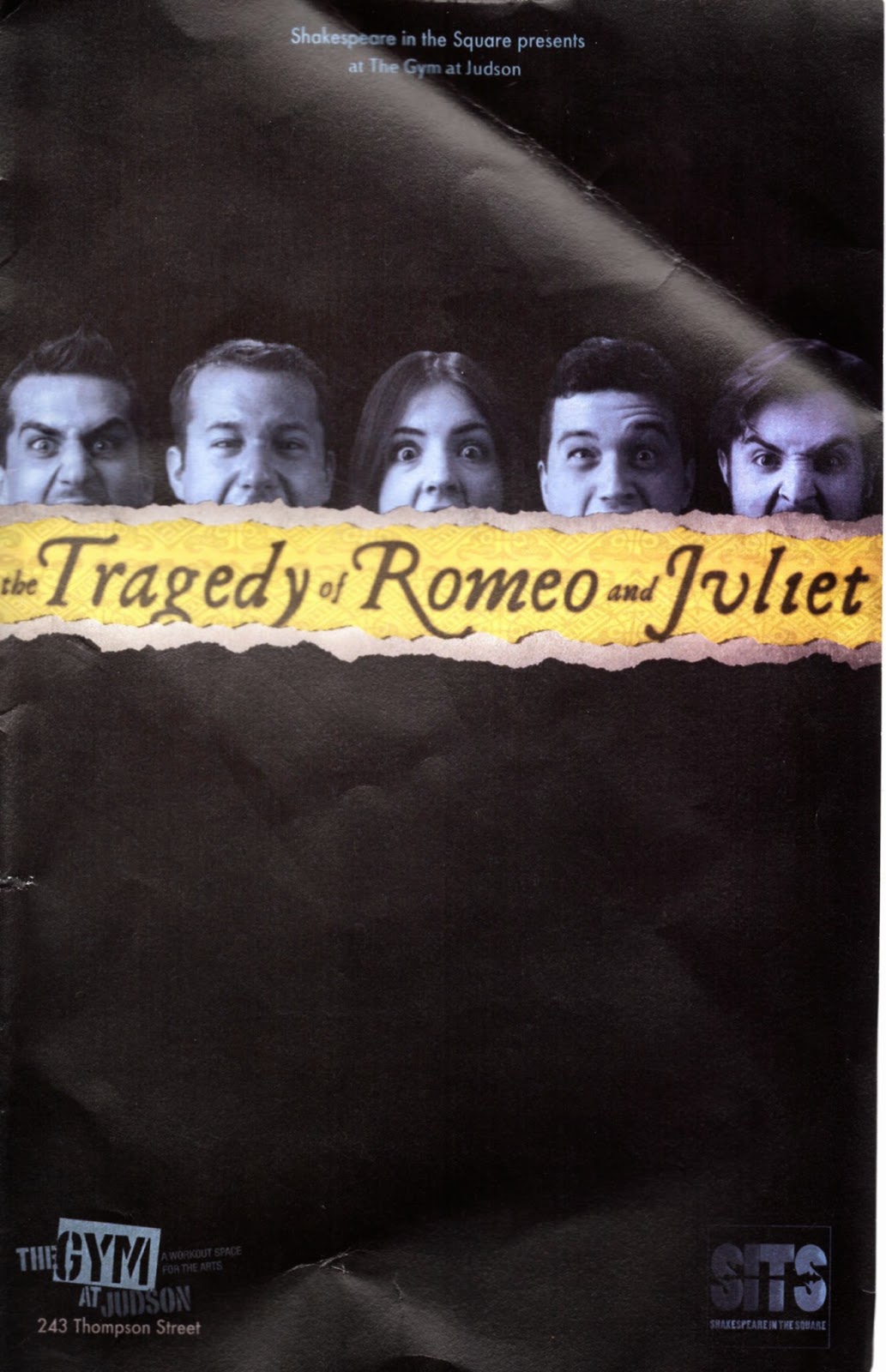 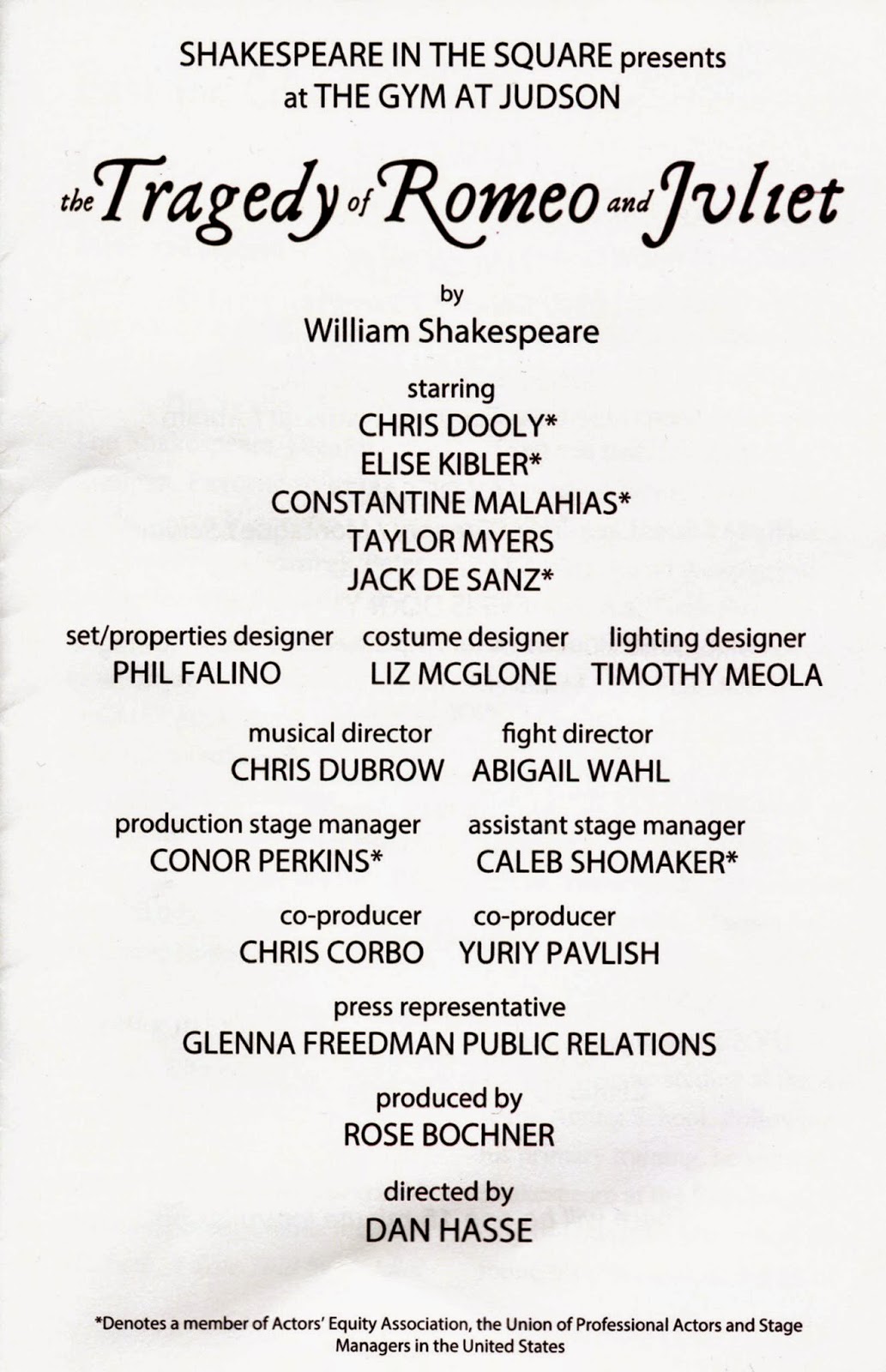 Just as memories of two ill-fated revivals of Shakespeare’s tragedy of young love—one on Broadway and one Off—have begun to fade, along comes yet another earnest but similarly unsuccessful attempt to bring this beautiful play to life. Unlike its predecessors, each of which featured a movie star—Orlando Bloom on Broadway, Elizabeth Olsen Off—the current version, given by a company dubbed Shakespeare in the Square, employs a cast entirely made up of unknown young actors who started their ambitious venture as a club when they were students at NYU; they're now in their fifth season, although this is my first encounter with them. The Square in their name, of course, would be Washington Square Park, just across the street from their present venue in the Judson Gym, where they’ll open an outdoors staging of their next shot at the Bard, MUCH ADO ABOUT NOTHING (another play with a surfeit of local stagings), in April.
Director Dan Hasse has made some bold choices, one of which is to stage an uncut version of the text after comparing the 1623 Folio version with later editions and removing the “errors” that crept in, among them the attribution of “Parting is such sweet sorrow” to Juliet, rather than Romeo. Even more daring (but also more foolhardy) is the decision to do this challenging material with only five actors, each of them playing multiple roles. For example, Taylor Myers not only plays Romeo, but also covers Lady Capulet and the tiny roles of Sampson and Anthony, while Elise Kibler handles Juliet, Benvolio, Friar John, and a servant role. Jack De Sanz’s five roles include the Nurse, Friar Lawrence, and Montagu; Chris Dooly’s duties embrace not only Tybalt, but Paris, the Prince, Lady Montagu, and so on; and Constantine Malahias has the job of doing Mercutio, Capulet, and two minor roles. Without truly versatile and experienced actors, however, the result is anything but a coup de théâtre. The task isn’t impossible, though, as a four-actor version of HAMLET by the Bedlam Theatre (who did the same with ST. JOAN) recently demonstrated.
Would that the care for authenticity that went into restoring the script had gone into other elements of the production. The everyday, and not particularly interesting, street clothes provided by costume designer Liz McGlone remain essentially unchanged, no matter which character is being played, apart from minor adjustments or additions. When the trimly muscular Romeo, dressed in tight black jeans and a gray wife-beater, changes to Lady Capulet, he dons a bustier and black skull cap, but otherwise remains the same. Caps, scarves, and the like help a bit to differentiate the roles, but if you don’t already know the play, you’re likely to be at sea determining who is who. There's nothing in this poor man's WEST SIDE STORY world to visually suggest wealth or privilege. Shakespeare’s own productions may have used relatively few scenic units, but they were notable for the splendor of their costumes, often being the gifts or castoffs of the nobility.
The dullness of the costumes is replicated by Phil Falino’s set, a neutrally colored arrangement of simple platforming surrounded by the audience of about 50 seats and fronted by a plain, off-white mat spotted with what look like dirty footprints. An imaginative lighting design might have compensated for the blandness of the set and costumes, but for some reason, Timothy Meola’s lighting allows the night scenes to be played in near darkness. While the effect of people running around in the gloom with lanterns can be momentarily effective, it simply will not do to let actors deliver long speeches entirely, or almost entirely, without illumination. During the balcony scene, Juliet stands at a height, framed by a hanging frame to denote a window, while Romeo, down below, might as well be the Invisible Man. Similarly, the speech by the Prince that concludes the play is delivered by an actor standing a foot or two from a small pool of light, while he himself is so shrouded in shadow he could have phoned in his lines.
The actors are eager and, in other plays might find success; unfortunately, most are simply not up to the task of playing Shakespeare, at least as required under the demands of this approach. Perhaps inspired by Shakespeare’s famous line about “the two hours traffic of our stage,” not actually spoken in this version, they race through the script, completing it in around two hours and 35 minutes (including a 15-minute intermission), consistently eschewing subtlety for the obvious, especially when angling for a laugh. I must admit that the small audience present responded enthusiastically to their efforts, almost giving the impression, at least in the first of the two acts, that this was more a comedy than a tragedy.

There’s no attempt to speak the lines for their poetic values, the emphasis being on sounding as colloquial and everyday as possible. This often helps make the lines more comprehensible, but too many lines are muffled. Most difficult to hear (confirmed by my guest, a young high school English teacher) was Ms. Kibler, whose weak projection isn’t helped much by the pace at which she gabbles. Hopefully, she’ll raise the bar when she makes her Broadway debut this spring in the revival of THE HEIDI CHRONICLES.

Shakespeare in the Square as a company (38 members are listed in the program) appears to be chock-full of energy, spirit, ambition, and determination. There’s a sweet and upbeat vibe when you enter their space. It's their intention to make this into a “rowdy,” immersive event, with lots of audience participation, in order to recreate the atmosphere of an Elizabethan production. The cast sings to musical accompaniment in a sort of pre-show mini-concert, and there's more of the same during the intermission.

A small number of audience members are recruited to stand around (looking uncomfortable) during the ballroom scene when Romeo first meets Juliet, and there's also the occasional pointing to people in the audience as a way of underlining something mentioned in the dialogue. But I doubt you'd find the atmosphere rowdy. Perhaps this kind of thing works better and more consistently out of doors than it does in Judson Gym, and perhaps the company will succeed not only in being rowdy but also in being more theatrically effective their next time out.

THE TRAGEDY OF ROMEO AND JULIET
Gym at Judson
55 Washington Square South, NYC
Through February 8
Posted by Samuel L. Leiter at 8:41 PM