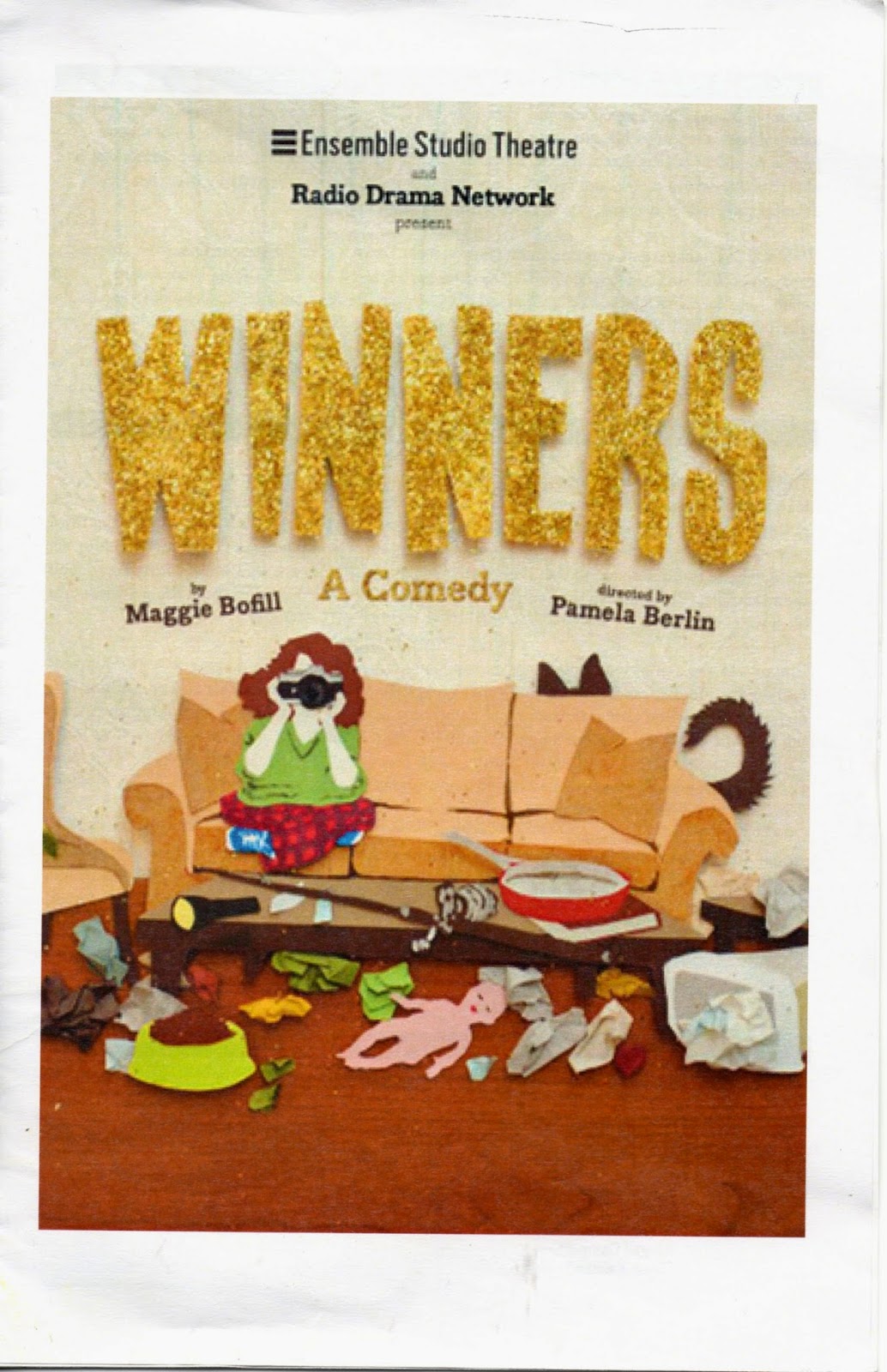 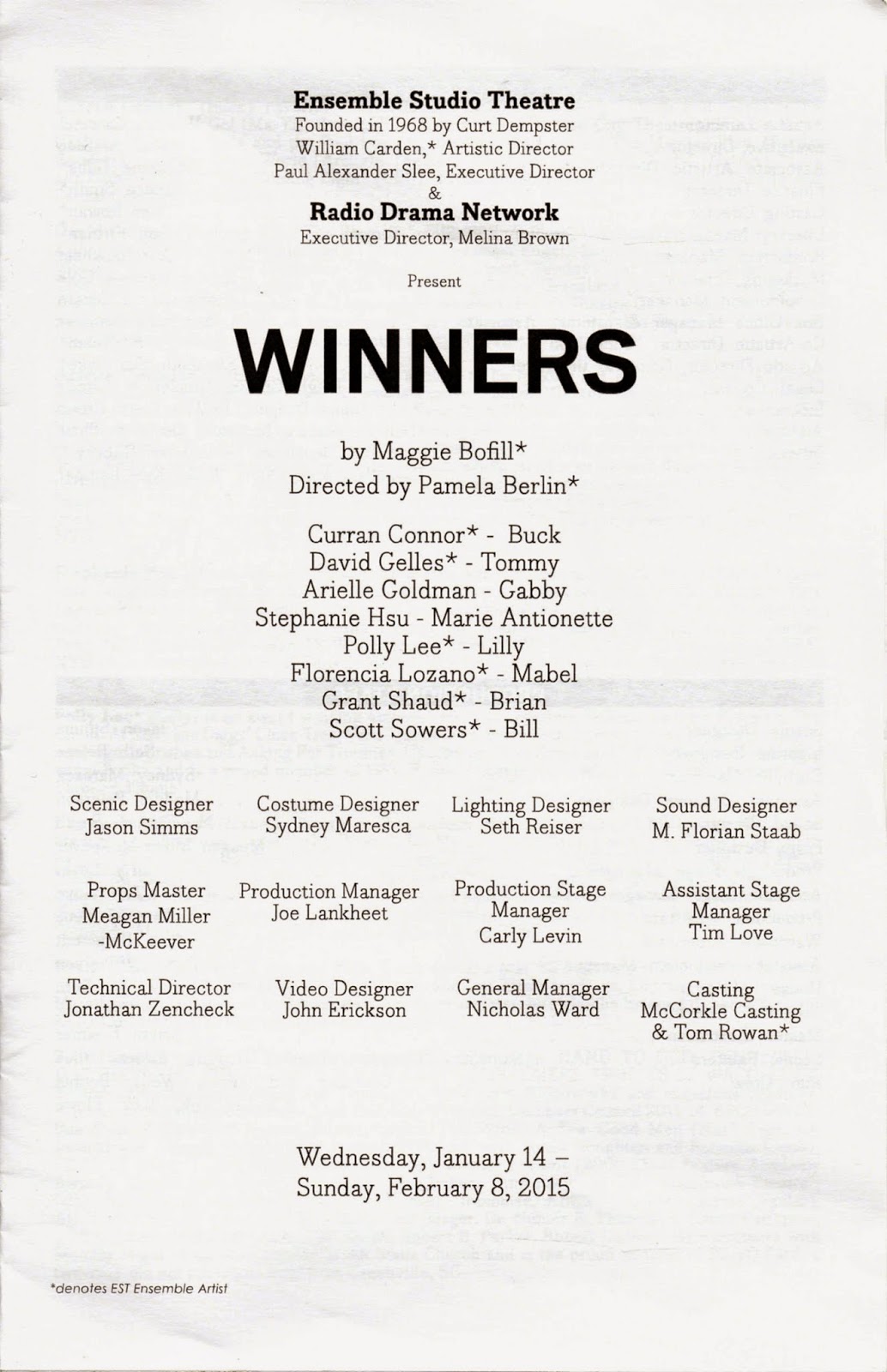 As I looked around the L-shaped seating arrangement at the Ensemble Studio Theatre, allowing me to see audience members across the space, I realized mine weren’t the only sleepy eyes watching Maggie Bofill’s lugubrious new comedy, WINNERS. Unlike my response to the similarly titled WINNERS AND LOSERS, at the Soho Rep, I’m afraid I’ll have to ring the loser’s bell on this outing about a dysfunctional suburban family struggling to make it through the recent recession.
Brian Mackey (Grant Shaud) has lost his job and taken to teaching himself cooking to fill his empty hours. His attractive wife, Mabel (Florencia Lozano), is the family’s sole breadwinner, upset about Brian’s fecklessness and having a fling with her boss. Their 16-year-old son, Tommy (David Gelles), is an unhappy, rebellious kid who lost his job at the Gap for smoking pot on the job. And 11-year-old daughter Gabby (Arielle Goldman) is a highly intelligent but hugely eccentric kid who dresses weirdly. She also goes around stealing various family items—including her mom’s cell phone, which contains an incriminating text—but only after photographing them. Gabby’s the kind of child who’s apt to respond to events by saying, "The horror . . . Oh, the horror!"

When Brian goes to the Gap to complain about his son’s being fired, the boss, Bill (Scott Sowers), who used to work with Brian before they both lost their jobs, hires him to replace Tommy, which only angers the boy more. That’s because Tommy saw Bill taking sexual advantage of another 16-year-old worker at the store, a girl named Mandy, on whom Tommy has a crush.

The two hour and 25-minute play (there’s one intermission) rambles along, detailing the edgy, sexually frozen, relationship between Brian and Mabel; Tommy’s various anxieties; and Mabel’s attempts to get a scholarship to a better school for Gabby. The latter means having to convince Lilly (Polly Lee), Bill’s wife, head of the committee, to favor Gabby. All comes to a head at the Mackeys’ dinner party thrown for Bill and Lilly at which Gabby and Tommy present a bizarre Christmas play Gabby’s been writing as a school project; it which uses the kids’ grievances as thematic metaphors. This leads to serious accusations, a visit to the police station, and, in a wacky final tableau that is more pathetic than moving, familial forgiveness.

Now what did I leave out? Oh, yes. The family has two animals, Buck, a dog, and Marie Antoinette. Perhaps because she felt the plot elements limned above weren’t sufficient, Ms. Bofill has made the pets into characters played by humans (Curran Connor as Buck and Stephanie Hsu as Marie), who wear human clothes (vaguely hinting at canine or feline qualities) and speak to one another in English but bark or meow when people are around. Their animal naughtiness (he roots around in the garbage can, she pees on her mistress’s pillow) is intended for comic purposes, but the whimsy wears off rapidly and you soon begin wishing you had a rolled up newspaper nearby.
There’s nothing here you haven’t seen in one sitcom or another. WINNERS may be called a comedy, but, for all its comical (even farcical) moments, the tone is more frequently like soap opera, with so much screaming you wonder if the actors’ vocal cords will make it through the run. Pamela Berlin’s direction does little to make anyone believable, her blocking is sometimes awkward, and the pacing too often is funereal. For all its plot complications, the piece seems merely to be running in place, accumulating business but taking forever to reach its goal. If I were looking for places to cut, I’d begin with those un-cute, overworked animals. PETA, where are you when we need you?
WINNERS, whose set is by Jason Simms, takes place in multiple locations, including various rooms in the Mackeys’ house, but also at the Gap, at Lilly’s office, and in a car. When the play opens we’re in the kitchen, with a cooking island in the center, backed by a realistic wall with French doors, a door to elsewhere in the house, and a hallway. There’s also a TV screen built into the upstage wall with the image of a microwave on it. But when the scene changes, a small army of time-consuming, rhythm-breaking, although very efficient stagehands enters to remove the furnishings (some slide into the upstage wall), while a few new props or furnishings are brought on. The walls, the hallway, the TV screen, and the doors remain, although the screen image is different. What was realistic in the first scene morphs into a mishmash of locales all using the same background. What’s needed here is a conceptual design—perhaps using projections—that abandons realism and employs simple abstractions to represent the different places, with the stagehands eliminated and the cast alone (they're currently integrated with the stagehands) choreographed to bring on all necessary furnishings.
The actors struggle to make their cartoonish characters believable but none succeed in overcoming the weak material. Casting the crucial role of 11-year-old Gabby with someone in her mid-20s is a big boo-boo, but even if the part were played by someone as gifted as a young Dakota Fanning WINNERS wouldn't deserve its name.
Posted by Samuel L. Leiter at 5:57 AM