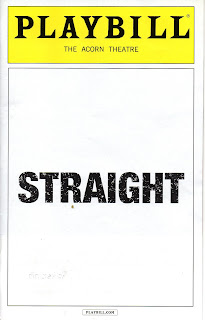 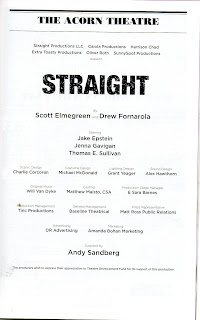 Nowadays, when you see a play title using the word “straight,” you can be pretty sure it’s about sexuality, not geometry. (See, for example, last season’s STRAIGHT WHITE MEN and the still-running SEX TIPS FOR STRAIGHT WOMEN FROM A GAY MAN.) In fact, nowadays, you can be pretty sure that almost every other play you see is about sexual identity. Scott Elmegreen and Drew Fornarola’s tolerably diverting STRAIGHT, adds yet another script to this growing library of Mars-Venus-and any gods in-between plays.
STRAIGHT mingles rom-com with bromance, bouncing around conventional comic dialogue with serious issues that tip it into dramedy territory. Using a not particularly original premise reminiscent of Noël Coward’s carefully closeted DESIGN FOR LIVING (1932), STRAIGHT is about the choice the sexually ambivalent investment banker Ben (Jake Epstein, blandly appealing) must make when he finds himself in love simultaneously with a woman, Emily (Jenna Gavigan, sweetly likeable), and a man, Chris (Thomas E. Sullivan, boyishly charming).

Everything happens in the Boston bachelor pad of the 26-year-old Ben. When the play opens, he and Chris, a nearly-21-year old, Boston College student, are watching sports on TV and drinking beer. They’re new acquaintances, the cool, more experienced younger dude having the edge in what’s about to transpire. Ben, in fact, has never done this kind of thing before. As intimacy beckons, a call from Emily (what would plays do without cell phones?) completes the setup. Later, we’ll learn she’s a 27-year-old, Harvard Ph.D. candidate in bioinformatics (a field related to genetics), and that she and Ben have been dating since they were at U-Penn (whose memorabilia provide prop and costume elements). She wants him to move in with her and can’t understand what’s holding him back.
The play shifts back and forth between scenes involving Ben and Emily and Ben and Chris, until, finally, there's a scene with all three after Emily enters when Chris and Ben are together; Ben struggles comically to cover the compromising situation, as in countless bedroom farces; the scene misfires both because of Ben's overdone attempts to deflect attention and Emily's obliviousness to what's right under her nose. Amusingly, Ben finds himself forced to leave Chris and Emily—who immediately like each other—alone together, which raises expectations since Chris, although less so than Ben, has had close encounters of the female kind.
Regardless of the comic byplay, STRAIGHT is really more concerned with how Ben--unable to fully accept being tagged as gay--works out his issues of attraction, even love, for Chris, while keeping his secret from Emily, whom he also loves, and who, for all her intelligence, remains perpetually (and unconvincingly) in the dark. In a sense, STRAIGHT is simply another cheating hearts play, with the twist being the same-sex angle. Ben, of course, must make a decision, for which we’re forced to wait patiently. Audiences will surely take sides about which partner he chooses, which may be the play’s most controversial aspect. My companion, a professor involved in LGBT issues, insisted—given Ben’s extended dilemma—the play is 15 years behind the times.
STRAIGHT occasionally veers off into didactic sidebars. One is a chatty discussion between the guys about the acceptance of homosexuals in society, such as you might hear on afternoon TV; it seems aimed more at informing the audience than at moving the dramatic needle. There’s also a bit about investment banking that sounds like a scene from THE BIG SHORT. And Emily’s specialty of bioinformatics allows her to say things like, “So I’m looking at the relevant loci in a sample group, and the idea is to try and isolate the chemical processes that link lifestyle factors with genetic predisposition.” This too-convenient way of introducing the nature-nurture debate surrounding sexual orientation merely emphasizes how contrived the writing often seems to be.
Charlie Corcoran’s generic apartment setting offers one more variation on how to decorate your living room/kitchen, Grant Yeager’s lighting is unobtrusive (although the lights could be taken down more during the scene transitions), and Michael McDonald has dressed the actors in convincing duds. Much of STRAIGHT is clichéd but Andy Samberg’s direction keeps it moving, there's some entertaining dialogue, the actors are engaging, there’s a lot of smooching and underwear displaying, and, best of all, it's over in an intermissionless 85 minutes.