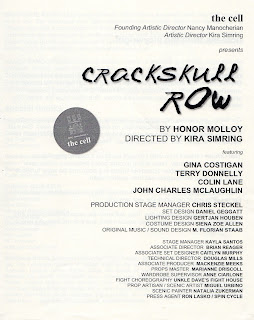 It’s May Eve 1999 and we’re in a sleazy hovel somewhere in Dublin, on a street that gives its name to Honor Molloy’s play at the cell, Crackskull Row, part of this year’s Origin’s 1st Irish Festival. Living in this “shitheap,” as Molloy calls it, is an aging, scuzzy hag called Masher Moorigan (Terry Donnelly), surrounded by filth-encrusted, paint and plaster-peeling, rust- and soot-embedded walls (designed by Daniel Geggatt). Her food is rotting and wormy, and the utilities have been shut down. She’s mostly confined to a crummy leather couch, in whose cruddy crevices she keeps her basic necessities, because of varicose-veined, bandage-wrapped legs that hinder her mobility.
May Eve (April 30) is a sort of Celtic Halloween when, as a program note says, “the veil between then and now, the living and the dead, is slim.” Although it’s sometimes hard to tell who’s living and who’s dead in this morosely murky drama, or even who’s who, our first glimpse into the creepy world Molloy is creating comes when a strange young woman called Wee Dolly (Gina Costigan) emerges from the grimy fireplace to care for the nagging hag. Over the course of ten scenes, half set in 1999, the other half flashbacks set in 1966, the play introduces two (or is it three?) more characters, Masher’s shoeless, 16-year-old son, Rasher (John Charles McLaughlin), and her loutish, physically abusive husband, a vagabond singer named Basher (Colin Lane).
Crackskull Row tortuously works its way back and forth through its tale of the poverty, debt, and squalor Masher wallows in after Basher’s gone: she undergoes electroshock therapy; experiences both professional and familial promiscuity (“Never claimed I was Madame Morals”); and lives an existence clouded by scary visions, ghostly visits, and symbols of violence until the bloody acts that brought everything crashing down in 1966 are confronted on the Irish equivalent of Walpurgis Night.
The actor playing Basher also gets to play Rasher at another point in his life; the actress playing Wee Dolly, whose identity eventually becomes clear, takes on Masher when she was younger and called Dolly; and the actor playing Rasher assumes the role of a repairman from the ESB (Electricity Supply Board) whose existence may reasonably be questioned: you can be excused for feeling confused.
Molloy’s language may occasionally prove as baffling as her plotting; written in a dense Dublin Irish patois filled with vulgarities, malapropisms, mispronunciations, puns, and all sorts of colorfully imaginative expressions, all spoken in accents as thick as the grunge on the walls, it privileges atmosphere over clarity, sometimes sounding like Conor McPherson on a wee hours pub crawl. One of the more memorable, listener-friendly passages comes when Masher describes a bout of sex with Basher: “Last night. He tried to get up on me. Pushing in with his membrum regnum. That’s his name for it. Mem-bah-rumm. Ray gun. Zap-zap. /But hah-bloody-hah on him. King Flop. Rats, if I didn’t say—‘Aren’t you the soft one, Basher Moorigan?’”
Energetically directed by Kira Simring, albeit with a bit too much shouting, the ensemble makes the most of the limited acting space, atmospherically hued by lighting designer Gertjan Houben. Siena Zoe Allen’s shabby costumes practically reek, and M. Florian Staab enhances the mood with his original music and sound design. Donnelly’s Masher is the standout performance, although she’d look even more believably haggard without any makeup. Lane is effective as Basher but his words sometimes come more thickly than trippingly off his tongue, while both Costigan and McLaughlin do quality work as the younger characters.

Judging by its vagueness the play might as easily have been called Scratchskull Row; still, bits and pieces of its dramatic detritus are definitely worth salvaging.