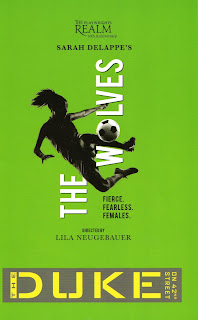 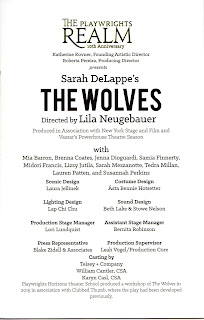 Let’s get the title of Sarah DeLappe’s fine new play out of the way first. The Wolves is the name of a teenage girls’ soccer team somewhere in suburban Middle America (a location itself gently mocked in the text). The girls, though, are a generic group of young athletes, with nothing especially wolfish about them; if one had to locate their personalities on the animal spectrum the needle would stop, perhaps, somewhere in the feline vicinity.

There are nine players involved, rather short of the number one would need to field a team while keeping alternates on the bench; otherwise, there’s a great deal of veracity in the atmosphere built up by DeLappe and her imaginative director, Lila Neugebauer, who take us inside an air dome where we watch the team over a period of months as they warm up for their weekly games. A couple of times, late in the play, one or two character names are mentioned, but those we mostly hear are of people who never appear; even in the program, the characters are identified not by their names but by the numbers on their green uniforms with white piping. (Wisely, each actor’s program bio is accompanied by a headshot.)
Things happen over the course of a season—including physical injuries, an eating disorder, a scouting visit, and a tragedy—during the episodic play’s intermissionless 90 minutes but the play is mainly concerned with letting us get to know the young women, little by little, as they chatter, gossip, bitch, argue, and compete. There’s no question, though, about their fierce determination and devotion to the team. A principal thread concerns a new girl, #46 (Tedra Millan), whose modest reticence hides exceptional soccer skills that lead to a rivalry with the most profane, outspoken player, #7 (Brenna Coates), the striker. She represents the difficulties some kids face when assimilating with a new group. A few good laughs are generated when one of the girls suggests that #46 lives in a yogurt; you’ll have to see the play to learn why.

Much of this happens as the team runs through its stretching and exercise drills under the eye of their highly focused captain, #25 (Lauren Patten); various male coaches are mentioned—often disparagingly--but none ever show up. DeLappe has considerable soccer playing experience but director Neugebauer has much more, and she’s very successfully drilled her athletic young actresses, whose characters are supposed to be 16, in many of the routines used in actual soccer workouts, including bits where the ball gets kicked around. #46 does some especially tricky business that must have taken hours to master.

With the audience seated in bleachers on wooden folding chairs on either side of a wide expanse of AstroTurf that continues to rise vertically out of sight at one end (setting by Laura Jellinek), you definitely get the feel of being a fly on the wall listening in to the casual conversation of garrulous teenagers. DeLappe's great strength is in capturing with remarkable accuracy the expressions, rhythms, and inflections of teenage girls, as well as their preoccupations with the trivialities of menstruation, boys, and other essentials of immediate post-pubescence. She also conveys how some, even if their knowledge is shaky (one girl can barely pronounce Khmer Rouge), are concerned with issues they’re confronting in school, like genocide and immigration, although these topical sidebars are more like conversational passes than goal-seeking kicks.

The play begins with the girls spread out in a circle for stretching work and prattling in such a cacophony of words it’s difficult to follow any particular line of thought; this is, of course, all expertly orchestrated so that gradually you’re able to focus on particular characters and exchanges. The great energy that courses through the play, however, is eventually toned down as the characters, after the developments of the year, ultimately have to deal with issues deeper than winning games.
Near the end, an unexpected visitor arrives in the person of a soccer mom, touchingly played by Mia Barron, to cheer on the team (and to offer a brief disquisition on annoying teenage locutions and intonations). Given the circumstances, you may have a hard time preventing a droplet from trickling down your cheek.

As with a well-drilled soccer team, everyone in the ensemble contributes to the excellence of the production. There are expert contributions from costumer Àsta Bennie Hotsetter, lighting designer Lap Chi Chū, and, especially, sound designers Beth Lake and Stowe Nelson, with their pop music choices and inter-scene crowd effects.
The Wolves, which won the American Playwriting Foundation’s Inaugural Award, and was a finalist for two other important awards, is the first produced play by DeLappe, an MFA student at Brooklyn College (yay!). It’s another feather in the cap for The Playwrights Realm, whose best recent offerings include The Red-Handed Otter and My Mañana Comes. Both playwright and production company have scored a goal with this engaging piece of theatre.