“That’s Why the Lady Was a Cop” 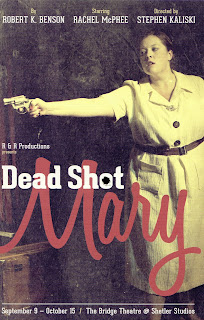 Biographical solo plays are often great ways to learn about the lives of fascinating people, not only famous ones like Charles Dickens, Louis Armstrong, Mark Twain, Leonard Bernstein, etc., but less well-known ones, like Mary Shanley, a.k.a. Dead Shot Mary, an exceptionally successful New York City policewoman with a great story to tell. Born in Ireland in 1896, Mary joined the NYPD in 1931 and, over the next two decades (she retired in 1957), working undercover, eventually racked up over 1,000 arrests of illegal fortune-tellers, pickpockets, shoplifters, purse-snatchers, and the like. She was the fourth woman to be promoted to Detective First-Grade, the New York Times wrote 11 stories about her, and in 2006, a documentary called Sleuthing Mary Shanley was released.

In Robert K. Benson’s Dead Shot Mary, presented under Stephen Kaliski’s brisk direction at the Bridge Theatre @ Shetler Studios in a tiny venue seating around 25 people, actress Rachel McPthee does a fine job of channeling Mary, whose slightly faded photos (including one with Mayor LaGuardia) hang on a simple background of picture frame-like latticework; the set, designed by Kyu Shin, contains artifacts from Mary’s life, as well as a tailor’s dummy dressed in a policewoman’s jacket and badge. McPhee--costumed by designer Peri Grabin Leong in replicas of the matronly yet fashionable white dress and round, straw bonnet she wears in most of those pictures--offers a rather accurate image of the hefty, courageous, red-haired lady cop.

The piece, presumably being told at the time of Mary's retirement to Florida, is framed with scenes of Mary on a bus that morph into Mary at home, talking to her unseen dog, Jigs. With period jazz occasionally heard in the background (sound design: Adam Salberg), Mary recounts why she joined the force (the good pay and excitement), which only began hiring women during World War I; speaks of her shooting skills (her pistol gets valuable stage time); reveals her disappointment at being assigned to undercover; discusses her policing methods and selected arrests; informs us of the importance to a lady cop of being fashion conscious; recalls being commended by LaGuardia; and lets us know that, while no "women's libber" (an anachronistic usage here), she resents what she does being modified by references to her sex.
But the play is equally focused on expressing Mary’s inner life, and her difficulty in finding her true face within her public and private ones, as reflected in a lengthy radio broadcast (unconvincingly rendered) of a boxing match, intended to express her resilience; passages recounting her Irish Catholic upbringing and her subsequent problems with confession; her fondness for Billie Holliday; and, inevitably, her battle with the bottle, which leads to a scandalous barroom incident that nearly costs Mary her job.
These latter scenes are the least interesting because, well-intentioned as they are, what many of us want to know about this unusual individual are not speculations about her unsurprising inner life but what the daily life of someone in her position was like; what her relations were with other cops; what impact she had on the lives of others (including her family), and similar things related to her remarkable career. Perhaps her more personal issues could have been better integrated with her professional ones; at present, they seem a slight distraction.
That said, McPhee’s robust performance works best when she portrays Mary’s emotional and psychological vulnerabilities and talks to us, not at us; she’s certainly got the stuff to embody Mary’s iron handedness, but she works too hard at it, pushing the toughness and affecting the kind of stagey Nu Yawk accent you learn from dialect books, sprinkling her lines with a blizzard of “youses,” “poils,” “goils,” and “poises.” Occasionally, Mary seems less an organic creation than a costume McPhee’s put on, allowing technique to dominate honesty; as the show continues I'm sure she's going to improve. I certainly wouldn’t want to be caught in this pistol-packing momma's crossfire.