“Grin and Bear It” 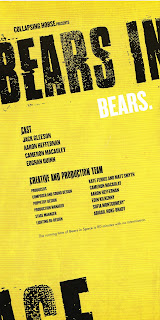 It was a slow theatergoing summer so I used much of my newfound time to binge watch all 60 episodes of the astonishing HBO series Game of Thrones, which I’d never seen before. I was thus revved up to see one of its principal players, Jack Gleeson, the interesting young actor who plays the deliciously evil King Joffrey Baratheon (killed off in season 4), in Irish writer Eoghan Quinn’s silly piece of ursine juvenilia, Bears in Space. The show is now at 59E59 Theaters after sold-out runs in Dublin, Edinburgh, and London that have given it a cult-like status.


Although he gets to do the wicked ruler thing again, among his other roles in this 80-minute nonsensical farrago produced by the Irish company Collapsing Horse, Gleeson turns out to have considerable comedic talent. Unfortunately, the play he’s in, while prompting many gusts of laughter, only rarely cracked my stone face (or those of certain others I was able to observe.)

It’s not advertised as such, but Bears in Space, produced as part of the annual 1st Irish Festival, resembles the kind of collaborative work usually labeled “devised theatre,” which director Dan Colley’s bio cites as one of his strengths. There’s a “found” quality to everything, from the makeshift scenic units and shabby costumes to the tattered rod puppets (designed by Aaron Heffernan) the actors use to play most of the characters. The bizarre situations and jokey dialogue (with comic accents, puns, unexpected metaphors, and the like) seem the kind of thing a band of freewheeling young actors might have created during a series of improv-based workshops (the script actually has places where actors are asked to “riff”); it’s a bit like the mayhem of the early Marx Brothers but absent anyone having anything like those guys’ distinctive personalities.
The premise is that a Story Keeper (Cameron Macauley), whose favorite author is Jane Austen, has chosen (from his “infinitely large library”) to tell us the story of the SS Quickfast, an interstellar spaceship whose crew of three, all bears, have been in cryogenic hibernation for 700 years (“That’s a long nap,” one notes). Using crude puppets, the story is enacted by the Story Keeper’s three moronic sons, Bertram, Darcey, and Lady Susan Vernon, each named for an Austen character. (The sons are Gleeson, Aaron Heffernan, and the playwright, Eoghan Quinn; the program doesn’t list which roles they play in the story.)

Two crew members, Officer Volyova, a Scot, and Officer Bhourghash, a Russian rescued in space by the Quickfast, wake up one day in 300,000. The other, Captain Lazara, remains frozen because she’s got a fatal disease that has spread through the Seven Sectors and is in need of a cure; to unfreeze her now would risk further spreading the disease. Volyova is desperately in love with her. Meanwhile, a lonely, bumbling Hal-like computer (Gleeson, if you want to know) reports that the ship is running low on energy.

The captainless crew is invited to a party at the Social Club of the city-planet Metrotopia by its wicked, communistic mayor, Premier Nico (Gleeson, of course); Bhourghash goes, pretending to be the captain so he can get energy for the ship, but is in danger because Nico seeks to imprison undesirables on “The Jungle Planet of Jungolia.” This takes us further and further into the muddy whirlpool of a childish fantasy, with nutty, off-the-wall characters, that snatches every opportunity to make fun of itself, but fails to make any meaningful commentary on the equally crazy world we live in. Fun for fun's sake, you might call it.
It’s all well done, the actors are expert comedians and puppeteers, and there are effective shadow projections and Macauley’s amusing music, so, if you’re up for this kind of prankish theatre, Bears in Space may prove a pleasant enough diversion. Moreover, surprisingly for this kind of show, it doesn’t depend on smut for its laughs. I generally love nutty stuff like this but Bears in Space hit my funnybone so infrequently all I could do was grin and bear it.