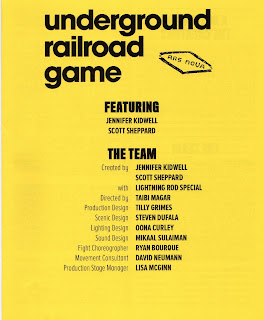 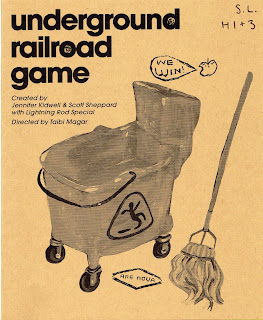 There was a lot of “breaking news” on TV last week, including a major federal corruption investigation concerning Gov. Cuomo’s top aides, the New York bombing, and just about everything concerning the presidential race. However, sucking up just as much air time was what was happening in Charlotte after another police shooting of an African-American citizen. Coupled with a presidential candidate declaring that he’s in favor of reinstating racial profiling as an acceptable police practice, the Charlotte (and Tulsa) events make it clear how ludicrous is the notion that America is “post-racial."


Thankfully, there are theatre artists seeking insightful, innovative ways to rub our faces in the subject of our racial attitudes and make us think, feel, and laugh about them. A good example is the avant-gardish, often funny, two-character Underground Railroad Game, devised by and starring African-American actress Jennifer Kidwell, and white actor Scott Sheppard. Cleverly directed by Taibi Magar, it boasts a “production design” (which I’m assuming means costumes) by Tilly Grimes, scenic design by Steven Dufala, lighting by Oona Curley, and sound by Mikaal Sulaiman, all of them excellent. A production of Lightning Rod Special company of Philadelphia, where it premiered, it’s now at the adventurous Ars Nova.
I admit upfront that I don’t especially favor some of the methods Kidwell and Sheppard employ in their 70-minute examination of American racism and the legacy of  slavery, but it can’t be denied that they’ve found a provocatively original way to bring their subject to the table. The play’s premise was inspired by Sheppard’s own experience as a fifth-grader in Hanover, PA, a town near Gettysburg, just above the Mason-Dixon line. Hanover played a role in the Civil War system of helping runaway slaves, called the Underground Railroad (au courant in books like Colson Whitehead’s eponymous novel, the just-opened Off-Broadway play Nat Turner in Jerusalem, and the forthcoming movie, Birth of a Nation).

The teachers at Sheppard’s school, using immersive techniques designed to excite the students about learning by getting them personally involved in the escape-from-slavery story, divided the mostly white students into two groups: one represented Union soldiers, the other Confederates. The game involved the Union soldiers trying to smuggle to “Canada” dolls representing the slaves, while the Confederates’ were assigned the task of recapturing the runaways. A point system was used to determine who won the war.
In Kidwell and Sheppard’s play, the Underground Railroad Game is led by Teacher Caroline and Teacher Stuart (who sometimes seem to be Kidwell and Sheppard themselves), she wearing a Union general’s blue hat and he a rebel general’s gray one; with the teachers using direct address, the audience is treated as if it were a class of Hanover fifth graders to whom they speak with precisely the right patronizingly pedagogic tone; when a problematic word is spoken, an actor holds up two fingers to “quote” it as the other offers a definition. The meaning of words plays a significant part in the thematic substructure. Irony pervades the dialogue, like the comment that the Underground Railroad was slavery’s “silver lining.”
But we don’t get to this point until after the melodramatic scene that opens the play when a Quaker farmer saves a runaway slave hiding in his barn. Following this they reveal themselves as the teachers and instruct us in the fundamentals of the game we’re about to play. (I’m happy to report that audience participation is minimal and anonymous.) Each audience member is provided with a tiny toy soldier, either blue or gray, placed under their seat (my companion and I were sadly overlooked), these signifying which side of the war they’re on.
Transitions from one level of reality to another, and from the fantasized past to the present and back again, occur throughout, intended as lessons directed more toward us as adults than as children; the scenes alternate between the everyday world of the classroom (including cheers for the school team) to a mélange of scenes in which Stuart and Caroline employ a range of theatricalist techniques—including a romantic pas de deux (choreographed by David Neumann) straight out of a 50s Hollywood movie—to satirize our subliminal racial antipathies, even among lovers. The evolving personal relationship of Caroline and Stuart, who become both romantic partners and antagonists, introduces acts of sex and violence, inextricably tied to one another and taken to be essential aspects of our race-related behavior.
This brings into play situations involving gender and power that some may find uncomfortable, such as when Stuart sucks the bare breast of Caroline, costumed and lit in profile to resemble a large, iconic, Mammy-like house slave, or when Stuart, treated by the dominatrix-like Caroline as a slave, is forced to strip naked and stand facing the audience for a long time as she abuses him with a ruler. (Press kits include both a ruler and a pack of gum. I get the ruler, but the chicklets?  “Chew on this!” I guess.)
There’s no question that such button-pushing situations help underline thematic ideas; however, it’s fair to wonder just what the audience is receiving. For example, the naked man certainly makes us more aware of what slaves in auction rooms endured, with an ironic take on the power dynamic, but is that what most people are thinking as a male actor continues to stand totally exposed only a few feet from their faces?
Underground Railroad Game is filled with artistic and intellectual conundrums; you may even leave the theatre asking your companion, “Now what was that all about?” But, while watching, its preoccupations, even if not easy to articulate, are likely to seep into your consciousness and stay with you after you get home.
OTHER VIEWPOINTS:
Show-Score