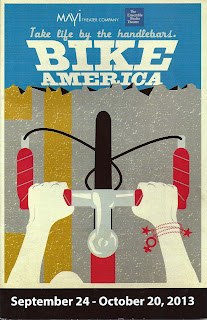 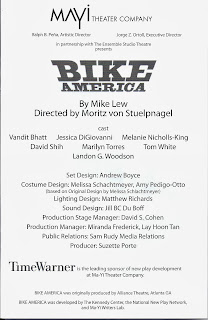 How do you stage a roller derby or a cross-country bicycle ride on a small proscenium stage with a low budget? Last winter, a play called THE JAMMER, at the Atlantic Theatre Company’s Stage II, answered the first part of the question, and right now, the Ma-Yi Theater Company is showing how to do the latter. The play is Mike Lew’s mildly engaging BIKE AMERICA at the Theatre at St. Clements, creatively staged by Moritz von Suelpnagel, with strong support from set designer Andrew Boyce, lighting designer, Matthew Richards, sound design by the ubiquitous Jill BC Du Boff, and costumes by Melissa Schachtmeyer and Amy Pedigo-Otto. I mention the creative team first because much of the pleasure of the performance comes from their visual and auditory contributions. 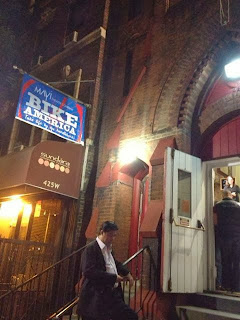 
BIKE AMERICA, which won the Alliance Theatre of Atlanta’s Kendeda Graduate Playwriting Competition, and was originally staged at the Alliance with most of the current cast, presents the story of Penny (Jennifer DiGiovanni), an attractive 27-year-old graduate student from Boston, who refers to herself as a “fuck-up,” and who decides, only days before it is to begin, to join a three-month, 4,000-mile Bike America trip across America to raise money for cancer. Whereas a jaunt like this requires extensive training, she is so clueless that her entire training regimen is four days at the gym on a stationary bike. Todd (Vandit Bhatt), the shlumpy guy who loves her but to whom she refuses to commit, is casually brushed off as she ventures forth on her ill thought-out adventure with five other bikers and the Man with the Van (David Shih); the latter is a bearded, bandanna-wearing dude who follows along to handle roadside (and, it turns out, personal) emergencies.


We take it as a dramatic liberty that there are so few members of the bike tour, so the playwright can concentrate on Penny and a manageable number of fellow bikers; they include the trip leader, the gung-ho Ryan (Tom White); a lesbian married couple, Rorie (Melanie Nicholls-King) and Annabel (Marilyn Torres), one African-American and the other Hispanic; and an African-American guy, Tim Billy (Landon G. Woodson). Aside from learning that Rorie and Annabel intend to have a marriage ceremony in every state they pass through, we get barely any back story on these characters, not even on Penny, whose journey is the backbone of the play.


Mr. Lew has crafted an American Odyssey seen through the eyes of Penny, who begins the play by telling us that she's going on the trip to find herself, a purpose that remains consistent as the bikers continue to confront new experiences. She also tells us early on that she will be dead by the end of the play, which casts something of a pall over the ensuing behavior of the others, no matter how raucously they carry on. Penny views each city they visit in shallow, stereotypical terms and imagines what it would be like for her to live there, but her imagination is limited; complaining about not wanting to be pinned down, she keeps striving to find out who she is as she shops the country to see where she fits into the American landscape. Todd, unwilling to give her up, no matter how cruelly she dismisses him in their phone conversations, somehow tracks Penny down and arrives on a Razor scooter (as with much else here, you have to suspend your disbelief), but has little success in getting a commitment out of her. Finally, unable to bond with the others, although she’s had sexual encounters of a sort with Ryan and Tim Billy, she takes off alone across the starry Arizona landscape. Here the play shifts gears sharply and bogs down in "serious" conversation when the Man with the Van follows her, helps her fix a flat, and offers sage advice (with lots of talk about Millenials and Gen Xers); she, though, true to form, refuses to accept. Off she goes again until . . . well, there’s a startling moment combining lights and sound that tells you how poor Penny ends up as flat as her name.


Mr. Lew’s episodic structure allows for passage through or layovers  in different cities along the nation’s highways (including Newport, Brooklyn, Allentown, Pittsburgh, Louisville, Ohio --city unspecified, Jackson, New Orleans, Austin, and Flagstaff), most of them spoofed heavy-handedly.  The play is mostly a sequence of not notably dramatic events displaying the ups and downs of the group’s mutually developing relationships, as well as some interplay with various locals who allow them to crash at their homes or establishments. Although Mr. Yee’s dialogue is often entertaining, the characters are too broadly drawn to be credible. The play often seems to be going on its own trip in search of its own purpose.


Most problematic is Penny, whose self-centeredness, selfishness, and narcissism become increasingly annoying, even though Ms. DiGiovanni does an excellent job of playing as many notes on the role as she can manage. Sometimes manic, sometimes depressed, sometimes super-enthusiastic, sometimes cocky, sometimes cynical, her range of physical and facial expressions is effective; although her Penny is hard to embrace, you do feel the frustration of seeing a rootless but promising person ignoring their own virtues in search of something that doesn’t exist. When she meets her maker on that lonely Arizona stretch, we want to scream, “You stupid jerk. Why wouldn’t you listen to anyone!”


The cast is capable but is too often directed to shout at the tops of their lungs, as if to work off all the energy they’ve built up for their trek. The characters generally come off as cartoons, not people, a defect even more noticeable when the actors take the roles of local citizens offering (or denying) help or advice.


BIKE AMERICA is set on an open stage within several false prosceniums, painted blue, receding from the auditorium, with a pale vista of mountains painted on a backdrop. A broken yellow highway line divides the stage at center. Panels slide on, mostly with blow up photos, to indicate specific places. As for the biking, when we need to see Penny actually peddling, she uses a stationary bike, but when the group is cycling together everyone uses a single wheel fitted with handlebars. These are not unicycles, so the actors have to manipulate the wheels as if they were actually riding bikes, and director von Stuelpnagel has created some effective choreography for when riders move forward, fall back, or proceed in different configurations. There's a finely done moment when the bikers struggle uphill, fly down a switchback, and rattle along over gravel. Excellent sound effects interrupt the action, such as the roar of cars and trucks whizzing by, and, in the New Jersey scene, the nasty wisecracks of truckers.


In general, the tone is comic, even farcical, but the knowledge of Penny’s fate and the increasing desperation she reveals, especially in the quieter scenes, establish an edge that introduces darker tones. The blend of excessively sophomoric humor with Penny’s personal tragedy makes for an uncomfortable mix; it undercuts the seriousness of her dilemma so that, even with our foreknowledge of her fate, when the moment comes, it seems weirdly out of place.


The Ma-YI Theater Company’s goal is to support Asian-American artists, but apart from the playwright and two actors (neither of whom was in the Alliance production), there’s nothing specifically Asian-American about BIKE AMERICA. It’s a play about American youth, regardless of ethnicity, and the difficulty they (or some of them) face in finding their place in the world. For all its talk about this or that generation, there’s nothing here that couldn’t reflect any previous generation of disaffected young people. Penny never articulates what in particular is bugging her, other than her own sense of disconnection. This is far from new, of course. It is, and always has been, part of the human condition.

BIKE AMERICA makes some amusing stops along its way, but the ride is a little too bumpy for my tastes.
Posted by Samuel L. Leiter at 7:41 PM