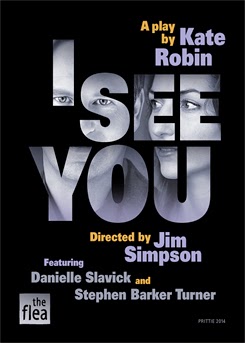 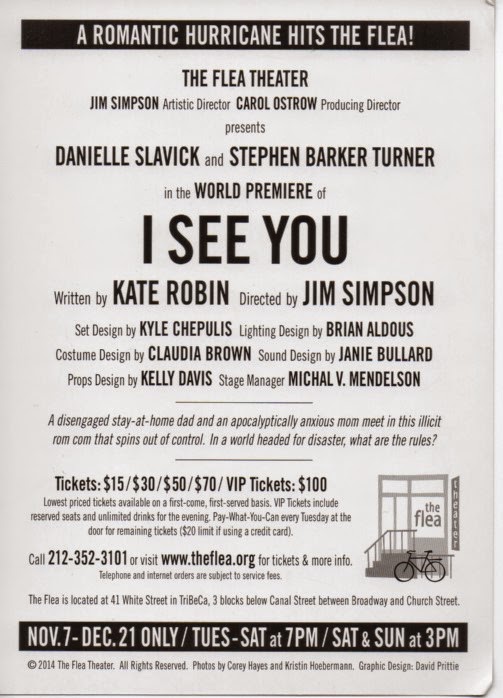 It’s often said about the art of stage directing that it works best when most concealed. Of course, this isn’t always true; some directors, like Julie Taymor, for example, are known for their conceptual brilliance and audiences often go to see something more because of a particular director’s take on it than for the work itself. But, for the most part, especially in realistic plays, directors best serve their work by not drawing attention to themselves. This, I’m afraid, isn’t the case with Jim Simpson’s staging of Kate Robin’s I SEE YOU, at the Flea Theater, where Mr. Simpson has made this one-act, 90-minute, two-character “romcom,” as it’s being called, into a showcase for directorial ingenuity.

Ms. Robin (a writer and co-executive producer of HBO’s “The Affair”) has written a straightforward play about Nina (Danielle Slavick) and Jesse (Stephen Barker Turner), thirtyish New Yorkers, married to others, who meet one day at the Children’s Museum while their tots are playing in a “Ball Pool.” She’s a blocked writer (of memoirs), he a laid off teacher and stay-at-home dad whose avocation is making movable sculptures. Mainly because of the garrulous Nina’s aggressive friendliness toward the soft-spoken Jesse, which evolves into what some might consider a moderate form of stalking, they gradually slide into a romantic embrace as they huddle in a blackout at a Zen meditation center on Spring Street during what, though unnamed, is surely Hurricane Sandy. Nina and Jesse both express relative complacency with their current marital/familial statuses while also revealing deep underlying dissatisfaction. Their brief physical encounter leads to radical changes in their individual outlooks, but that doesn’t mean their altered conditions will lead to mutual happiness.

Until her character’s loquaciousness grows annoying, Ms. Slavick creates an amusingly quirky picture of Nina as a self-involved New York mom, obsessively preoccupied with all the currently trendy issues related to the ecology, nutrition, poultry raising, depression, Botox, child raising, wireless radiation, shellfish allergies, corporate greed, religion, and, among other little things, the future of the human race. Of course, Nina doesn’t fail to vent about the modern world’s immersion in social media to the exclusion of human contact, and there’s a bit too much would-be humor at the expense of gluten, another overused satirical target. A lot of this is interesting, of course, like reading a digest version of the Science Times, but you sometimes want to ask, “Hey, folks, is this a conversation or a play?”

Nina’s chatter goes on and on and gradually chips away at Jesse’s reserve (he’s always looking at his phone), until he starts to respond with his own takes on her nonstop commentary. Why she chooses him as the recipient of her accumulated wisdom, and why he finds himself drawn to her are questions I can’t answer, but, pretty as Ms. Slavick is, Nina’s someone I’d probably find myself running from, not toward.

The writing and performances are realistic, the structure is episodic, and the locales—the museum, a hospital’s ICU ward, Nina’s home, the meditation center, Jesse’s home, and a room where one takes kids to engage with wall projections—are unexceptional (except, perhaps, the last). For its performance, Kyle Chepulis has designed an open space backed by translucent curtains, with a long wooden bench placed on an off-white floor into which is built a motorized revolve. Bare stage, background curtains, bench, two actors: add connective mood music, cool clothes (by  Claudia Brown), and smart lighting (by Brian Aldous) and what more do you need?

Do you really need two attractive young men (John Paul Harkins and Alexander Kushi-Willis) dressed in black with cowl neck sweaters to be choreographed into the action, where they’re frequently quite visible, to hand the actors their props, like kurogo in a kabuki play? Must they carry little black boxes that light up to spell out the locale of the following scene? Does the accompanying piano music (Janie Bullard is the sound designer) have to be so overwhelmingly portentous? Do we have to watch the actors sitting endlessly in place, bathed in atmospheric light, before the action begins? Does the blackout scene, played only in candlelight so that we can barely see the actors’ faces, have to go on so long that we’re tempted to sneak in a nap before the lights return? And is an expensive revolve for a sceneryless set absolutely necessary?

Ms. Robin’s play has a scene in a hospital’s Intensive Care Unit, where Jesse’s child is rushed after having an allergic reaction to eating shrimp. Perhaps that scene inspired director Simpson to believe I SEE YOU needed an ICU of his own. Or perhaps not.