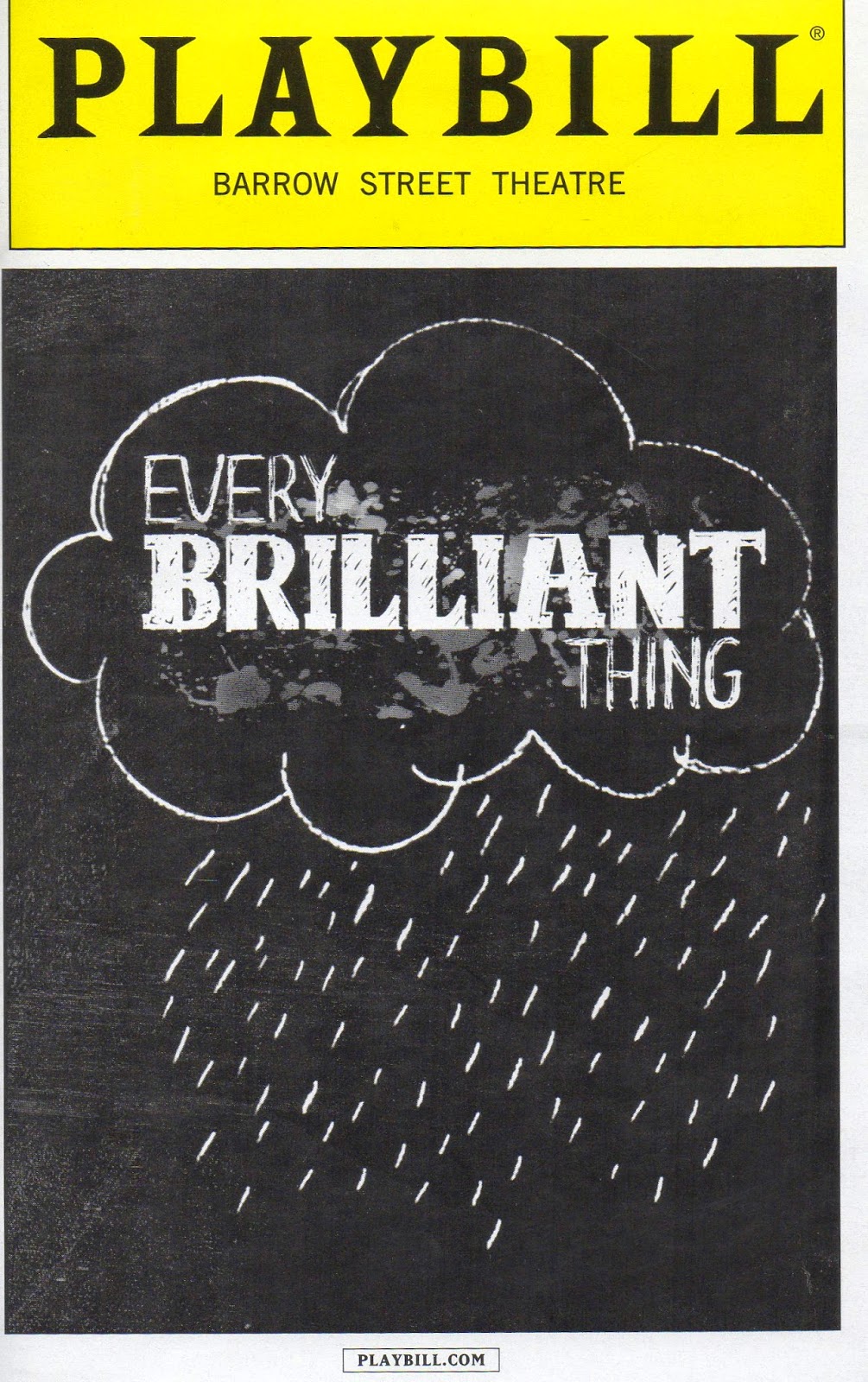 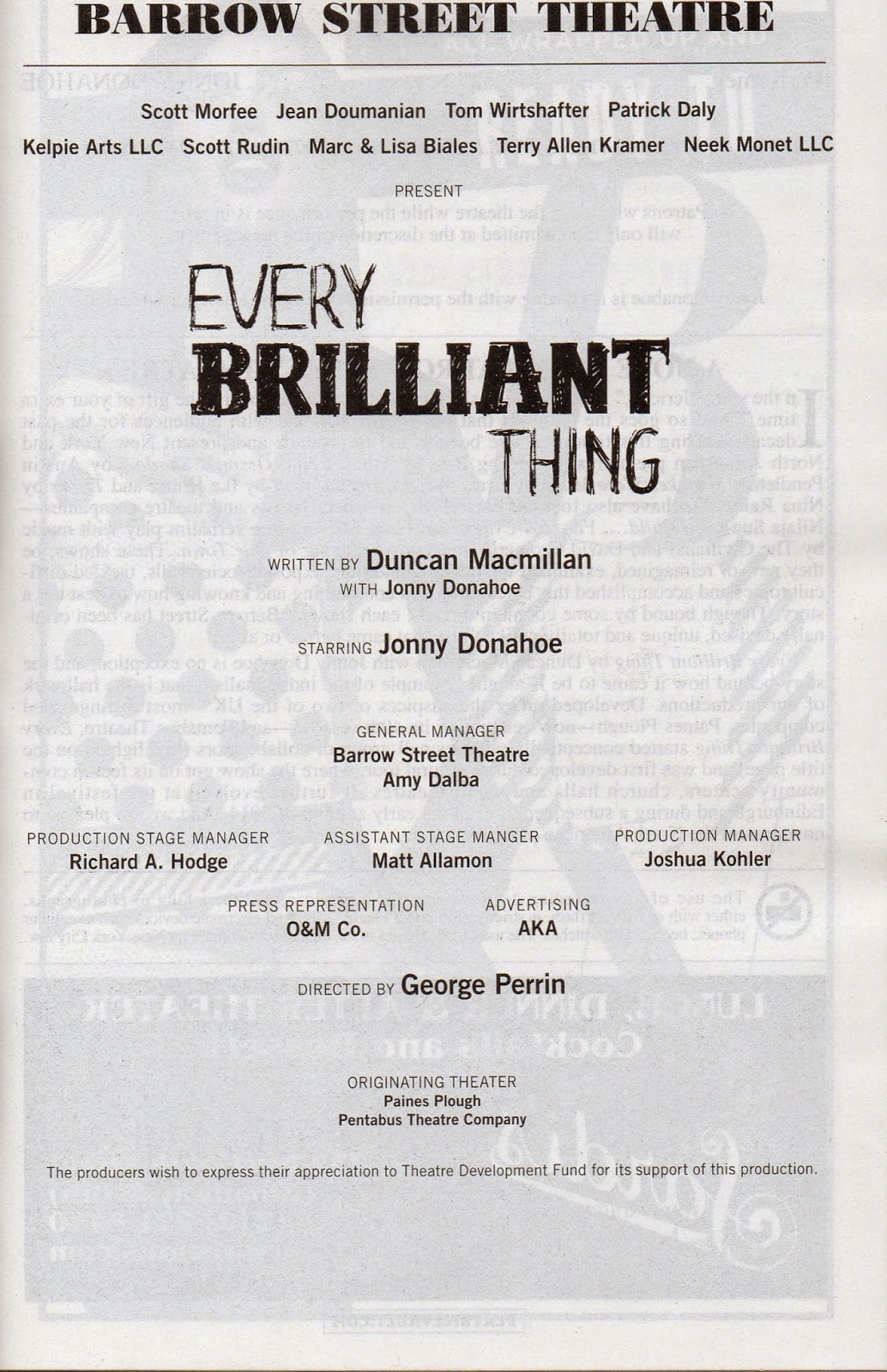 The night I saw EVERY BRILLIANT THING, a fire at the West 4th Street station made getting to and from the theatre on the subway a major hassle, but, as Ella Fitzgerald and the Ink Spots sing at the end of the show, “Into Each Life SomeRain Must Fall.” If I were to compile a list of 1 million brilliant things that make life worth living, that song might make it, and maybe it’s even on the list put together by the protagonist of this very satisfying one-man show at the Barrow Street Theatre. Our anonymous hero, the Narrator, you see, learns at age seven that his beloved mother, a victim of depression, has attempted suicide by doing what his dad calls “something stupid.” Thereupon, hoping to make her feel better, he decides to write down a list of every brilliant (i.e., wonderful) thing he can think of, and show it to her when she’s released from the hospital.

As he narrates his story, he grows up, talks of yet another suicide attempt by his mom during his teen years, and tells of falling in love at university, getting married, and breaking up. He, too, becomes a victim of depression, which he seeks help to combat. The subject of suicide, which becomes a preoccupation for him, provides an especially memorable extended sequence. He rediscovers the list, which, with the contributions of friends, has reached over 800,000 items, and continues adding to it until it reaches 1 million, finding in it the reasons to survive. The song may talk about rain falling into each person’s life, and that “too much is falling in mine,” but it’s clear that the setbacks we encounter shouldn’t prevent us from appreciating every brilliant thing life has to offer.

This sweetly sentimental, wise, and often very funny one-hour piece, which originated in the U.K. and was a hit at the Edinburgh Fringe Festival, is performed by Jonny Donahoe, a chubby, cheerful, delightfully upbeat fellow with close-cropped blonde hair. It’s presented in such an ingratiatingly natural manner that it appears to be autobiographical. It was, however, written by someone else, Duncan Macmillan. Mr. Donahoe’s participation in the writing is noted in the program by his name being printed in a much smaller font than Mr. Macmillan’s.

The auditorium, which is also being used these days for the shadow puppet play, SWAMP JUICE, is arranged in a theatre-in-the-round configuration, including seats on the raised stage. When the audience arrives, Mr. Donahoe distributes Post-its, notebook pages, and other scraps of paper, each with a numbered “brilliant thing” scribbled on it. At numerous points in his narrative, he calls out these numbers and whoever has the corresponding paper reads out what’s written there. Mine was #14 and said “bed.” Others include “Kung Fu movies,” “Laughing so loud you shoot milk out your nose,” “Me,” “Marlon Brando,” and both Christopher Walken’s voice and hair.  Moreover, several audience members are recruited to perform partly improvised scenes with Mr. Donahoe; they play a veterinarian, the Narrator's dad, a grade school counselor who speaks through a sock puppet, the Narrator’s lover (sometimes played by a man, sometimes a woman), and a university lecturer. Those chosen to participate at the performance I attended, despite their apparent shyness, turned in adorably appropriate performances.

Mr. Donahoe, as directed by George Perrin, works the audience like a stand-up comic, moving about freely among the chairs, sometimes with a mic in hand, and now and then cueing the sound technician to play pop and jazz segments--including Billie Holiday, Ray Charles, and Ella Fitzgerald--from the speaker’s father’s vinyl collection. The familiar music, touching premise, and Mr. Donahoe’s winning personality combine to create an hour of theatre that, in spite of its look at depression and suicide, manages in its life-affirming optimism to be both humorous and moving, while steering clear of undue schmaltziness. Many may consider it yet another of life’s many brilliant things.