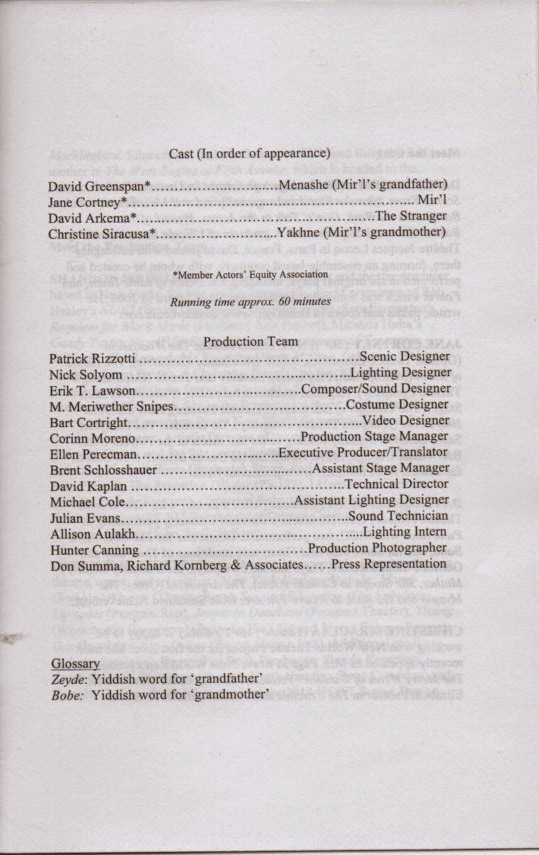 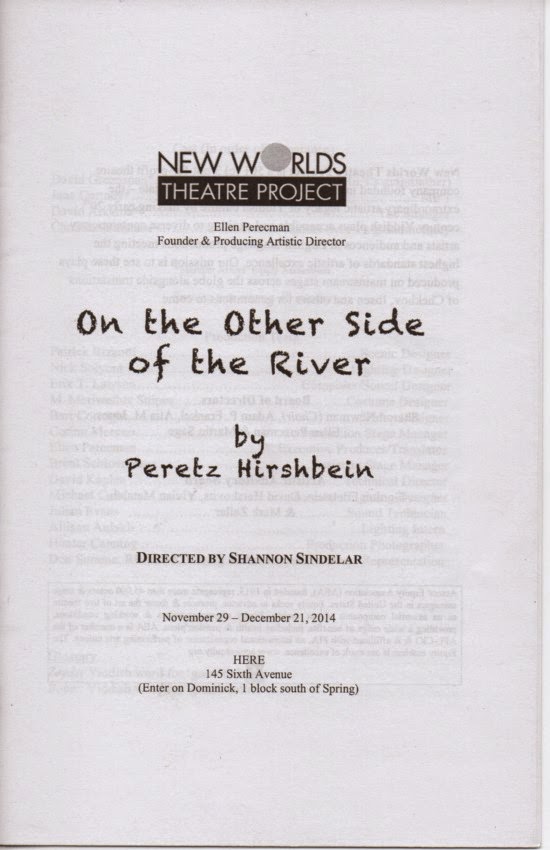 Peretz Hirshbein (1880-1948), born in Grodno, Russia, and known as “the Yiddish Maeterlinck” because of his symbolist inclinations, is considered the founder of Europe’s Yiddish art theatre before World War I. He’s probably best known for his play GREEN FIELDS (1916), made into a classic of the Yiddish cinema in 1937. Sometime in the 1970s, I served as adviser on an MFA thesis production of it directed by Diane Cypkin, who remains an active promoter of Yiddish theatre and musical culture. I remember it as a charming pastoral comedy, completely unlike the darkly ambiguous, moodily poetic, and regrettably soporific ON THE OTHER SIDE OF THE RIVER (Oif Yener Zeit Taikh) now being presented at the Here Arts Center by the New Worlds Theatre Project. This group, founded in 2005, is devoted to the revival in English translation of the more artistically literary plays of early 20th-century Yiddish theatre, especially if—unlike THE DYBBUK or GOD OF VENGEANCE—they’ve been neglected or forgotten. This is not the kind of sentimental, hammy but kosher entertainment that comes to mind when many think of Yiddish theatre; instead it's comparable, at least in intention, with the more experimental work associated with the European avant-garde.

The characters in ON THE OTHER SIDE OF THE RIVER have Jewish-sounding names, and the grandfather and grandmother are referred to as Zeyde and Bobe (to use the program’s spellings), but there’s little else about the play that smacks of Jewish life or Yiddishkeit. Originally written in Hebrew, first produced in Russian, and then translated into Yiddish, the play has now been rendered into English by Ellen Perecman, New Worlds’ founder and producing artistic director.

Whereas Hirshbein’s longer plays—dealing with peasant life—have cozily accessible plots, ON THE OTHER SIDE OF THE RIVER is heavy on atmospherics and imagery but light on action and story. It uses images of blindness and sight, darkness and light, water and dryness, fire and ice, cold and warmth, and a river and ferryboat (bringing the River Styx and Charon’s ferry to mind). Hirshbein’s play, which emphasizes love's life-affirming but also destructive power, seems directly influenced by Maeterlinck’s early one acts, in which childbirth, death, blindness, old men, mysticism, and subtextual religiosity play a role, and in which audiences are expected to intuit meanings not intellectually but through their feelings and imaginations.

I’ve provided a full plot summary at the end of this review for interested readers, but here I’ll confine myself to only a brief outline. ON THE OTHER SIDE OF THE RIVER, which begins during a winter storm and ends when another storm erupts on a summer eve, concerns a blind grandfather, Menashe (David Greenspan), alone with his granddaughter, Mir’l (Jane Cortney), as the river waters rise in the darkness, eventually washing their house away. We learn that Mir’l’s mother died in childbirth, of a magic amulet her mother got from a holy man and that Mir’l now wears, and of how the river killed Mir’l’s father and caused Menashe’s blindness. The flood destroys the house, and Menashe freezes to death after seeing visions of angels on their way. A Stranger (David Arkema)—is he an angel?—arrives, saying his ferry, headed for the other side, was sunk in the storm; he refuses to let Mir’l die, promising her a palace-filled future, and she consents to live. The Stranger vanishes, time passes, and one summer evening at the riverside, Mir’l, who seems to have lost her mind, speaks of her yearning to join the Stranger on the other side. When another storm threatens, she rejects her grandmother Yakhne’s (Christine Siracusa) plea to return home, hoping the storm will bring the Stranger back to her. As the weather worsens, Mir’l has visions and, before long, seeking to be saved, dashes into the rising river.

David Greenspan gives an intense performance as Menashe, blending realism and non-realism in his high-pitched line readings and almost puppet-like movements. (Mr. Greenspan is also sharing his talents in PUNK ROCK at the Lucille Lortel, where he comes on late in the play.) Capable work is done as well by Ms. Cortney, Ms. Siracusa, and David Arkema, but the stylized quality of the writing and performances prevent any emotional involvement in what happens to them.

Patrick Rizzotti’s minimal set, propless except for a chair in the first scene, evokes a world of water via wrinkled, vertical swathes of stiffened, translucent cloth on screens and borders beautifully lit by Nick Solyom in combination with the projections of Bart Cortright. M. Meriwether Snipes’s simple costumes ably convey a sense of who the characters are. Shannon Sindelar’s simplified staging ignores Hirshbein’s explicit stage directions, depending on lighting and sound effects to establish the cataclysmic events in the audience’s imagination. She also blurs locales and seasonal shifts, as when she sets the final scene, not at a riverbank in summer, as Hirshbein does, but behind the screens, almost as if it’s taking place under water. What’s vague in the writing is thus even vaguer in performance.


I wish I could praise New Worlds for having uncovered a lost gem in ON THE OTHER SIDE OF THE RIVER. After a promising beginning, however, the play’s lack of compelling action, its one-note characters, the continual underscoring of Erik T. Lawson’s eerie mood music, the thematic obliqueness, and the need to watch some scenes through translucent fabric may eventually have the effect of a hypnotist’s watch swinging back and forth before your eyes.

It’s deep winter in the dead of night, and we’re somewhere on the banks of a rising river where the whistling wind, rushing water, and ice floes crashing into one another can be heard. A nearly blind old man, Menashe, recalls the thrill of sailing a ferryboat across the river in rough waters, but present conditions would make that impossible. He tells his granddaughter, Mir’l, who can’t fall asleep, about a time when five days of nonstop rain caused the river to rise and destroy a ferryboat. He recounts the story of Mir’l’s mother giving birth to her as the river flooded and dying before seeing her baby, and insists she wear her mother’s magic amulet to protect her from harm. The amulet, which Menashe says Mir’l must never look inside, was the gift of a mysterious holy man whose blessing also was a curse. The water also killed Mir’l’s father and caused Menashe’s blindness. Menashe, who senses his imminent death, pronounces Mir’l the pure child of sinless parents, but she seems to be burdened by guilty feelings.

Meanwhile, the waters seep into the house and Mir’l thinks someone is outside. She expresses great fear of what’s out there and also of her zeyde, whose eyes seem to reveal evil. The house is inundated and all goes dark although Menashe sees a holy angel coming to their rescue. Mir’l climbs through the window to reach the angel and his torch-bearing fellow angels and the house is destroyed. Menashe, having followed a strange light, finds himself on higher, dryer ground, needing to locate Mir’l, although his body is getting colder. He hears her voice saying she’s cold, and offers to warm her. She feels to him like a block of ice. Seeking the light from her amulet, he learns that someone tore it from her in the flood. Menashe then grows warmer, thinking he sees his late daughter in heaven.

A Stranger (David Arkema) is heard, crying out to be saved from death. The Stranger finds Mir’l and her grandfather, who is dead. Mir’l too wishes to die, but the Stranger won’t let her, now that the ferry he was on was destroyed and he never made it to the other side. Life must be preserved, he insists, and, after he insists that Mir’l and he cling to each other tightly to keep each other warm through the bitter night, she begins to feel the heat returning to her body. The Stranger promises a happy future, including jeweled palaces, and when she says she can’t understand him he declares that feeling can be better than understanding. Reluctantly leaving her zeyde’s body, she fearfully follows the Stranger in his quest for life.

The action shifts to a summer evening by the riverside, where Mir’l wishes she could swim across to the other side; she refers to someone, presumably the Stranger, who came to her at night and left her when the sun rose. Her frightened grandmother, Yakhne, comes to take her home, thinking she’s lost her mind. Mir’l, disappointed that the grand promises made by the Stranger have not materialized, wants to go to him on the other side, and tells her grandmother, in whose eyes she sees darkness, to go away or she’ll jump in the river. She longs for the Stranger to come for her in a ferryboat, and fears she’ll die of coldness before he arrives.

A storm threatens; Mir’l, imagining it will bring the Stranger back with his promised palaces, refuses to obey her grandmother’s demands that she take refuge, and waits for the river to take her to the other side. Yakhne places her own amulet around Mir’l’s neck, to protect her, but when her granddaughter throws it into the water, Yakhne goes in after it. Mir’l, her heart broken by the Stranger’s disappearance, has visions of fires on the river, and, as she grows ever colder, of her zeyde’s eyes beckoning her. Yakhne tries to take her home, but Mir’l’s madness rages as she thinks the Stranger is coming for her with ruby-studded palaces, and, shouting, “Save me! Save me!” rushes into the waters.