"THE RED SCARE IN SHERIDAN SQUARE" 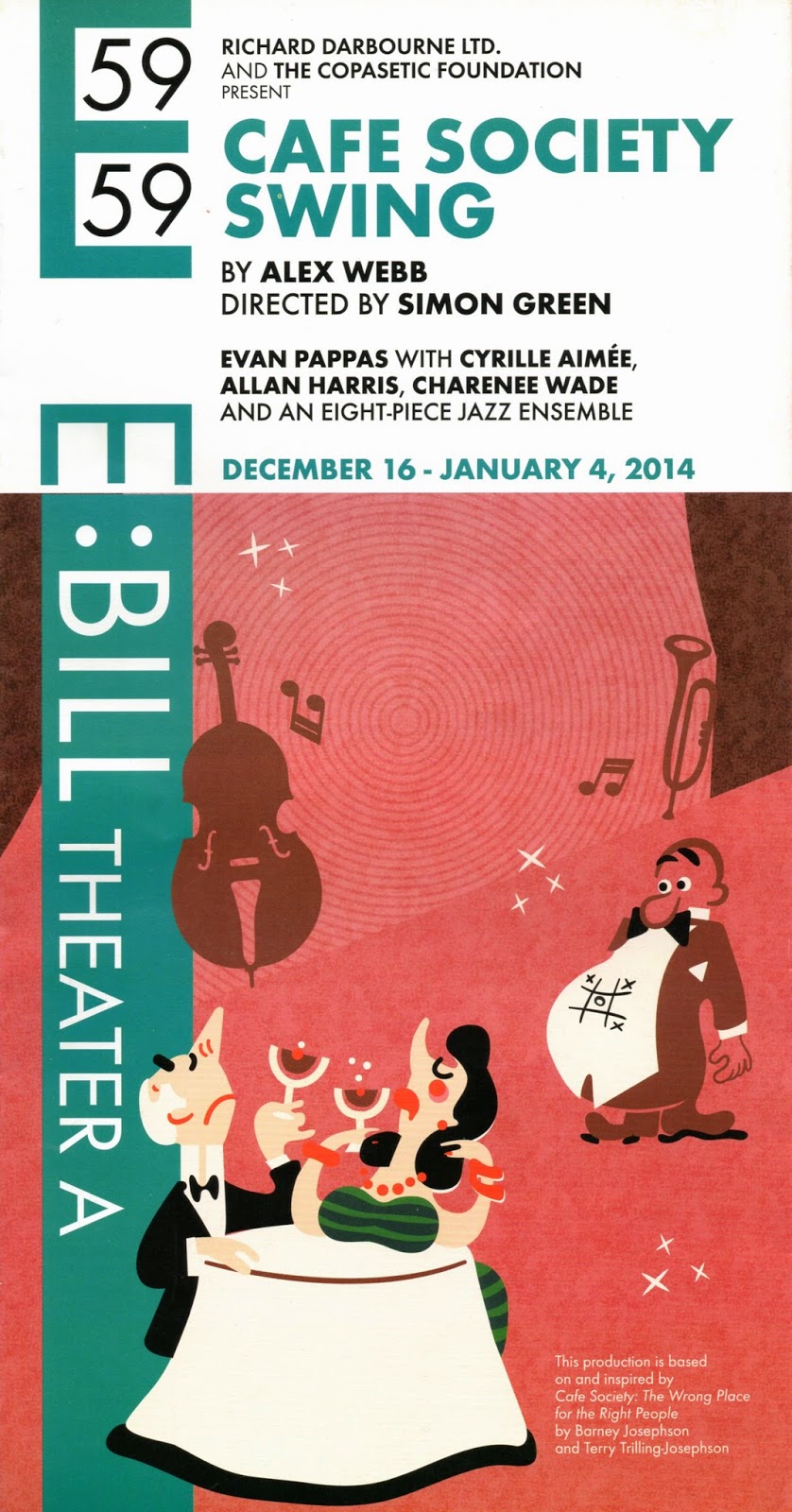 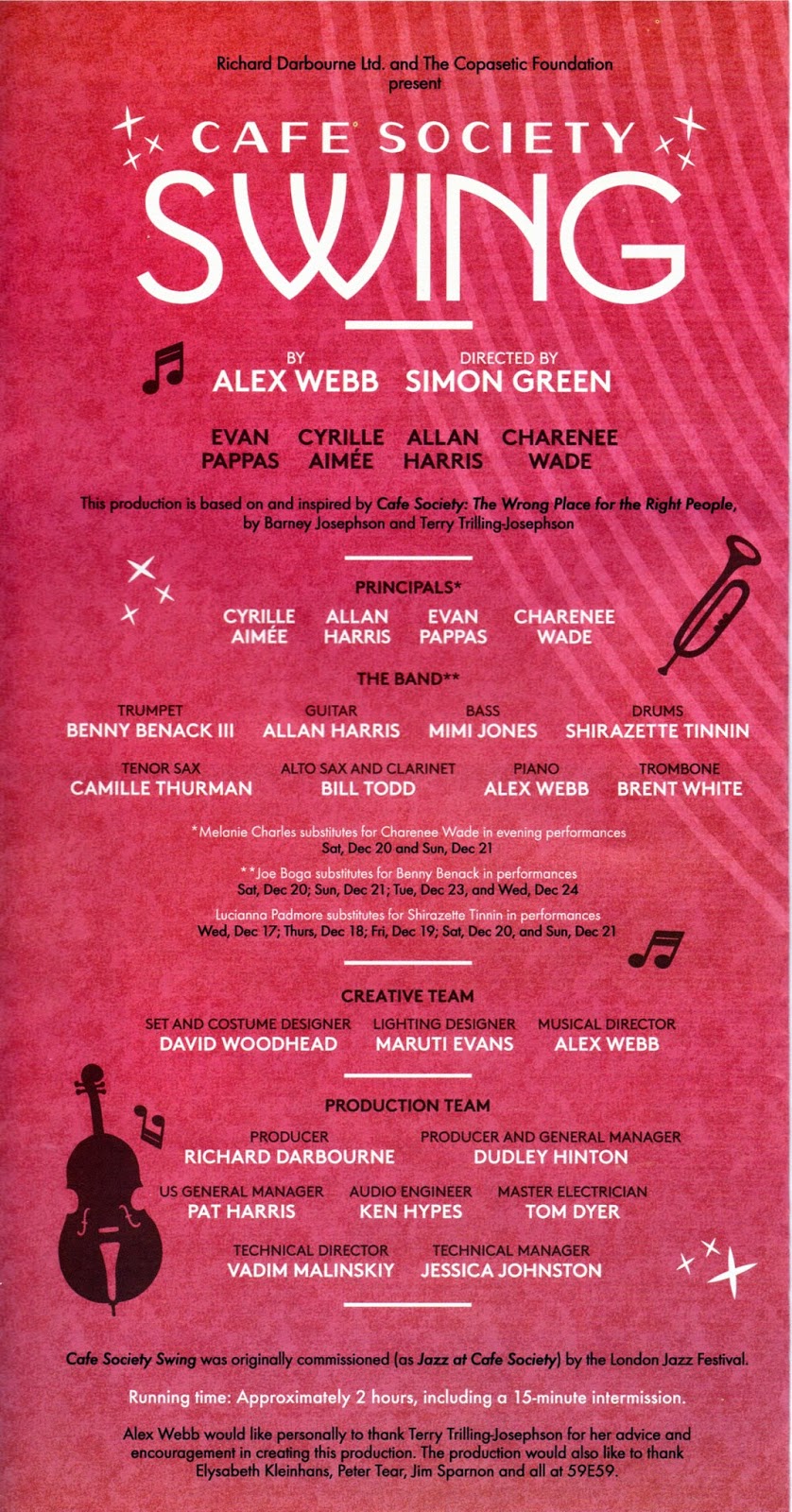 One sign of the cultural difference between Las Vegas and New York is which dead performer it never stops impersonating. In Vegas, of course, it’s Elvis Presley, and in New York—at least of late—it seems to be Billie Holiday. Last season alone, there were two major musical biodramas about Lady Day on New York stages. Well, now she’s back again, if only in a supporting role, in CAFÉ SOCIETY SWING, a cabaret-style revue at 59E59 Theaters that’s nicely sung, is musically vibrant, but is stuck with a lumbering narrative.

The two-hour show is a tribute to the jazz nightclub, Café Society (“The Wrong Place for the Right People”), which opened in the Village at One Sheridan Square in 1938, and to Barney Josephson, its proprietor. The leftist politics of Josephson, son of Russian Jewish immigrants, didn’t sit too well with America’s conservatives during the postwar “Red Scare” years. Café Society, America’s first integrated nightclub, was famous for breaking racial barriers both on stage and among its patrons. Even Harlem’s renowned Cotton Club, despite its black performers, catered mainly to a whites-only clientele. Despite his club’s acclaim, when Josephson’s outspoken brother Leon got in trouble with the House Un-American Activities Committee in 1947 and was sentenced to a year in jail on contempt charges, Café Society’s business tanked. According to Alex Webb’s script (based on Josephson and Terry Trilling-Josephson’s Café Society: The Wrong Place for the Right People) the capper that forced its closing in 1949 was the loss of its license for allegedly selling adulterated liquor.


An ensemble of three excellent singers, Cyrille Aimée, Charenee Wade, and Allan Harris, is backed by a swinging eight-piece band made up of black and white, male and female musicians all of whom deserve to be named: Benny Benack III on trumpet, Mr. Harris on guitar, Mimi Jones on bass, Shirazette Tinnin on drums, Camille Thurman on tenor sax, Bill Todd on alto sax and clarinet, Brent White on trombone, and Alex Webb, the musical director, at the piano.

Evan Pappas, who also sings a couple of numbers, delivers the tired narrative. In Act 1 he's a right-wing Commie-baiting reporter assigned to do a hatchet job on Josephson, that “pinko bagel-bender,” but--surprise!--he winds up learning to admire the guy. In Act 2, Mr. Pappas continues with the biographical spiel, this time in the guise of the nightclub’s white-aproned barkeep. His by-the-numbers anecdotal material includes several lethal attempts at humor. When the bartender mentions having a half-Japanese, half-black kitchen worker, he cracks that “Every December he attacks Pearl Bailey.” Da-da-bum.

Mr. Pappas frequently interrupts his biodata to introduce some famous entertainer, such as Holiday, Josh White, Billy Strayhorn, Big Joe Turner, Lena Horne, or Sarah Vaughan, as well as such less well-remembered names as Susie Reed and Nellie Lutcher. The respective artist—dressed, of course, in attractive period wear (David Woodhead did the costumes)—then steps up to the standing mic and sings. Director Simon Green stages the songs straight, not as “production numbers.”

Many are familiar but always welcome blues and jazz standards, like “What a Little Moonlight Can Do,” “Stormy Weather,” “Rockin’ Chair,” “One Meat Ball,” “What Is This Thing Called Love?,” “Lush Life,” and, of course, “Strange Fruit,” the powerful anti-lynching song, which Holiday introduced at the club in 1939. Predictable as it may be, “Strange Fruit” closes the show on an appropriately emotional level. The very talented Ms. Wade, portraying Holiday, enters with the singer’s trademark gardenia in her hair and delivers the goods in a somewhat exaggerated but reasonably effective emulation of Lady Day’s unique vocal style.


There are few surprises here, although there’s a substantial number of less well-known tunes on the bill, including several new ones in period mode by Mr. Webb himself. A few come with satirical political messages, such as Willie Johnson’s “Stalin Wasn’t Stallin’” Webb’s “Red Scare” and Harold Rome’s “The Investigator’s Song,” sung by Mr. Pappas. Zero Mostel originally performed the latter at a Madison Square Garden rally, not the nightclub, making its inclusion here a bit questionable. But that doesn’t mean it isn’t fun hearing the question, “Who’s gonna investigate the man who investigates the man who’s investigating me?” Mr. Pappas, though, is no Zero Mostel.

David Woodhead’s minimalist set—illuminated by Maruti Evans’s usual lighting magic—provides a bandstand for the musicians, with the piano down right, and a desk down left in Act 1, replaced by a small bar in Act 2. Hanging vertical banners that back the musicians include highlights from the once-famous mural cartoons by Syd Hoff that satirized the swells of what Clare Boothe (before she added Luce to her name) called “café society.”

Shows like this, which gain much of their éclat from the singers they resuscitate, always face the dilemma of how closely they should attempt to recapture the sound of those artists. It seems to me that if the singer’s voice and style can’t be invoked, then the focus shifts to what they’re singing. However, when the presence of a very particular star is emphasized, the audience expects to hear something that somehow resembles what that person is famous for. In CAFÉ SOCIETY SWING, the only singer who sounds at all like the original is Ms. Wade, when she does Billie Holiday. Her Sarah Vaughan has nothing of that distinctive chanteuse's quality, nor, if you were blindfolded, would you recognize Lena Horne singing “Stormy Weather” other than by identifying the singer with the song.

CAFÉ SOCIETY SWING can be recommended as a pleasantly pedagogic, but unexciting, musical-political journey down show biz memory lane. Not only does it lack a compellingly presented narrative, it requires its mortal singers to represent immortal ones. Talented as they are, I still don’t envy them the task.
Posted by Samuel L. Leiter at 6:37 PM