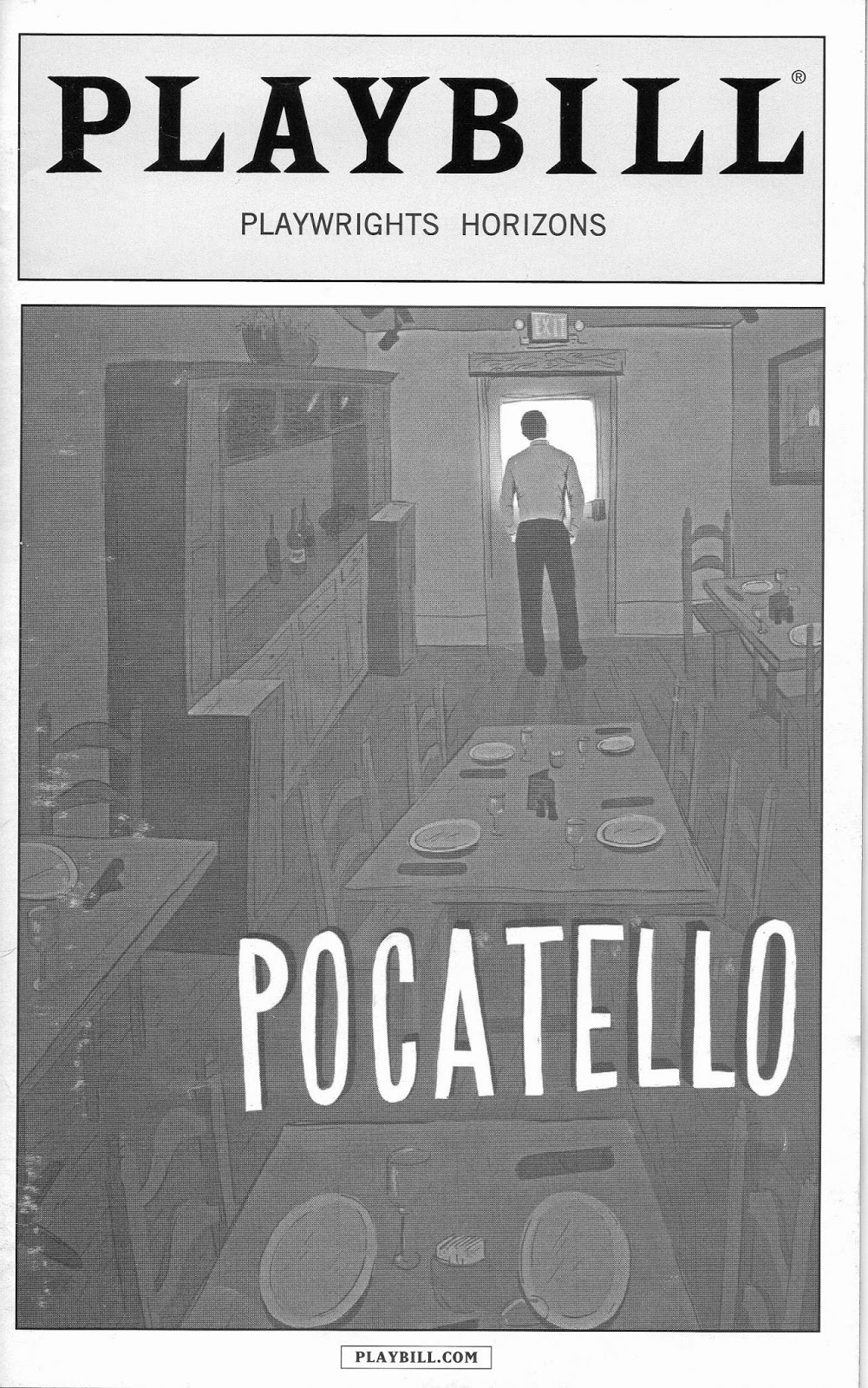 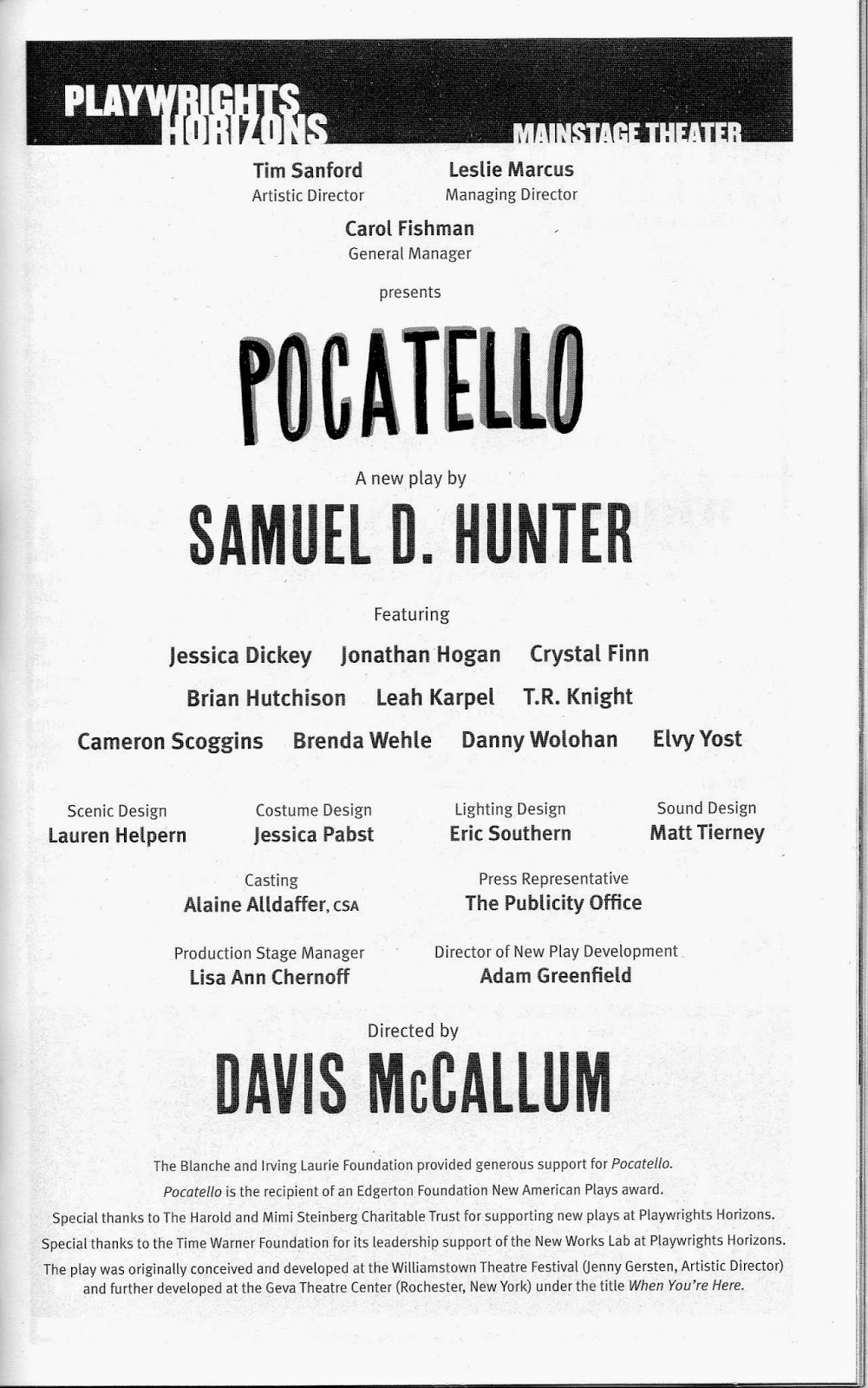 “I was born in a trunk in the Princess Theatre, in Pocatella [sic], Idaho,” sings Judy Garland in A STAR IS BORN. On the other hand, the 10 characters in Samuel D. Hunter’s often engaging but finally unsatisfactory new dramedy, POCATELLO, set in that Idaho city of over 54,000, seem more likely to have been born in a funk. Each of the characters falls somewhere along the dark spectrum of unhappiness. Their malaise stems from the familiar ones of marital discord, teenage angst, sexual orientation, familial dysfunction, creeping senility, economic distress, parental loss, alcoholism, and drug abuse, with agricultural contamination and exploitation, as well as big-box store proliferation, thrown in for good measure.

And for most, whatever’s getting them down isn’t made easier by their feeling trapped in a place that, as they see it, is a dead end with no jobs and no future. Residents of Pocatello, including the over 15,000 students at Idaho State University, which is located there, may be pleased that a New York play by a native Idahoan—a MacArthur genius grantee, no less—bears the town’s name, but I doubt they’ll be thrilled to learn how depressing a place he seems to think it is. And, for the record, the play, which is set in a restaurant, gives the impression there are hardly any others in Pocatello; a quick Google search shows several dozen restaurants serving a wide variety of tastes. Pocatello is a metaphor for how small-town America is becoming a faceless wasteland consisting of nothing but monolithic chain stores, but if you’re going to set the action of a play in an actual place you needn't exaggerate the facts so broadly.

The restaurant in question, which occupies the entire expanse of the Playwrights Horizons stage, is realized in a super-realistic set--designed by Lauren Helpern, with expert lighting by Eric Southern--that mirrors the phony Italian ambiance of any Olive Garden, with booths, tables, wine bottle décor, and other banalities of chain-store homogeneity. The manager is Eddie (T.R. Knight, of “Grey's Anatomy”), a sweet, affable, caring, but deeply troubled gay guy in his mid-30s. For one thing, he’s struggling to keep the place going in the face of news that “corporate” is closing it down; the only patrons we ever see are family members. For another, he’s trying to get his mother, Doris (Brenda Wehle), and brother, Nick (Brian Hutchison)—a successful real estate agent making a brief visit with his wife, Kelly (Crystal Finn)—to reestablish the close family relationship they once shared. Eddie’s homosexuality appears to have caused an irreparable rift that he’ll do anything to repair.

This familial dilemma, with its depiction of a mother who defiantly resists any affection from her loving son, isn’t entirely credible, nor is the sentimental way the situation is eventually resolved just before the final curtain. It does, however, provide in Doris someone whose reactions to what’s going on around her are amusingly eccentric, even if these sharply contrast with the maternal turn she takes toward the end. When Nick, however, gets his big moment to express his frustration with Eddie and Pocatello, he pulls out too many stops for it to be believable. But this is the kind of play where everybody has at least one big scene expressing their despair; with 10 characters, it's not easy to make each such moment ring true.

Some characters are on Eddie’s staff, the faux-family with which he tries to comfort himself from the absence of his real one, just as the restaurant becomes more of his home than the one he lives in, thus motivating him to fight for it. His workers include Troy (Danny Wolohan), a waiter in his mid-30s who, despite a college degree, can’t find more lucrative employment during the recession, and who’s engaged in a constant tussle with his alcoholic wife, Tammy (Jessica Dickey). Another waiter, Max (Cameron Scoggins), is grateful to Eddie for having hired him despite his record as a drug abuser, but can’t stay off the stuff, while the pretty waitress, Isabelle (Elvy Yost), is an orphan whose parents died when she was 12.  Filling out this assortment of underdogs are the septuagenarian Cole (Jonathan Hogan), Troy’s father, who’s showing signs of dementia, and Becky (Leah Karpel), Troy and Tammy’s 17-year-old daughter. Becky, probably the  most interesting character, is boiling with anger at a world in which she can’t trust the food she eats not to be contaminated, considers agricultural practices to be genocidal, and refuses even to have a name because “no one in America” deserves one.

POCATELLO may sound like the makings of a thuddingly depressing soap opera, but Mr. Hunter’s sprightly dialogue and tangle of character interactions manage to keep the atmosphere, if not scintillating, at least lively enough to hold your attention for its intermissionless hour and 40 minutes. An excellent ensemble, led by the excellent Mr. Knight and nicely conducted by director Davis McCallum, brings vitality and humor to what could easily have been a downer. There have been any number of plays like this, with a cast of colorful characters assembled in a single place, like a bar, hotel lobby, or ship, with plot being less important than people, ideas, and dialogue. Its setup, characters, and situations, though, are not especially original or captivating. POCATELLO’s menu is tasty enough but you may find something more nutritious somewhere else.