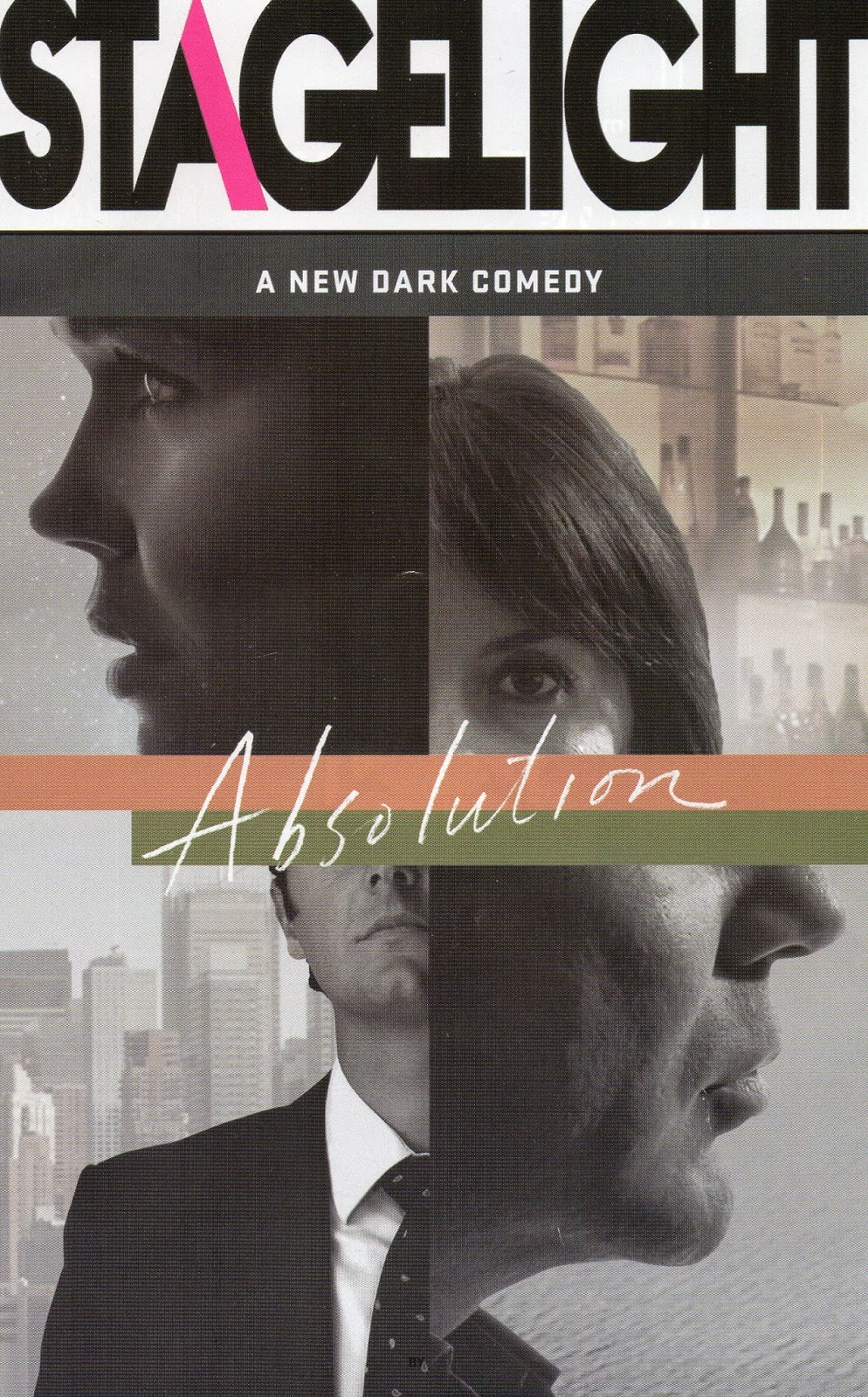 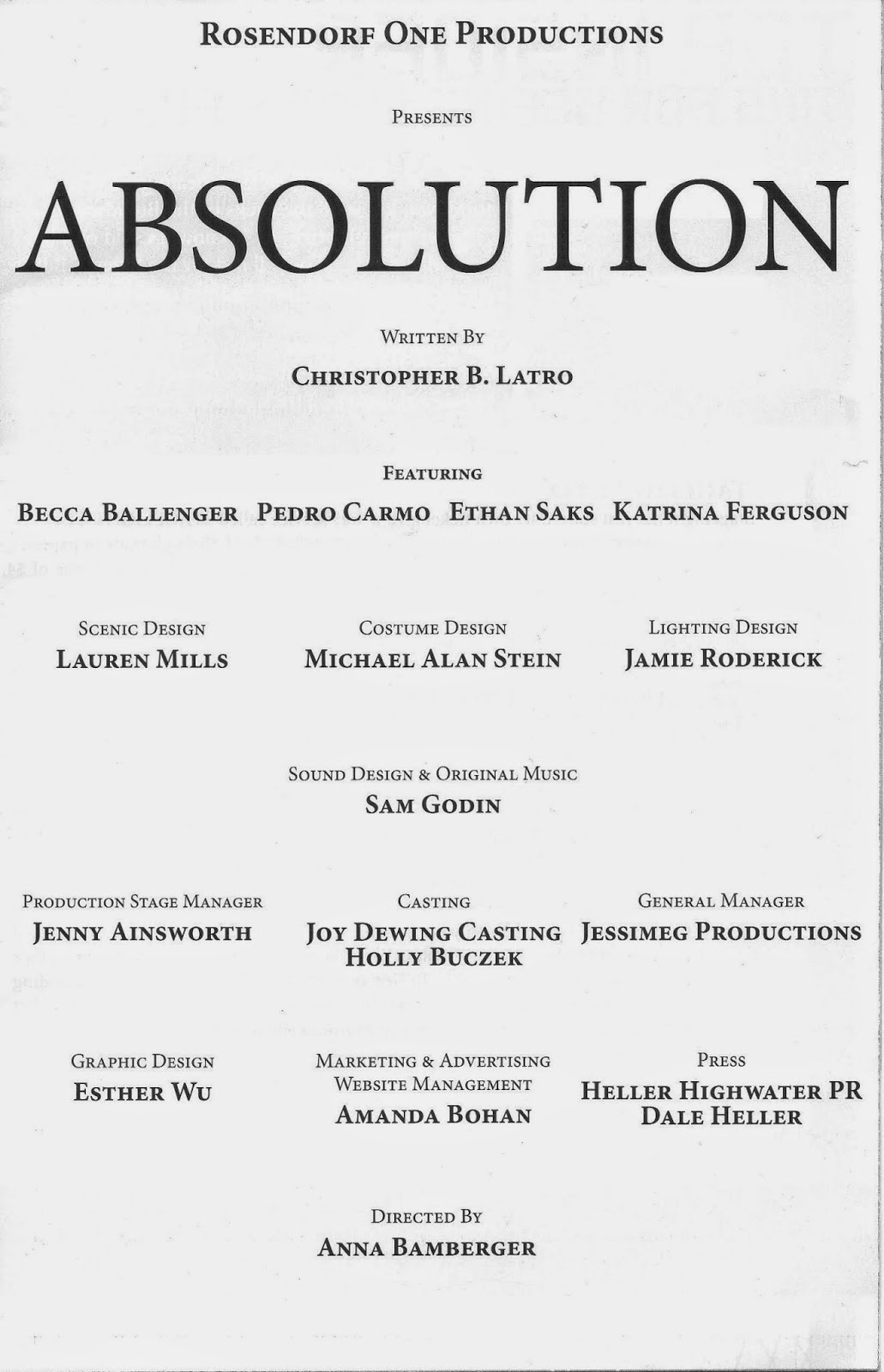 Reviewing theatre can be dangerous. You can sometimes find yourself renditioned to a black site disguised as a theatre where you’re subjected to a barrage of psychological torture in the form of a play. It’s even worse when the play you’re watching has no intermission, and you fear for your safety if you try to escape in mid-performance. Just kidding, of course, folks, but these thoughts came to mind at St. Luke’s Theatre on Tuesday as I watched the world premiere of Christopher B. Latro’s ABSOLUTION while contemplating the confluence of two news items: 1) the Senate’s report on the CIA’s torture program and 2) the controversy over Jane Kaufman’s Wall Street Journal article, “Confessions of a Broadway Bolter,” about her practice of leaving dull shows at intermission, even though she’s privileged to receive comps because of her position as a cultural reporter.

Most of my fellow reviewers would never think of walking out on even the most boring or artistically deficient shows, either during the performance or at intermission, unless an emergency arose. We adhere to Emperor Hirohito’s advice to his defeated nation to endure the unendurable. And that’s what anyone—whether there on comps or purchased tickets—who attends ABSOLUTION will have to do, unless they don’t mind escaping before the 90-minute, intermissionless play concludes.

The play’s publicity synopsis reads: “Absolution is the story of two bankers, their lovers, and the things they love the most: money, power, and satisfaction. As their fast-paced games unfold, a thrilling spiral of ambition, love and betrayal unravels.” As this suggests, the play is about the dog-eat-dog world of big-time moneymaking, a theme much more effectively expressed in the various movies that have excoriated Wall Street in recent years. This “new dark comedy”as it’s billed, focuses on what happens when the 40ish Angelo (Pedro Carma), who heads a successful investment firm, hires the ambitious young trader, Ethan (Ethan Saks). Ethan quickly displays aggressive tactics in his desire to move up the ladder. His ambitions are fueled by the need to pay for his rising expenses, many of them tied to the demands of his vain, free-spending fiancee, Marie (Becca Ballenger), who practically defines conspicuous consumption. Angelo, for his part, pairs up with a sophisticated hotty named Gabrielle (Katrina Ferguson), and the play charts the business and personal complications that entangle this ruthless foursome.

Sad to say, ABSOLUTION fails to provide even 30 seconds that ring true; the plotting is clumsy, the characters are cardboard, and the dialogue is patently artificial. There are numerous faux-poetic monologues, some in prose so purple it would make Mikhail Gorbachev hide his forehead in shame; moreover, the overly formal, almost conjunction-free syntax, has that phony sound you often hear in plays poorly translated from other languages.

The four actors are totally at sea with this material. An experienced theatre journalist who saw the same performance told me she’d never seen such bad acting; I disagreed, thinking the fault lay not only in the pretentious writing but in the amateurish direction of Anna Bamberger, who fails to evoke any sense of truth, either in the characterizations or in the staging, during which the actors often barely relate to one another. Nor is the work well served by sound designer Sam Godin, who provides offstage voices and phone rings from a poorly amped speaker overhead at stage left, when the sounds are supposed to be coming from center or right.

The unit set by Lauren Mills and lighting by Jamie Roderick are passable, but the greatest effort seems to have gone into Micheal Alan Stein’s costumes, particularly those worn by Ms. Ballenger and Ms. Ferguson, both of whom have the figures to do their emphatically chic duds justice. (Production photos on the show's Facebook page show several outfits different from what the actresses wear in performance, and the boyish bob Ms. Ferguson wears on stage is more flattering than the one in the pictures.) One might ask whether Ms. Ferguson, who comes to work in a skintight, scarlet dress with an elaborate necklace, looking more like a movie star than an executive, isn’t vastly overdressed. On the other hand, looking at her in this eye-catching getup is a welcome distraction from ABSOLUTION. For that alone it serves a useful purpose, although I doubt there’s anything that can absolve this misfire from its multitude of other sins.