"Better Yet, The Spoiled" 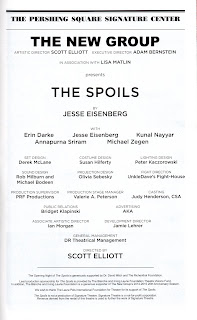 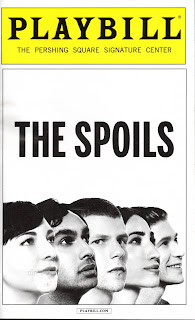 At 31, Jesse Eisenberg (THE SOCIAL NETWORK) has crafted a successful stage and (especially) film career playing geeky, gawky, gangly, speed-talking, smart but socially inept young men. He’s also been gaining traction as a playwright, with three produced plays to his credit, including one, THE REVISIONIST (2013), which costarred Vanessa Redgrave. Given his quirky physical mannerisms, his nervous intensity, and his insecure East Coast Jew persona, he vaguely suggests a latter-day Woody Allen, but one whose comic vibe is quite a ways from Allen's; cast in his latest play, THE SPOILS, as an unpleasant neurotic, his charm quotient is insufficient to overcome his role’s boorishness or to gain much sympathy for his angst.

The play itself is a very well-acted, often funny, but sketchy comedy, excellently directed for The New Group by Scott Elliott, in which Mr. Eisenberg returns to the bromance genre of his first play, ASUNCION (2011). In it he portrayed an unappealing wannabe journalist, while in THE SPOILS he’s Ben, an unappealing wannabe filmmaker in his late 20s who talks big about his aspirations but is little more than talk. Instead, he’s an obnoxious, self-centered, spoiled, pot-smoking, profanity-prone, cynical man-child, a Jew with no compunctions about stereotyping other Jews. Although he has a few moments where he seems, if not likable then at least decent, his chief redeeming feature is his gift for smarmy wisecracks and insights.
Ben, who left NYU’s film school (whether voluntarily or not isn't clear), lives in an expensive Manhattan apartment (your usual West Elm/Pottery Barn pad, designed by Derek McLane) bought for him by his wealthy father, who also pays for his other expenses. His roommate, living there rent-free, is Kalyan (Kunal Nayyar, “The Big Bang Theory”), a Nepalese grad student studying finance at NYU. One of THE SPOILS’s  big problems is making us accept why anybody would want to be in Ben’s emotionally needy world for more than five minutes, rent-free or not; Kalyan, a sweet, well-balanced, mildly witty antidote to Ben’s kvetching, wants to pay the rent, but Ben, needing some kind of hold over his friend, refuses.
The plot thickens when Ben tells Kalyan that he’s run into a childhood friend named Ted (Michael Zegen), whom he hasn’t seen in 10 years. Ted, now a successful Wall Street banker, is getting married to Sarah (Erin Darke), Ben’s first crush. The envious Ben has Ted over for drinks, then gets the friendly, self-deprecating, but gullible guy, who somehow finds Ben’s sarcasm hilarious, to bring Sarah with him for a Nepalese dinner cooked by Kalyan. Ben, whose arrested development borders on the pathological, turns his attention to winning Sarah from Ted.
As we wait for the deluded hero to meet his Waterloo, the two-hours-and-twenty-minute play is puffed out with comic banter, the detailed recall of grade-school memories (including a disgusting scatological dream Ben had when he was eight and that he describes twice), the amusing PowerPoint presentations Kalyan prepares to explain football and Nepalese food, the screening of an amateurish scene Ben has filmed to impress Sarah, Kalyan’s attempt to get a job at Ted’s firm, Kalyan’s relationship with the feisty Reshma, and additional expository but mostly superfluous material.
As in some of his other roles, including THE REVISIONIST, Mr. Eisenberg is a nonstop assortment of familiar tics, sometimes suggesting a bunch of exposed nerve endings. Always intense and focused, he gabbles at Mach speed; shoots his arms out for emphasis; hits his chest; constantly touches his costars with chin tucks, facial pats, shoulder jabs, and hugs; covers his eyes with his hands pressed flat against his face when upset; and runs his fingers through his hair. Instead of sitting, he slouches; when he stands, he balances on the balls of his feet, as if ready to spring. He's perfectly convincing but there's just so much of him one can take.
I’m not sure what the spoils referred to in the title are, but I do know that the victors are the fine actors surrounding Mr. Eisenberg, each able to make their characters believable despite circumstances that sometimes strain credibility. Mr. Zegan is delightful as the old friend whose good nature allows Ben to get away with stuff deserving a punch in the mouth. Mr. Nayyar is terrific as the complacent, supportive roommate who finally can take no more and lands the blow Ted would never think to throw; Ms. Darke is every inch the grounded Sarah, despite the script’s exaggeration of her credulity; and Ms. Sriram, as Reshma, who has Ben’s number from the start, is great at lacerating Ben with cutting irony. Mr. Elliot deftly orchestrates the fast-paced dialogue so that everyone listens and behaves with authenticity.

THE SPOILS offers a troubled script featuring a miserable leading character. Fine as the production is, it has about it the taste of something spoiled.