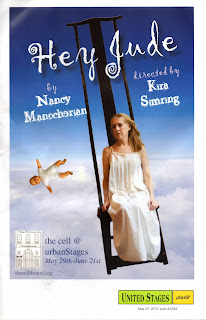 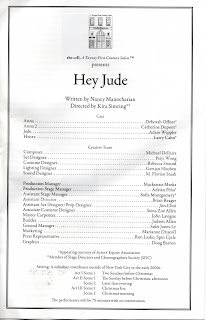 For HEY JUDE, Nancy Manocherian’s new play, produced by the usually dependable company called the cell (founded by Ms. Manocherian), the small but fairly deep stage has been filled all the way to its back wall by designer Peiyi Wong to represent the interior of a blandly decorated, white-walled suburban townhouse outside of New York City. Up front is a living room, with a work/dining table against a wall at one side and a sectional sofa at center. The entrance door can be seen through an upstage arch leading into a foyer area. Upstage left is a partly decorated Christmas tree. Up right is a marimba.
This is the home of Anna Moses (Deborah Offner), her husband Henry (Larry Cahn), and their adopted son, Jude (Adam Weppler). Anna's 55, hippieish, Beatles fixated, and convinced by her Catholic faith that Jesus can solve all problems; Henry, a Jewish atheist, is a former high school football star who spends most of his time sleeping on the sofa or watching football on TV; and Jude (named for the Beatles song that gives the play its title) is an 18-year-old, guitar-playing, angst-ridden, highly intelligent youth, who uses words like “entropy” and “conundrum” and is conversant with Calder, Einstein, and Kafka. Someone else lives here, too, but only in Anna’s imagination; she’s Anna 2 (Catherine Dupont), Anna’s “inner voice,” a marimba-playing alter ego, dressed in a white shift, and considerably younger than the real Anna. Oh, yes, there’s also a baby doll named Lucy (think another Beatles’ song). For some unexplained reason, the year is 2007, Act 1 being the Sunday before Christmas, Act 2 Christmas Eve.
Unhappily, very little of consequence happens during HEY JUDE’s mostly listless 80 intermissionless minutes. An aura of vagueness and surreality hovers about the play, which sometimes is so dreary it’s as if someone were lying dead in the next room and the actors—all of whom have done much better work—were afraid of being disrespectful. Death in fact, is one of the themes that wends its way through this dull exercise in family dysfunction, mental illness, and the meaning of faith.

Some scenes are purely imaginary, since they arise out of the interplay between Anna and her avatar during their now friendly, now hostile discussions, which, like the chats Anna has with Jude, are filled with wordplay. Occasionally, the repartee is clever enough to inspire gentle titters, but usually, because of the low-key direction and lugubrious performances by actors who've done better work elsewhere, it resembles artistic Ambien.

One principal issue the play deals with is the self-doubting, weed-smoking Jude’s preoccupation with learning from his adoptive mother who his birth mother is. Then there's the self-esteem of Anna, whose conversations with herself suggest she’s not all there; ultimately, her soap opera-like dark secrets will be exposed, partly through a journal she carelessly leaves lying around. There's also Henry’s dementia, which takes forever to become evident. And we mustn't overlook the play's concern with religious faith. Jude, at one point, asks if cockroaches have souls, which may be why Ms. Manocherian infests the house with roaches.
Gertjan Houben’s frequently varied lighting helps greatly, and Rebecca Freund’s costumes are appropriate, but when a play's most exciting moments are a middle-aged woman's standing on her head while doing yoga, chasing after a cockroach, or struggling over a knife with someone who isn't there, you wait politely for it all to whimper to its end so you can return to the drama of real life.

OTHER VIEWPOINTS:
Theater Pizzazz
Theater in the Now
Artists without Walls