"A Play to Sink Your Teeth Into" 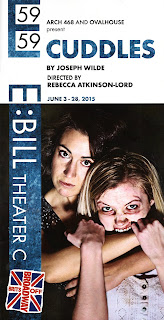 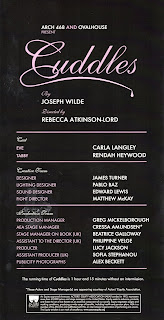 A friend, who loves the theatre so much she’ll see anything, declined my invitation to CUDDLES, Joseph Wilde’s engrossing, brilliantly performed, two-character vampire play, now being shown as part of this year’s Brits Off Broadway festival at 59E59 Theaters. (It was originally produced in England by Arch 468 and Ovalhouse.) Her reason? She had no interest in vampire plays. Not that there are that many, of course, at least not in comparison to the movies, although St. Ann’s Warehouse recently produced the acclaimed LET THE RIGHT ONE IN, itself based on two movies (a Swedish one and its English adaptation). That work is about a 12-year-old female bloodsucker, while CUDDLES focuses on a 13-year-old girl named Eve.


Eve (Carla Langley) lives in a squalid, windowless, attic-like room (well designed by James Turner) whose walls and floor are covered with faded newspapers and splatters of what looks like dried blood. Upstage is a small bed with metal foot and headboards, and down left a toddler’s table and chair. There are some books and a pair of pails, one green, one red, to serve as toilets. Skinny, pale as snow, dirty, and her face often smeared with blood, the barefoot girl wears only a soiled, bloodstained t-shirt and filthy panties. She couldn't be more feral.
When we first see her she’s sitting in eerie darkness, a flashlight illuminating her face as she recites the once upon a time—but, we’ll soon see, self-referential—story of a king and queen who doted on their beautiful daughter but hoped for a son, as only a son could inherit the kingdom. As the years passed without one being born, the king cursed and the princess longed for a sister. After 13 years, a baby girl mysteriously appeared on the royal bed, to the king and queen’s dismay, and this “monster” was hidden away in a tower, where she was raised by the princess, “all alone.”

Eve’s story ends as her sister, the strikingly attractive, 30ish Tabby (Rendah Heywood), appears, her voluptuous figure sheathed in a long-sleeved, skintight, black dress contrasting distinctly with the jittery, grubby girl. To Eve, of whose existence no one knows, Tabby is her protectress, leaving the “castle” each day, and returning to feed and care for her, “except at weekends.” Tabby taught Eve to read, and her mind is filled with fantasy figures from the Harry Potter books (her favorites) and fairy tales about characters like Rapunzel and Prince Charming.
The action shifts from the claustrophobic bedroom—Eve’s “safe place,” protecting her from harm—to Tabby’s outside world. Pablo Baz’s expert lighting, which sharply illuminates separate spaces, makes the transitions feasible without the need for scene shifts. The first of these outside scenes shows Tabby in her new office, where, having been promoted, she fires a man who, while teaching her about the business, took sexual advantage of her. We never see this man, Mr. Wallace, nor do we see Steve, the man with whom Tabby falls in love and with whom she frequently talks (we hear only her side of the conversations), but their presence is palpable in the lives of Eve and Tabby. They also show Tabby’s aggressive behavior toward the men in her life. Various scenes are spliced together to go back and forth between Tabby on the outside and Eve on the inside.
The sisters live by a system of passwords, rituals, game playing, and numbered rules. They even have different “levels” of physical affection for the embraces they call “Cuddles.” To sate Eve’s hunger, Tabby periodically allows her to suck blood from her arm, but only so much, for fear, as she tells Eve, of becoming a vampire herself. (“Rule number 13: Never bite the neck.”) When Eve gets out of hand, she’s likely to be chained to the bedframe by a collar and metal leash. Eve behaves as much like an enthusiastic dog as a human, seeking gratification whenever the need arises, be it for blood or sex (she rubs her crotch against a table leg while playing Monopoly). She calls her need for blood the Hunger.
If Tabby’s late, Eve worries she might not return in time to feed her, forcing her to eat herself, piece by piece, “until when you came back I’d be just a head. Screaming.” When Tabby falls in love with Steve—a bizarre relationship given the violent way they met and how Tabby speaks to him—she begins to think that perhaps she can bring Eve into the real world to live like a normal human being and free her from the state of physical and psychological dependency they’ve maintained for all these years. Where this leads will come as a surprise (it did to me), although my companion spotted it coming.

Wilde’s play, expertly directed by Rebecca Atkinson-Lord, beautifully mixes black humor with its more creepy elements (vividly present), using language both vulgar and poetic. It examines the struggle for love and happiness in two desperately twisted people, and how difficult it is to be human. Ms. Heywood brings great authority to the seemingly well-put together Tabby, who, in her own antisocial way, is a monster, but the really spectacular performance belongs to Ms. Langley. Her intense breathing, the way she waits eagerly for Tabby to say or do something, the nervous movements of her hands, the glassy stare in her eyes—everything gives the impression of someone strung out on drugs, waiting for a fix. In fact, the play even suggests that her blood thirst is an addiction. As Tabby tells Eve in what might be an allusion to Kate Moss and “heroin chic”: “Some fashion models literally torture themselves to be as pale and interesting as you.” It’s the kind of totally committed performance critics often call brave, especially since a sizable chunk of it is played topless. Ms. Langley, even in so tiny a space as 59E59’s Theater C, with the first row less than a foot from the actors, shows no inhibitions at all.

One question the play raises is whether Eve is really a vampire. To find out, you'll need to take a bite yourself.