"Swinging the Polyamory Blues Away" 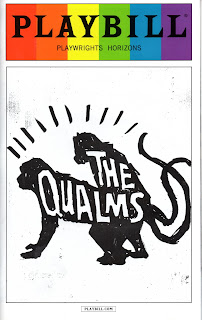 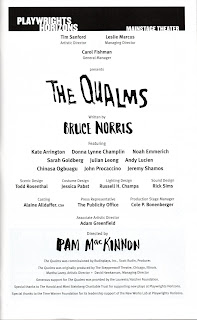 The program cover for Bruce Norris’s* 90-minute one-act, THE QUALMS, at Playwrights Horizons, shows a cartoonish image of a pair of simians doing the nasty, although the animal sex mentioned at length in the script is mainly about creatures of the bovine persuasion. Not that Mr. Norris’s (whose CLYBOURNE PARK snared the Tony and the Pulitzer) entertaining if dramatically skimpy play—originally produced by Chicago’s Steppenwolf Theater—is preoccupied with animal copulation or bestiality, however; cows and bulls are only one of many subjects about which his eight chief characters spend their time talking instead of taking care of the business at hand (or elsewhere). Sex, mainly of the human variety—or, better yet, varieties—is the chief subject on their minds, but they fill their time wrapping their tongues around topics like the meaning of freedom, the difference between a republic and a democracy, the necessity of monogamous marriage, American materialism, pornography, same-sex experimentation, war, etc. Sort of like an expanded episode of Bill Maher’s HBO series.


What brings the play’s four couples together—they're members of a dues-paying group of swingers (to use the old nomenclature)—is a bed and barbecue party (pork loins are the pièce de résistance) at a generically attractive East Coast seaside condo apartment (nicely designed by Todd Rosenthal and lit by Russell H. Champs); at the rear, we can see through sliding glass doors a fancy patio grill and hanging party lights. Among the accessories is a bowl of colorfully packaged condoms; another bowl is reserved for the guests’ smartphones. An offstage “party room” has an air mattress on a white carpet, but no red wine in there, please. Even a sex party has its rules (including separate time limits in the party room for couples and threesomes). The place belongs to Gary (John Procaccino), a bloviating, superannuated hipster, and Teri (Kate Arrington), his pretty, dodo-ish partner with AC/DC tastes, who considers sex the panacea for all the world’s problems: “Like if all the Israelis and the Pakistanis had to have sex with each other?”
The regular guests—there’d be two more but they’re stuck in a storm in Toledo—include Deb (Donna Lynne Champlin), an energetic, sexually adventurous redhead in the body of Melissa McCarthy, and her good-looking, notably swishy, but sexually ambivalent black companion, Ken (Andy Lucien), formerly the reflexologist for Deb’s recently deceased husband; and Roger (Noah Emmerich), a former military guy with a brassy toilet mouth and Libertarian ideals, who bickers with Regine (Chinasa Obguagu), his dishy, French-accented, black girlfriend from Martinique, decked out in sexy, black silk stockings. The first to arrive, though, are newlyweds Chris (Jeremy Shamos) and the sleek blonde Kristy (Sarah Goldberg), newcomers to “the lifestyle,” who met their hosts during a Mexican vacation; they're here because Chris, having lost his cool, wants to test his jealousy limits after learning about a clandestine luncheon Kristy had with her former boyfriend. (Note: Chris and Kristy don't seem to have any connection to the governor of New Jersey.)  Chris’s eventual qualms (which Mr. Norris admits reflect his own) fuel the play’s only significant conflict.
Mr. Norris has a gift for strikingly vivid chitchat spiced with language ranging from the merely bawdy to the outright vulgar, but this language is used in service to what’s essentially a conventional drawing room comedy about a bunch of articulate middle-class people who sit around a living room chattering eagerly about this or that (abetted by mojitos and a weed nebulizer). At long last, someone gets upset about something, sparking a confrontation and thereby leading to the denouement. In this case, Chris, desperate to see if the lifestyle can work for him and Kristy, gradually finds that for all his professed liberalism he’s really rather uneasy about it all, while Kristy, although initially jumpy, is ready to go with the flow, even if it means seeing what playing for the other side is like. Chris, already edgy from Deb's attentions, goes nuts when Regine tries to arouse him with a bout of (rather tame) rough stuff; he expounds in a climactic diatribe that takes every opportunity to trash the purpose of the gathering, unable to prevent the prejudices lurking beneath his liberal exterior from leaping out full blown. The always enjoyable Mr. Shamos makes histrionic hay out of his big scene, but it tends to be forced and stretched beyond the bounds of plausibility.
Under Pam McKinnon’s brightly paced direction, the ensemble's performances are terrific, although if anyone were to be singled out it would be Mr. Shamos for his uptight Chris and Ms. Champlin for her buoyant Deb, a buoyancy Chris manages to painfully deflate. Shortly before this mostly sexless sex comedy ends, Gary notes that when a number of strangers are gathered together, like the audience in a theatre, there’s a strong likelihood that they’ll somehow be sexually connected to others in the same place. At this point, Mr. Norris calls for a surprising bit of fourth-wall smashing of which the actors take full advantage.

While its foreplay is strictly verbal, and the only climax comes when Chris blows his top, there’s still enough amusing titillation to make a visit to THE QUALMS a suitable way to get your theatergoing rocks off.

*My playgoing companion, who thought THE QUALMS “bright, entertaining, funny, and provocative,” later e-mailed me that on her subway trip home she was reading a handout about the play she’d picked up at the theatre. “The young man standing opposite me asked whether I had been to see The Qualms. He must have recognized the handout, because it was folded in such a way that the title was not visible. Then he asked whether it was good. I said yes, and he responded 'I’ll have to get down there.' I googled Bruce Norris just now, and, based on the many photos of him that pop up, I believe the young man on the subway was Bruce himself. Hah!” Only Bruce Norris knows for sure.