"It's a Wise Child that Knows His Own Father" 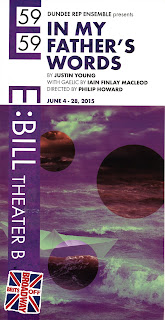 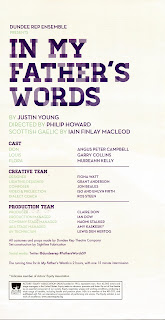 Despite its being part of this year’s Brits Off Broadway festival at 59E59 Theaters, playwright Justin Young’s two-act drama, IN MY FATHER’S WORDS, takes place not in the UK but in a shabby, rundown old house on the edge of Canada’s Lake Ontario, near Toronto; the time is 1992 and 1993. A production of Scotland’s Dundee Rep Ensemble, it deals with an increasingly common dramatic subject, the decline of an aging person into some form of senility, be it dementia or Alzheimer’s, and the difficulties this presents for loved ones. Recent examples include MY MOTHER HAS 4 NOSES, POCATELLO, HEY JUDE, and TOO MUCH, TOO MUCH, TOO MANY. Mr. Young’s sensitive, evocative play, effectively directed by Philip Howard, has a few strong dramatic moments but is generally literary and thoughtful in tone; it also requires some willing suspension of disbelief to allow for its contrivances.
IN MY FATHER’S WORDS involves three characters: Louis Bennett (Garry Collins), a mid-50s classics professor who’s been painstakingly translating Homer’s Odyssey for a decade; his octogenarian father, Don Bennett (Angus Peter Campbell), suffering from dementia; and Flora (Muireann Kelly), a mid-40s caregiver hired by Louis to look after his dad.

Louis hasn’t seen or spoken to Don in 15 years, which is when the woman who was Louis’s mom and Don’s wife died, but he’s shown up at his father’s house because Don was found wandering around, soaked, in a bathrobe, at four a.m. Louis really wants nothing to do with the cantankerous Don, and doesn’t realize at first that his father’s brusque dismissal of him is the result of his mental deterioration, symbolized by the house's disarray. Unable to find a nursing home with an opening, Louis seeks a home care professional, but the only one available is Flora, a single mother, whose resume lacks some of the narrow qualifications the uptight Don thinks he should be seeking. Unable to be present 24/7, and unwilling to leave the old man alone at night, Flora turns the job down, but, as she’s leaving, Don says something in Scottish Gaelic, a tongue in which it just so happens that Flora happens to be fluent.

It takes some time for the preoccupied Louis to grasp that his “uneducated” father is actually speaking this “dead” language and that Flora can understand him, but when he does he hires her and grudgingly agrees to stay there in the evenings until a nursing home placement is possible. While there, he pounds away on his old typewriter at his Odyssey translation (of which he’s managed only 703 of its 12,000 lines in nine years) while listening to a cassette of Glenn Gould on a 1970s tape recorder through humongous headphones. Supertitles are projected upstage to note the lines he’s translating, as well as the English versions of the Gaelic conversations (the latter translated by Iain Finlay MacLeod).
Intercut with these domestic scenes are those of Louis lecturing to his bored college students about the Odyssey (with the audience sitting in as the class), offering commentary emphasizing both the journey of Odysseus and that of his son, Telemachus, whose own odyssey to find his father is an important element of Homer’s epic. In fact, the passage Louis’s translation is stuck on concerns Telemachus’ setting out in search of his long-lost father. The symbolic connections between the alienation of Homer’s father and son and those in the play proper keep recurring (a tobacco tin and a pair of combat boots play important roles), and eventually entail even further revelations concerning not only Don and Louis’s estranged relationship but those between the divorced Louis and his own teenage son, and Don’s with his late father. Flora, who’s determined to root out Don’s history (she likens herself to Nancy Drew), is the catalyzing agent in helping tie all the loose ends together, while also teaching Louis Gaelic and serving as the muse for his translation.
Mr. Young finds so many ways to thread the play with reflections on the difficulty of communication (including the language issues between Louis and his Quebecois wife), and the complexities of translation (the attempt “to get inside someone’s mind”) that, like the plotting, it verges on the schematic; the big reveal toward the end about Don’s origins is touching, even if not totally believable. The characters, especially the anally retentive Louis and the humorous, humane Flora, are drawn with sufficient depth so that, despite the contrivances, you begin to care for them. There’s even a hint of romance between Louis and Flora, but the play wisely lets the audience imagine the potential of such a pairing for itself.
Staged on a spare, abstract set suggesting a rough-hewn cabin, designed by Fiona Watt, dramatically lit by Grant Anderson (with the occasional aid of smoke effects), supplemented by Iso and Emlyn Firth's (not always sharp enough) projections of surtitles and various (often weather-related) images, and enhanced by the imaginative music of Jon Beales, IN MY FATHER’S WORDS is also blessed with fine performances all around.  Mr. Collins is totally convincing as the oblivious, self-involved Louis; his lecture scenes make you feel like taking notes. Ms. Kelly, plump, redheaded, and pretty, makes the dryly ironic Flora a perfect complement to the rigid Louis. And it’s not hard to sympathize with the angry but confused Don of Mr. Campbell.

Sons: with Father's Day looming, you might want to take your dad to this one.

OTHER VIEWPOINTS:
Blog Critics
Curtain Up
Theatre Is Easy