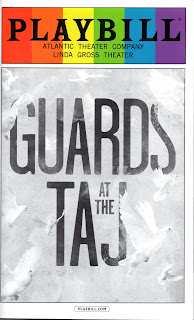 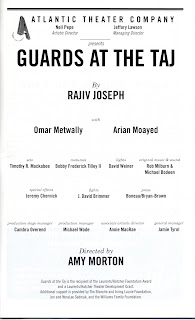 In GUARDS AT THE TAJ, Rajiv Joseph, whose BENGAL TIGER AT THE BAGHDAD ZOO was nominated for the Pulitzer in 2010, has come up with a fascinating subject—the relationship of two Mughal guards to the completion of the Taj Mahal in the Indian city of Agra in 1648. It’s rare enough these days, when plays set in contemporary living rooms and kitchens dominate the mainstream stage, to see a play set in the distant past, much less one treating historical events in a non-Western country.

Mr. Joseph’s 80-minute, intermissionless play, while recounting events in the exotic world of ancient India does so using up-to-date American vernacular, including enough f-bombs to qualify for an R-rating. This choice makes the play’s two characters seem like modern guys we might actually know, increasing our sympathy for their dilemma although diminishing our acceptance of the plot’s veracity. Despite the excellence of its performances by Omar Metwally and Arian Moayed, and the sensitive staging by award-winning Steppenwolf actress Amy Morton, the play, for all its promise, eventually loses credibility (it’s all a myth anyway), stumbles into verbosity, and totters under the weight of its pretensions. 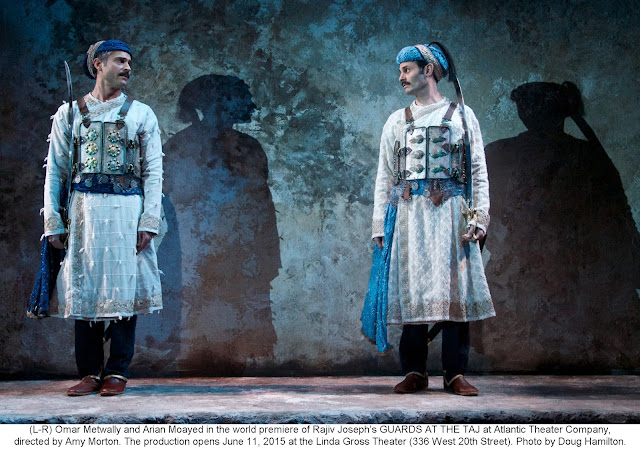 The Taj Mahal (“Crown of Palaces”), of course, is India’s most famous and, to many, most beautiful work of Muslim architecture. This huge, white marble mausoleum, said to have been designed by Persian architect Ustad Isa, was built between 1632 and 1648 at the command of the grief-stricken Mughal king Shah Jahan for the entombment of his most beloved wife (there were three), Mumtaz Mahal. As many as 20,000 workers were employed during the Taj’s sixteen years of construction. There are various undocumented legends, or myths, surrounding the bloody fate of these workers and others, one of which Mr. Joseph uses as the fulcrum of his play, whose tone shifts radically from lighthearted wrangling (although the laughs are too few and far between) to painfully violent activity. 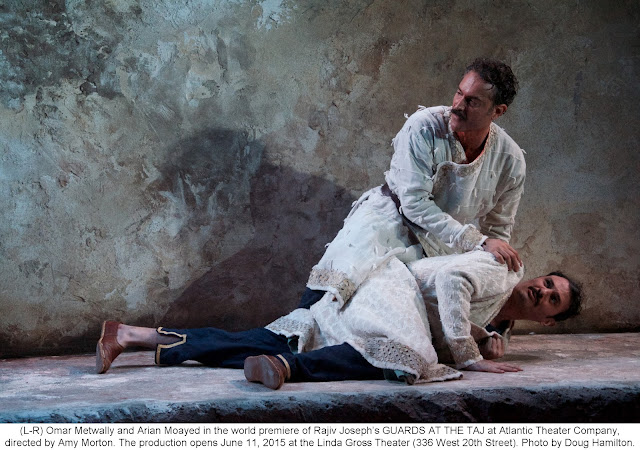 GUARDS AT THE TAJ introduces its eponymous heroes, Humayun (Mr. Metwally) and Babur (Mr. Moayed), by placing them before a stone wall occupying the full width of the Linda Gross Theater’s stage, where, as imperial guards, they keep watch, dressed in the traditional coats and turbans you see in Mughal art of the period. Actually, we first see Humayun take his position around 15 minutes before the play begins, standing at attention, unsheathed sword pointed upward and leaning against his right shoulder, as the chattering audience, barely attending to his presence, files in. 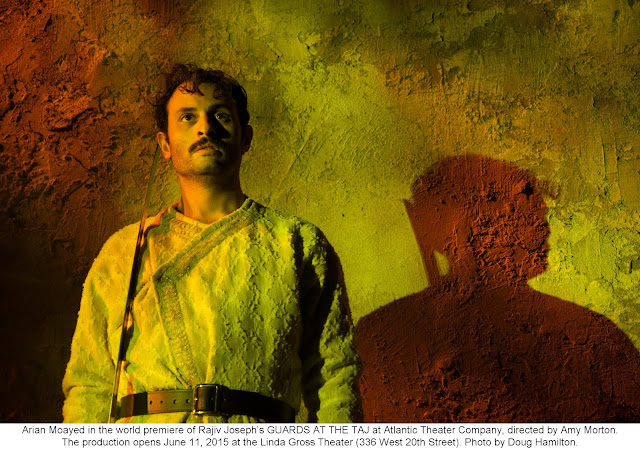 Babur, late for duty on the dawn patrol, arrives and takes his position. Babur is unconventional and childlike, unable to stop prattling despite the strict rules demanding silence, while his childhood friend and current comrade, Humayun, son of the highest ranking guard, is straitlaced and conventional, knowing that even the tiniest infraction could lead to serious punishment. But Babur’s unthinking, authority-challenging effervescence overcomes his fearful friend’s resistance and conversation ensues.

We discover that Shah Jahan is ruthless; that the randy Babur dreams of guarding the imperial harem; that the penalty for blasphemy is much less severe than that for sedition; and that Babur, whose thoughts aspire toward man’s technological improvement, is preoccupied with birds and the stars, even imagining a prototype of the airplane. (Talk of inventions fantasized by the characters practically constitutes a subplot.)

No one outside its protective walls, including this pair, has thus far seen the soon-to-revealed Taj, leading them to speculate about it and to decide whether to take a chance and view it for themselves. Most importantly, Humayun reveals that the architect so angered the emperor by asking him to allow the 20,000 workers the privilege of examining their handiwork that he issued a decree so draconian that it would guarantee that nothing ever again would rival the Taj Mahal in beauty. 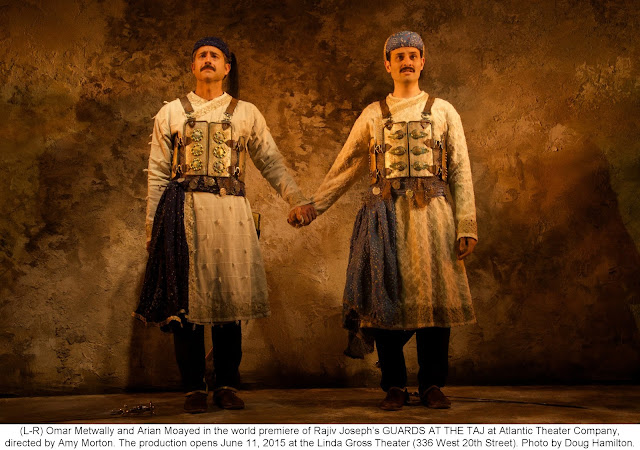 Until now, the play, which simply shows two men standing at attention with barely any movement (physically or plot-wise) as they provide lively exposition seasoned with amusing commentary, begins sliding into improbability, even for a play that injects a 21st-century American sensibility into 17th-century circumstances. At the end of the scene, Humayun tells Babur that they’re to be the ones responsible for carrying out the horrendous royal decree of chopping off all the workers’ hands (as if that would once and for all stop anyone from ever again creating beauty). Since he’s known this all along, keeping it a secret from Babur for so long stretches plausibility.

The scene ends with a beautiful epiphany as the first light breaks and the men dare stare at the Taj Mahal; the wall then rises to expose a dungeon-like, underground room (which seems out of place inside so exquisite an architectural gem), its floor drenched in blood, as are Humayun and Babur, who slosh about in the gore (some of which nearly splashes first-rowers). Babur has chopped off 40,000 hands, Humayun has cauterized the stumps. The psyches of both are scarred, especially Babur’s.

Unfortunately, as they clean up the mess, time-killing chatter fills the air—some of it not unlike a humorless Abbott and Costello routine—about both mundane and philosophical matters. An inane argument erupts, central to the final half of the play, in which the men bicker over which of them is more responsible for having killed "beauty," which they believe their actions will make extinct, and which borders on the pretentious. After several plot twists, one very brutal, the play comes to a bittersweet, touchingly poetic conclusion but it never really regains its traction.

All the production elements are first-rate, including Timothy R. Mackabee’s solid-looking set, Bobby Frederick Tilley II’s authentic-looking period costumes, David Weiner’s exquisite lighting, the original music and sound design of Rob Milburn and Michael Bodeen, and the fighting staged by J. David Brimmer. The actors are excellent at making their characters seem real, but the play itself fights them at too many turns.