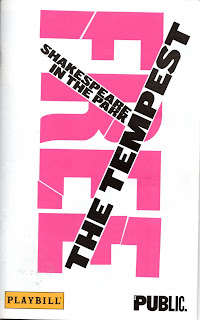 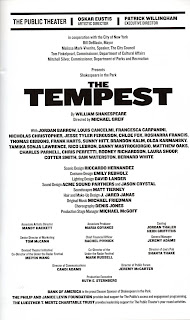 The weather often plays a vital role in one’s appreciation of the plays produced at the Delacorte Theatre each summer by Shakespeare in the Park. Thus, in a sense, seeing THE TEMPEST, set as it is on a tropical island, on the steamiest night of the year couldn’t have been more appropriate. The gnats thronging in the spotlight beams and the fireflies flashing against the blue-black night sky vied for attention with the human activity on the stage. There, a cast led by Sam Waterston as Prospero unfolded the tale of an angry, aging sorcerer taking his revenge, albeit one tempered by forgiveness, on those who dared to deprive him of his title as Duke of Milan, forcing him to live out his days, with his 15-year-old daughter, Miranda (Francesca Carpanini), as master of the spirits and creatures in a fruitful island paradise.
It’s been some time since Shakespeare in the Park tackled THE TEMPEST. Lear deBessonet’s colorful musical adaptation of September 2013, given only three performances with a large company made up of largely of amateur volunteers, was at the Delacorte but wasn’t produced by Shakespeare in the Park, which hasn’t seen a TEMPEST since Patrick Stewart starred as Prospero in 1995. The current production, staged by Michael Greif, is more a squall than a tempest; it tells the story smoothly and efficiently, but only sporadically captures the magical atmosphere this wondrous play requires.
Unlike most of Shakespeare’s plays, which incorporate multiple locales, all of THE TEMPEST, except for the titular storm at sea that begins the action, is set in a single place, the island. But, apart from a bunch of black rocks down right, Riccardo Hernandez’s functional set has little about it suggesting an island atmosphere. Instead of earth or sand we get dark wood planking (with traps and a small elevator platform), and the only hints of an island are the images on upstage panels showing a raging sea, even after the opening tempest has ended but perhaps implying the tempest in Prospero's soul. Running across the stage is one of those increasingly common metal gridwork bridges, like the ones used for rock shows to hang lights on, allowing actors to climb them and to traverse the space overhead. At extreme stage right is a hut-like enclosure where percussionist Arthur Solari remains visible as he accompanies the action with an assortment of excellent musical effects. As usual for Shakespeare in the Park, the lighting (by David Lander) is exceptional.

Mr. Greif's staging is generally uninspired. A significant problem is his failure to come up with ways to gets his actors, especially the ensemble members, off the stage efficiently. Too many scenes end with the actors stranded and having to simply walk off, no longer in character, to one side or into the vomitorium at center while the next scene is beginning.

In essence, this is a straightforward, almost always clear exposition of the play, and those (like my guest, who’d never seen or read the play) being exposed to it for the first time should have no trouble following the story or understanding most of what the actors are saying. Although THE TEMPEST invites imaginative conceptualization, there’s nothing here especially radical.
The costuming, by Emily Rebholz, is in that middle ground combining contemporary modes with Ruritanian touches. The shipwrecked nobles are in late 19th-century military dress; when Mr. Waterston’s whitehaired, white-bearded Prospero dons his gray uniform as the Duke of Milan toward the end he becomes the spitting image of Robert E. Lee in all his Confederate glory. Usually, though, he’s dressed in slacks, sandals, and a white blouse, worn outside. His magic robe is a fringed, silken shawl with a Kabbalah-like symbol outlined on its back; it so closely resembles a Jewish prayer shawl that Mr. Waterston could be playing Rebbe Prospero.
Ariel, given a first-rate, if not especially unique, portrayal by Chris Perfetti as a slender, sylphlike youth with shaved head, keeps his torso bare except for a leather harness that suggests he’s got a master-slave domination thing going on. More problematic is Caliban’s look; despite all the play’s suggestions of his deformities, his fishlike or reptilian aspects, Louis Cancelmi plays him as merely a bare-chested (except for his own leather harness), dirty, muscular man with a bad haircut, poor posture, and odd accent. Both Mr. Perfetti and Mr. Cancelmi offer crisply enunciated portrayals, making it a shame their appearances couldn’t have been more inventively conceived.
The production is in two acts running nearly two and three-quarter hours; the first act, apart from its nicely staged tempest, is fairly boilerplate, but Mr. Greif introduces a number of pretty effects in act two, as in the masque scene with its use of music and dance. The young lovers, Miranda and Ferdinand (Rodney Richardson), are spirited, appealing, and vibrant, and those who play the various courtiers from Milan and Naples are sufficient unto the need. As the scheming clowns, Stephano and Trinculo, Danny Mastrogiorgio (dressed like a character from WAITING FOR GODOT) and Jesse Tyler Ferguson (wearing a jester’s cap), work hard to draw laughs, but they succeed mainly in showing just how hard their tasks are; even their scene with Caliban and the “gabardine,” which can be hilarious, isn't as funny as it deserves.

Sam Waterston, perhaps more closely associated with the Public Theatre and its Shakespeare in the Park productions than any other living actor, has the stature and experience to embody Prospero, but he nonetheless succeeds only in demonstrating how close the role is to that of Charlie Skinner, the gruff but kindly, avuncular news executive he plays on HBO’s “The Newsroom.” Still trim and spry at 74, he falls short when it comes to evoking Prospero’s commanding power. And, while there’s no problem following his words in general, including his fine rendering of the more famous speeches (like “Our revels now are ended”), his long expository speech to Miranda early in the play is muffled and muddled by his growly delivery.
Michael Greif’s revival of THE TEMPEST, while only occasionally satisfying, is nonetheless a suitable introduction to the play. And there’s still nothing like sitting in Central Park under the New York sky on a summer’s eve, watching the world’s greatest playwright show his stuff.
Other Viewpoints:

THE TEMPEST
Delacorte Theatre/Shakespeare in the Park
Central Park at 81st Street, NYC
Through July 5