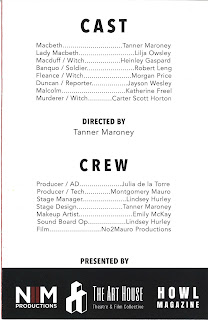 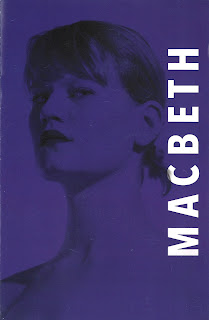 
Shakespeare’s Macbeth is a story of ambition, power, and fate. The Art House Theatre & Film Collective, a young and ambitious Off-Off Broadway company, has created a production focusing on the titular character’s madness and the military context surrounding many of the play's events. The result is an expressive, macho rendition that, at times—because it’s so involved in the passion it's trying to generate—fails to clearly tell the story.
Macbeth, of course, tells the story of a great warrior teased by fate’s temptation. Catalyzed by his wife’s encouragement, he is tragically defeated by his overbearing ambition. The work, constantly being reinterpreted, is open to a range of readings, from feminist to political to supernatural.
The macho-military lens unveils a critical element frequently overlooked: Macbeth is a legendary warrior. He once chopped a man from his nave to his chaps. The production over-emphasizes this, however. Directed by Tanner Maroney, who also plays Macbeth, the work is fixated on Macbeth’s fall into madness and the resulting savagery he creates. Clad in military fatigues and sporting a machine gun, he stomps around stage fuming and screaming. This affects the timbre of everything else.
Such histrionics get in the way of the storytelling because they pulverize the language. The actors shift about awkwardly, abandoning clear recitation. The performance space, designed by Maroney and lit by Montgomery Mauro, is never activated nor made cogent. At times, the actors speak facing upstage, with their backs toward the house, a definite distraction.
Lady Macbeth is played by Lilja Owsley with a Stepford-wife quality, her costume elements suggesting Melania Trump. She and Macbeth are given additional motivation for their actions by a video montage that opens the play, showing the couple playing with their late toddler. This is intriguing: while the text says Macbeth has no children, it never says that about his wife. Introducing a parental element could possibly add interesting colors to these characters.  Unfortunately, once introduced, this notion is never explored. In general, Macbeth’s machismo overshadows Lady Macbeth’s contribution to the drama’s power.
Shakespeare is very difficult. The best Shakespeare advice comes from Hamlet: speak the speech, as I pronounced it to you. Once that’s accomplished, any and every choice is possible. Directors of Macbeth, however, must be careful not to fall into the same trap as Macbeth and let overweening ambition make them stray too far from the Bard.
Macbeth
Bank Street Theater
124 Bank St., NYC
Through May 5

Aron Canter studied theatre theory and alternative performance at The New School and is working toward an Art History masters at Hunter College. He has been a theatre and art critic, a supernumerary at The Metropolitan Opera, and currently works as a medical professional. aron.canter@gmail.com