This event is part of the Onassis Festival 2019: Democracy Is Coming, co-presented by the Public Theater and Onassis US. For more, read Theatre’s Leiter Side’s coverage of Choir! Choir! Choir! and Antigone: The Lonely Planet. 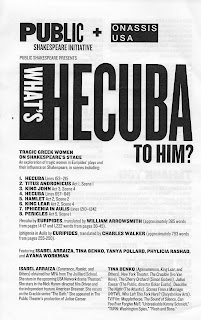 No more scholarly papers for me—from now on I’d like to have all my arguments presented on stage by Phylicia Rashad, please. She, along with an entourage of four other formidable women, served up some serious Shakespeare through an Ancient Greek lens in What’s Hecuba to Him?, a one-night engagement at the Public Theater. Hecuba, perhaps Euripides’ most tragic heroine, was brought to life by Rashad—making the audience sit up in its chairs whenever she approached the mic.

The audience was offered a simple thesis. To paraphrase, it’s widely thought that Shakespeare couldn’t have possibly read Hecuba and many other ancient Greek texts, as they weren’t widely circulated and he wouldn’t have had the access or education. But this night on stage was all about proving Shakespeare was well versed in Hecuba, the evidence being right there in his passages, plots, and characters.

Incidentally, this is where the clever title of the event comes into play— “What’s Hecuba to him?” is of course a famous line from one of Hamlet’s soliloquies. In the context of the evening, it asks what is Hecuba to Shakespeare.

The stage was lined with four microphones, panel-style, and the commentator was Tanya Pollard, Professor of English at Brooklyn College and CUNY’s Graduate Center, where the editor of this blog is Distinguished Professor Emeritus of Theatre. She has literally written the book on Greek tragic women and Shakespeare:

The Greek plays most popular in the period were not male-centered dramas such as Sophocles’ Oedipus, but tragedies by Euripides that focused on raging bereaved mothers and sacrificial virgin daughters, especially Hecuba and Iphigenia.—Abstract,
Greek Tragic Women on Shakespearean Stages

Pollard eloquently offered a series of arguments to support her thesis that the Bard was quite brushed up on his Greek tragic women. There to help her prove it were four actresses performing readings from Euripides and Shakespeare alternately. In other words, Pollard set ‘em up and the ladies knocked them down.

When Tamara in Titus Andronicus appeals to the king to spare her child’s life—it comes from Hecuba (lines 153-215). In both cases, her child is being served up as a sacrificial offering and mom is like WTF. When Constance is grief-stricken over her son in King John—yup, it’s also Hecuba (lines 657-845), as evidenced in the way the speeches parallel each other in structure.

Euripides frequently explored women’s suffering in childbirth. Pollard showed how Shakespeare riffed on these themes. Hamlet (played by a spirited Isabel Arraiza) bemoans being “unpregnant” (the whiner is known for not feeling man or woman enough in this moment), while King Lear (a commanding and really funny Tina Benko) compares his sorrow to a mother’s hysterica passeo (basically a woman afflicted with a wandering womb; I’ll leave you to figure that one out).

The night ended with an extra helping of scholarly geekery; the audience was invited to continue discussions over wine and cheese in the lobby, where Ms. Pollard, the performers, and the Public Shakespeare Initiative team were readily available to chat—how fitting for a democracy-themed festival.